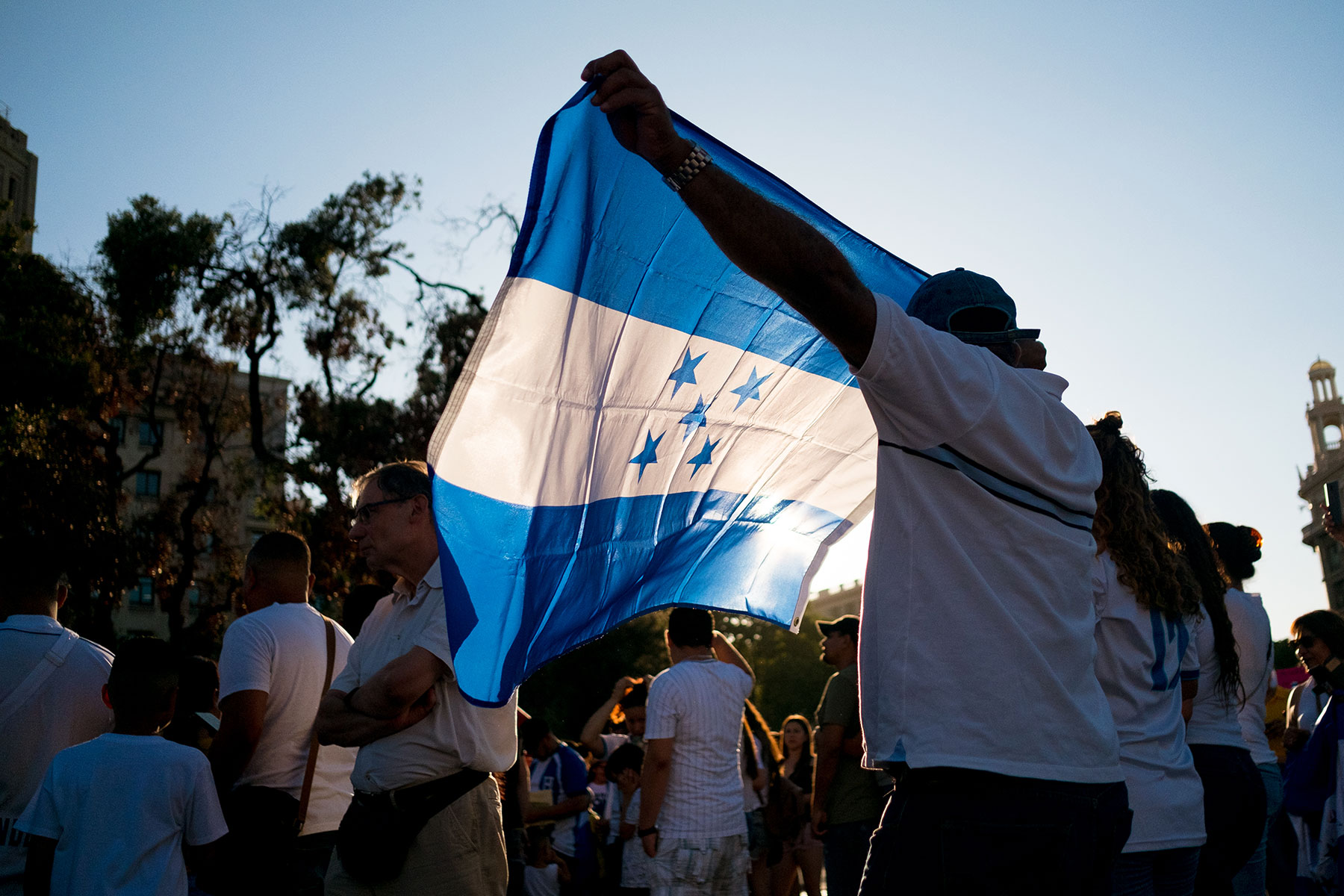 After the pink tide of progressive politics came a brown tidal wave of reaction. The last few years of governance in Latin America have reeked of corruption, repression, and environmental degradation. They will go down in history as the “Sewage Decade,” thanks to Jair Bolsonaro of Brazil, Ivan Duque of Colombia, Daniel Ortega of Nicaragua, Nayib Bukele of El Salvador, Jeanine Anez of Bolivia and Juan Orlando Hernandez of Honduras.

A number of these leaders are still in office. And Chileans may also wade into the wastewater if they elect right-wing populist Jose Antonio Kast, who received the most votes in the first round of presidential elections last month. But Chile notwithstanding, we might finally be seeing some light at the end of this particular sewage tunnel.

This week, Xiomara Castro scored a decisive victory in the presidential election in Honduras, putting an end to the disastrous 12-year reign of an anti-democratic, narcotrafficking regime allied to the United States. As an antidote to this lost decade, Castro offers an unabashedly socialist, feminist, anti-corruption agenda. She has also promised to create a government of national unity.

Building national unity is not going to be easy in one of the poorest countries in Latin America where a wealthy elite still controls all the levers of power. The coup that deposed left-leaning President Manuel Zelaya a dozen years ago divided Honduran society along yet another axis. Xiomara Castro is the wife of Zelaya, so it’s pretty clear which side of that schism she’s on.

Before she can do anything else, however, Castro has to break the power of the drug traffickers who have turned Honduras into a highly efficient narco-state.

Last March, Juan Antonio Hernandez was sentenced in US court to life imprisonment plus 30 years for smuggling 185 tons of cocaine into the United States. He was also fined $158 million. Hernandez is the brother of the departing Honduran president, Juan Orlando Hernandez, who did whatever he could, even hiring a Washington lobby firm for at least half a million dollars, to get his brother acquitted.

This wasn’t just fraternal solidarity. It was naked self-interest. In The New Yorker, John Lee Anderson describes the prosecution’s case, which was ultimately successful. Juan Antonio Hernandez “used millions of dollars from drug sales to finance his party’s elections; on behalf of his brother the President, he had accepted a million-dollar bribe from Joaquín (El Chapo) Guzmán, the head of the Sinaloa cartel. The lead prosecutor called Hernández a ‘uniquely bad character, who, along with his brother, is at the center of years of state-sponsored drug trafficking.’ His criminal behavior, the prosecutor said, had left Honduras ‘one of the principal transshipment points for cocaine in the world” and “one of the most violent places in the world.’”

The outgoing Honduran president has declared his own innocence, though that was increasingly difficult to maintain in the face of evidence that his initials could be found in the financial documentation of the drug enterprise. As president, Hernandez had promised to cooperate with the United States in its war on drugs. Perhaps US officials should have clarified on which side the president was planning to fight — the side of the US government or the side of US drug distributors.

Hernandez is not the only politician who’s been accused of such collusion. Another candidate in the presidential race, Yani Rosenthal, served three years in US prison after pleading guilty to money laundering for the Cachiros drug cartel. Former Honduran President Porfirio Lobo also worked hand in hand with the Cachiros clan, ultimately forcing the Biden administration to issue a travel ban this summer against Lobo and his family. It was a particularly embarrassing moment for President Joe Biden, who had been vice-president when Barack Obama proclaimed Lobo’s “strong commitment to democracy” when he prematurely welcomed Honduras back into the club of democratic nations.

The Honduran government did fight a drug war, but only to the extent that the police eliminated drug lords that competed with the state’s handpicked narcos. Lobo’s police chief, nicknamed El Tigre, has been accused of multiple extrajudicial killings and faces a life behind bars if Honduras gets around to extraditing him to the United States.

Given its location between Colombia and Mexico, Honduras became a logical location for the trans-shipment of cocaine. At one point, an estimated 80% of the cocaine bound for the US passed through the country. That traffic has diminished, but now Honduras is moving up the value-added supply chain by processing more of the raw coca into cocaine.

If Castro, as incoming president, can start ratcheting down the narcotics trade — without getting herself killed or overthrown in a coup — she can start to address the country’s two other major woes: economic despair and the astounding outflow of migrants.

Roughly three out of four Hondurans live at or below the poverty line. Only Guatemala has a worse record in Latin America. The rural population is especially hard hit, the Honduran middle class is minuscule and COVID-19 reversed the modest economic growth the country experienced in recent years.

Hondurans accounted for a disproportionate number of the Central American migrants flowing into Mexico between 2018 and 2021. On top of all those who have already departed, one in five Hondurans has expressed a desire to leave the country. Who can blame them? If they aren’t escaping extreme poverty or the extraordinary violence of the gangs and the government, Hondurans want to leave because of extreme weather exacerbated by climate change.

In 2020, the double shock of Hurricanes Eta and Iota killed 98 people and caused nearly $2 billion of damage. As one resident of a rural community told The Guardian, “I have my suitcases packed, ready to go. We can’t live like this. There’s no future for us here.”

Hope Elsewhere in the Region

In the brown tide of reaction in Latin America, Jair Bolsonaro is the fatberg, a monstrous accumulation of personal excess, political corruption and environmental hazard. During his tenure as Brazilian president, Bolsonaro has presided over a tragic mishandling of COVID-19, the same kind of financial misconduct he promised to eliminate the extraordinary destruction of the Amazon. Even as the Brazilian leader signed on to the deforestation pledge in Glasgow last month, he was delaying the release of a report showing that the destruction of the Amazon increased by 22% over the past year.

But the good news is that Bolsonaro’s popularity has dropped precipitously. In a September poll, nearly 60% of respondents said they would not vote for him “under any circumstances.” And Luiz Inacio Lula da Silva, the former president and leftist stalwart, currently has a 20-point lead in the polling ahead of next October’s election. Of course, a year is a long time, and every so often Bolsonaro flirtatiously reveals his trump card, namely a coup to stay in power.

Last year, Bolivia provided the region with an example of how to turn back a coup when the party of exiled leader Evo Morales won a landslide victory in the elections. Last spring, the interim president, Jeanine Anez and several of her ministers were arrested and charged with terrorism and leading a coup.

Ecuador shifted to the right in the elections last spring, as voters narrowly supported conservative candidate Guillermo Lasso. But the more important development, at least for the long-term future of the country, has been the success of the indigenous party Pachakutik, which won control of half of all the states on its way to becoming the second most powerful party in Congress. Pachakutik not only forcefully rejects the discrimination that the indigenous of Ecuador have experienced, but it also embraces a variety of progressive social reforms and has a robust environmental agenda that revolves around Sumak Kawsay or “living well,” which intersects with the “buen vivir” movement in the region as a whole.

Peru dodged a bullet earlier this year when voters narrowly rejected Keiko Fujimori, the right-wing daughter of disgraced leader Alberto Fujimori. The new president, Pedro Castillo, who comes from humble origins and rose through the ranks as a trade unionist, has put forward a traditional left platform of using the state to lift up marginalized communities. But Castillo is a social conservative — he opposes abortion and same-sex marriage — and has put together a politically mixed government, which may enable him to hold power for longer than his predecessors. He is, after all, Peru’s fifth president in five years.

Not all is rosy in the region. Through fraud and intimidation, Daniel Ortega has effectively made himself leader for life in Nicaragua. Nicolas Maduro continues to rule the failing state of Venezuela. Right-wingers are still in charge in Colombia, Guatemala and Paraguay.

But the victory of Xiomara Castro in Honduras, Pedro Castillo’s earlier win in Peru and the increased power of Pachakutik in Ecuador point to a different kind of future for Latin America, one that is less corrupt, more responsive to economic needs and environmental imperatives and more attune to the realities of indigenous communities. These new leaders have a lot of work to do to clean out the Augean stables where Latin America’s authoritarians and far-right populists have taken up residence and which have backed up with mountains of excreta. But the first step, which the voters of Honduras have just taken, is to stop overloading the waste management system.