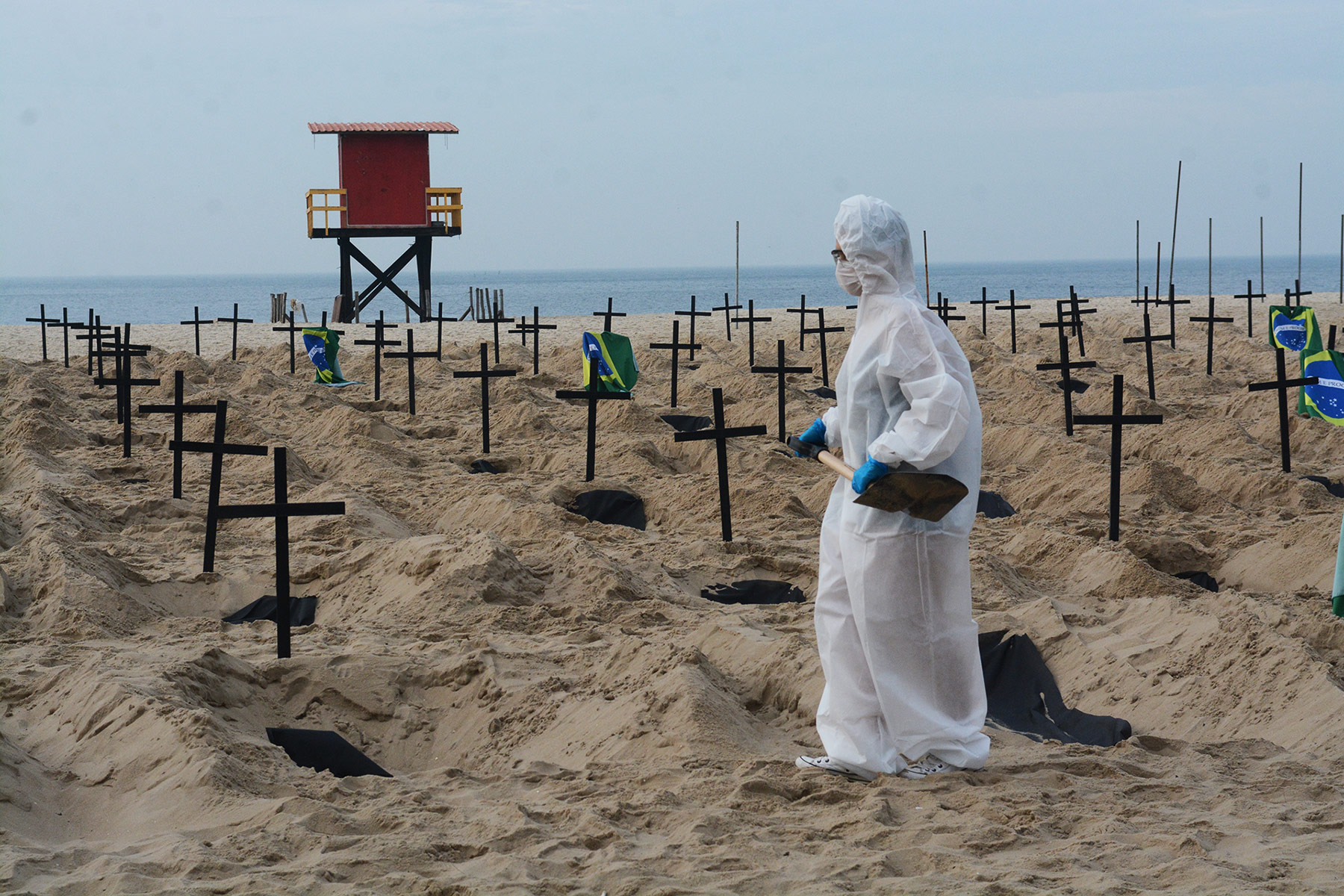 On October 26, Brazil’s senate approved the final report of its investigation into President Jair Bolsonaro’s handling of the COVID-19 pandemic, exposing malign policies and widespread corruption. The main conclusion of the six-month-long probe conducted by the COVID-19 Parliamentary Inquiry Commission (CPI) is clear: The actions and failures of the Bolsonaro administration contributed to more than 600,000 COVID-19-related deaths across Brazil to date, the second-highest total in the world behind the United States. On average, 1 out of 347 Brazilians has died from the coronavirus.

The commission heard more than 100 witnesses during 66 sessions and examined some 20 million gigabytes of digital information to trace the causes and consequences of Bolsonaro’s decisions, such as his lax COVID-19 policies derived from the disastrous attempt to let the virus run its course in order to reach herd immunity. Last year, Bolsonaro downplayed the coronavirus as “a little flu,” promoted the use of hydroxychloroquine and other unproven medications as a cure, opposed the use of masks and, most critically, failed to secure adequate stocks of the COVID-19 vaccine for the federal program.

The PCI was created in April, a month after the pandemic peaked at over 89,000 infections and almost 4,000 deaths a day. The commission’s final report is weighty, providing nearly 1,300 pages of robust evidence to indict Jair Bolsonaro on nine criminal charges, including crimes against public health and crimes against humanity. In addition to the president, 77 individuals, including three of his sons, two former and one current minister, as well as several close allies who are occupying key positions in public institutions, are on the indictment list.

The final report has been submitted to the general prosecutor’s office for further consideration. If Bolsonaro is formally charged, he might face between 21 and 79 years in prison.

The report will also be presented to the lower house of Brazil’s national congress. This could lead to an impeachment process for misconduct. Approval of the report by the lower house is unlikely, however, given it is controlled by Bolsonaro supporters. Formal criminal charges would have to be issued by Brazil’s attorney general, Augusto Aras, who is the president’s political appointee. The senators who led the commission have raised the possibility of taking the case to the International Criminal Court in The Hague in the likely scenario that the Brazilian justice system fails to prosecute Bolsonaro.

The turning point of the investigation was the uncovering of a corruption scheme inside the Ministry of Health to spend $300 million on 20 million doses of overpriced COVID-19 vaccines produced by the Indian company Bharat Biotech. The investigation revealed that the Ministry of Health reserved approximately $45 million to buy Covaxin, which has not undergone proper clinical trials and hasn’t been approved by any of the world’s health regulatory agencies.

The payment was to be deposited in an offshore account of an opaque Brazilian company, Precisa Medicamentos, which was brokering the deal and is facing several judicial probes into irregularities of public procurement contracts. A deputy in the lower house of congress and former minister of health who is a close political ally of Bolsonaro led the negotiations for the acquisition of the vaccine. Allegations from witness testimony indicate that the president was aware of the scheme. The attempt of the Bolsonaro administration to buy Covaxin is perplexing given that last year, it refused to buy the Pfizer vaccine even at a discounted rate.

The COVID-19 pandemic has exposed a lack of leadership across the country, turning a public health emergency into an economic and sociopolitical crisis. While there already were undisputed signs of a fast-approaching recession, with the rapid spread of the virus, the economic scenario deteriorated further. In 2020, Brazil’s economy was the second-most affected by the pandemic, after Spain. Last year, Brazil presented a negative GDP growth of 4.1%.

Economic projections for 2021 suggest that the Brazilian economy will show only a modest expansion considering last year’s economic debacle, with estimated GDP growth of 3.7%. This comes in a context of worsening macroeconomic indications such as increasing inflation rates, devaluation of the currency and rising interest rates.

The pandemic has also deepened political tensions in Brazil, with Bolsonaro more isolated than ever. The pandemic made crystal clear the president’s ineptitude to lead, coordinate and articulate meaningful solutions to the crisis. It brought to the fore Bolsonaro’s belligerent personality and put him at odds with close aides. Since the beginning of the pandemic, Brazil had rotated four ministers of health, two of whom have left the government due to sharp disagreements with the administration’s policies.

Bolsonaro has also tried to shirk federal public health responsibilities to state and local authorities. This has intensified the political conflict with state governors, which has greatly contributed to the disarticulation of coordinated pandemic response. Despite Bolsonaro’s obstructionist policies, state governments carried out their own vaccination programs. The state of São Paulo began a large-scale vaccination drive after an agreement was signed with the Chinese company Sinovac Biotech to locally produce the Coronavac vaccine. As of last week, the state had a vaccination rate of 87% for those over the age of 18, compared to 53% for the rest of the country.

Initially, Bolsonaro interpreted the pandemic as an opportunity to advance his narrow political interests, such as his controversial agenda of easing arms control, relaxing implementation of environmental legislation and combating anti-corruption laws and actions. Furthermore, the president used the pandemic as an opportunity to distribute financial assistance to the poor, a move that allowed him to enjoy high popular approval ratings during several months of the pandemic, from February to October 2020.

The indictment will have far-reaching consequences for Bolsonaro’s ambitions in next year’s presidential election. Based on an opinion poll from October, if the election were held today, former President Luis Inacio Lula da Silva would win with 56% against Bolsonaro’s 31% in the second round.

Lula, who is on the opposite side of the political spectrum from Bolsonaro, was imprisoned in 2018 on corruption charges, until the supreme court annulled his conviction in April this year. Thus, despite current projections that give Lula a clear lead, Brazil’s 2022 presidential election will be a highly polarized affair with unpredictable results.

Perhaps unsurprisingly, since the launch of the senate inquiry, Bolsonaro’s popularity has dropped significantly. Between January and October this year, the number of those who describe Bolsonaro’s governance as “bad” increased from 40% to 53%, while “good” or “excellent” ratings have fallen from 32% to just 22%, the lowest point since he took office in 2019. This is bad news for Bolsonaro, who will lose his presidential immunity from prosecution if he fails to win reelection.

In response, on October 20 — the same day the results of the investigation were first made public — the president announced that he would increase financial support to a major social assistance program, the “Bolsa Família,” designed to alleviate poverty. This populist welfare policy, which was announced for the sole purpose of bolstering the president’s reelection prospects, had a negative effect on the Brazilian financial markets.

The government’s overspending is creating a record deficit, with the International Monetary Fund projecting public debt to reach 96% of the country’s GDP. Under this fiscal deterioration, investors are concerned about Brazil’s capacity to further control its debt, leading to a sharp devaluation of the currency; since January 2020, the real lost almost 40% of its value.

Jair Bolsonaro thought the COVID-19 pandemic would help disguise his incompetence. Instead, the crisis has shown how lack of leadership kills — at a shocking scale. The more than 607,000 Brazilian lives lost during the pandemic serve as a constant and grim reminder there is no place in Brazil for weak leadership.

While bringing those protected by immunity to justice will be an uphill struggle, the parliamentary inquiry has demonstrated that Brazil has strong democratic institutions that can not only effectively resist the autocratic push by the executive but also hold the president accountable for fomenting what may be the worst public health crisis in Brazil’s history.