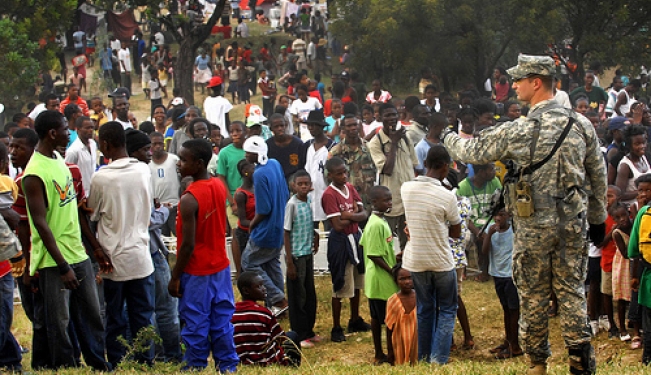 A commentary on the multiple challenges of Haiti’s reconstruction.

“I couldn’t find the words to say to those people" – Haiti’s President René Préval a few months after the devastating earthquake in Haiti, which killed an approximate 230,000 people.

Not until months after the earthquake did former President René Préval speak out to the Haitian public. At no time did he rally them for a united effort to reconstruct their country. Today, Préval’s words are still painfully reflective of the disconnected relationship between Haiti’s ruling elite and the general public. “We are left to ourselves”, as Creole teacher Gustave Emannuel describes it. The nihilism extends towards the political class, the reconstruction of his country, and even towards his own people. “I only see widespread egoism. Nine out of ten Haitians simply think about their own interests. Our only role models are corrupt politicians who call going into politics a business career. Many of us hoped that things would change with the election of Michel Martelly, but things are just like before–never-ending political power games between the governing elite. Right now, we don’t even have a government. Martelly’s second proposition for Prime Minister was again defeated by the Senate.” Political leadership and coordination of the reconstruction effort has been widely absent. A holistic plan to rebuild Haiti was never drawn up. Nobody ever thought about including the Haitian population in the reconstruction effort, since no incentives were given. The United Nations (UN) and numerous international organizations (IO) and non-governmental organizations (NGO) have unofficially taken over the administration of the small Caribbean nation. They are trying to involve the Haitians in the reconstruction, but not always successfully. The British Red Cross (BRC), for example, is focusing on large shelter projects for internally displaced persons. Such projects are essential to get the remaining 680,000 people out of the camps and into temporary shelters, where they have greater security from natural hazards as well as better sanitary facilities. A representative from the BRC explains why it is not an easy task: “We are dealing with multiple challenges, such as very congested areas and disputes over land ownership because of the loss of legal documents.

However, besides such structural problems, I have gotten the feeling that many Haitians are not genuinely interested in reconstructing their country. In our projects we have seen a lot of corruption and nepotism. For example, some of our national middle managers have subcontracted projects to their family and friends, who then charged exorbitant prices for their services and never delivered outputs. They even went as far as to fiddle with employment and time sheets. They seemingly had people work for us who don’t even exist, pocketing the money themselves. It is very disappointing. Moreover, the semi-skilled Haitian workforce really does show motivation and dedication but unfortunately has neither a good education nor enough professional experience to take over the middle managers’ tasks.”

Most other Haitians, who didn’t have the chance to be employed by international organizations, are trying to get day-by-day. Jobs are rare, the education system is mostly private and very costly, and rent prices have skyrocketed since the earthquake. The informal sector is blossoming on every street corner of Port-au-Prince. People try to sell anything that could earn them some money, from fruits and vegetables or other food items to beauty products or clothes. It is an improvised survival strategy. Directly after the earthquake a lot of cash-for-work projects were implemented. This allowed Haitians to attain a few dollars for a day’s work of removing rubble, for example. Today such projects are rare.

The promised economic recovery, which was predicted from all sides, is lagging behind. Investments continue to be low, and most of the funding pledged at the donor conference in March 2010 has not yet arrived. “The Interim Haiti Recovery Commission did not even manage to put up indicators to evaluate project proposals until the beginning of 2011. We are understaffed and Haitians don’t even know what we are doing,” complains a Swiss-Turkish staff member of the IHRC. Such complaints are not uncommon. Frustration is widespread, whether on the part of Haitians or international aid workers.

Another tension exists between Haitians and the UN stabilization mission for Haiti, MINUSTAH, which is supposed to bring security to the country. Haitians call them “TOURISTA” because “all they do is drive around town and point their guns at us. Moreover, it was they who brought the cholera to Haiti” declares a Haitian lady, who tries to make business by selling avocadoes to passers-by. Trust amongst Haitians is entirely absent, whether it be towards the state, towards organizations, or towards each other. This pervasive bitterness, as well the absence of functioning state institutions, never-ending humanitarian disasters (including hurricanes and the cholera epidemic)a lack of coordination and mismanagement of aid by IOs and NGOs, and an apparent apathy by Haitians caused by the seemingly insurmountable task of reconstructing their country has led to only infinitesimal progress in the reconstruction process. “But in fact this is nothing new,” says Wilner Dorlus, the coordinator of a European Commission project on child protection. “Haiti’s problems are complex and the ones we see today have already been there for decades. What we need is not to lose hope and keep on going, every day, day-by-day.”