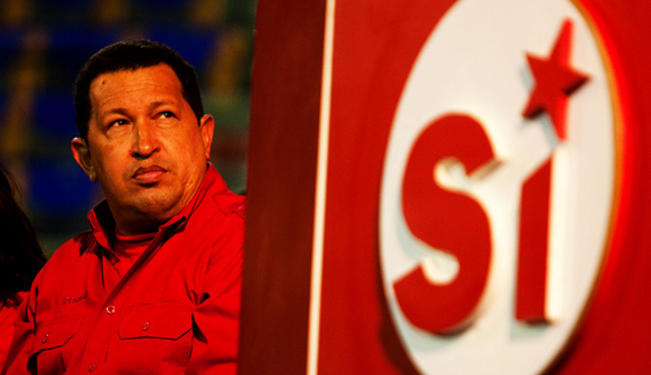 Though Chavez has helped many Venezuelans out of poverty, the implications of his prolonged rule bear frightening consequences.  By the end of his next term, he will have governed the Bolivarian Republic of Venezuela for two decades and an entire generation will have risen from birth to maturity under his watch.  Without a comparable opposition or socialist alternative, Chavismo will define the political memory for a whole segment of society.   In this way, Chavez has cultivated an era, a time in which he represents the only political figure capable of determining the country’s future.

The Making of an Era

Chavez’s Movement of the Fifth Republic, ended an era of democratic power sharing among parties dominated by the country’s business elite.  His resounding presidential victory in 1998 crippled the traditional party system that had existed since 1958.  In the following year, a popular referendum ushered in a new constitution to replace the previous one that had established the fourth republic.  Over the next thirteen years, a series of direct voting reserendums amended the constitution to remove term limits and expand the power of the executive.

Chavez’s approach was radical and produced immediate results.  Those with little, who had watched for fifty years as oil profits brought them nothing more than a toxic Lake Maracaibo, now had access to healthcare, subsidized food, literacy programs and government housing.   More than half of the Venezuelan population receives some form of assistance from the government.

The result has reduced poverty from a near majority of the population in 1999, to below 30% today and cut extreme poverty from a quarter to just 5%.  According to the Economist,this percent reduction was the highest among any other Latin American country over the same period.

But, Chavez has cemented progress with himself.   While every other Latin American country saw changes in leadership during a decade and a half of falling poverty, Chavez deepened his influence.   Even in Brazil, where an immensely popular President Luiz Inacio “Lula” da Silva received a lot of credit for poverty reduction, he refused to allow his party to alter the constitution to eliminate term limits and he worked hard to groom a successor who won by a narrow margin in 2010.

In no other country in Latin America has drastic poverty reduction attributed such power to the leader.  Even other left-wing populist leaders in Bolivia and Ecuador have encountered significant opposition to their agendas from within their own coalitions.  Moreover, in countries like Chile, Peru and Colombia we find a disconnect between improving economic conditions and approval for the executive.  Turnover elections brought a pivot to the left in Peru and a shift to the right in Chile, despite economic progress made by the incumbent parties.

To a certain degree, Chavez embodies a modern form of the 19th century Latin American “Caudillo,” a rural leader who raised armies from the peasantry to seize the central government from pro-free market liberals.  The Caudillo was the powerful ‘man on horseback,’ cultivating a strong sense of personal authority and ruling the country as if it were his own estate.

Though often viewed as tyrants, some scholars argue that the caudillos practiced a form of democracy that was in fact more inclusive than the liberal republics that they deposed.  Bradford E. Burns argued in his influential Poverty of Progress thesis that caudillos represented the desires of the vast majority of the people better than any elected president.   Though they governed with an iron fist, they were simply projecting the will of the rural majority in a forceful manner.

Burns defines this phenomenon as “inorganic democracy,” a form of direct representation carried out through an authoritarian figure.  Though mostly wealthy landowners, the caudillos were the only members of the elite with any direct contact with the common people.  The caudillo never won in the ballot box, but rather in the hearts of the people whose interests he championed.  By becoming the indispensable master of the state, the caudillo personified the will of the masses.

In debating Chavez today, opponents and supporters tend to inexplicitly incorporate the idea of “inorganic democracy” into their arguments. The follow excerpts exemplify this tendency.  Jonathan Glennie for the Guardian states that the:

"[T]he accumulation of power in the executive and the erosion of human rights protections have allowed the Chávez government to intimidate, censor and prosecute critics and perceived opponents in a wide range of cases involving the judiciary, the media and civil society."

But in a separate articleby Gregory Wilpert of Venezuela Analysis:

"Venezuela has made significant progress in the past 12 years of Chavez’s presidency towards creating a more egalitarian, inclusive, and participatory society."

If both statements are true, then how can a society be more inclusive and less democratic at the same time?   The answer is inorganic democracy: the idea that the supreme executive strengthens its control to protect the interests of the electorate.

Chavez has fostered greater citizen participation in government through local councils and other bodies that help decentralize the decision making process.  At the same time, he has stripped the legislature of most of its power, systematically censored private broadcast media and packed the military and judiciary with loyalists. Chavez has empowered the less fortune on a local level, but dismantled any significant opposition to his agenda from the central government.

To be clear, the environment in which Chavez rose to power has changed significantly since the 19th century following Latin American independence.  Chavez emerged in a democratic system and has sought extensions to his power through legal avenues.  Though he has used his authority to tighten his grasp on power and the media, he allows free and fair elections with the participation of significant opposition.

Chavez is a caudillo in reverse.  The 19th century caudillo gained power through military force and then consolidated his control through civilian institutions, his personality and some form of pseudo democratic legitimacy.   Conversely, Chavez first built a legitimate democratic movement with his personal charisma and support from civilian organizations and then tightened control over the military and the executive decision making process.  The 19th century caudillo used the sword to conquer the people, while Chavez used the people to conquer the sword.

Chavez’s messianic status among his supporters, his fight against unrestrained foreign influence and his ability to enact laws by presidential decree without approval from congress, resemble aspects of Caudillismo.  Though Chavez is not a dictator, his imagery and actions carry a patrimonial tinge.

His rise as an opponent of a democratic system dominated by a free market oriented elite, paralleled the rise of many caudillos.  The peasants who supported the caudillos, contested a liberal elite that sought to privatize their communally held property for sale to foreign companies.  Similarly, the Chavistas who voted Chavez into office were reacting to neo-liberal or free market reforms that caused a surge in joblessness, raised the cost of living and slashed government services.  Both Chavez and the caudillos were the product of public reaction to similarly oriented policies and their rule brought an end to the existing system.

The Dangers of a Chavez Era

The thing about caudillos is that they die in shame with few institutions to their name.  Their intense personalism polarizes society and prevents the continuation of their movement after death. They are irreplaceable and leave behind a power vacuum filled only by upheaval.

With few notable exceptions, after a caudillo died, his opponents took over, reversed his policies and rewrote history to show an era of tyranny.  Portraits of the great leader were ripped from the walls and a new era would begin.  Any progress made during their often decades of rule could be reversed in a matter of a few years. The most famous caudillo, Juan Manuel Rosas of Argentina, became nothing more than a hated memory in the republic that succeeded him.  The rustic gaucho class that formed his armies and received his protection, found themselves to be the scapegoat of the new government, which sought to replace the rural cow herder with European immigrants.  Rosas and his allies were so polarizing that they came to represent the dichotomy between civilization and barbarism.  Spanish, Irish, German and Italian immigrants were brought in to ‘civilize’ the nation from the perceived primitive gaucho culture.

Chavez’s irreplaceability in his movement is strikingly similar to the caudillo supremacy.  No one, not even within his Socialist Party of Venezuela (PSUV) presents a remotely comparable alternative to his leadership.  He has not allowed enough room for his top officials to pursue their own politics and none has exhibited his passion and charisma.

Chavez, who spent the last two years battling cancer, will not live forever and when he is gone there will be nobody capable of replacing him.  If he dies in office, the Venezuelan constitution requires a presidential election be held within 30 days. Because he has failed to groom a successor, the power vacuum in his absence will most likely favor the newly energized opposition.  His polarization of Venezuelan society between those opposed and in support of his socialist revolution, may lead to a backlash against his policies and many of his social missions may be gutted for the sake of austerity and retribution.  The result may reverse decades of effort towards social progress.

These are the dangers of a Chavez era.  The Bolivarian Revolution, as he calls his movement, can only be sustained by Chavez’s own personality.  Without Chavez it the lacks same ideological authenticity.  He has groomed a generation to associate his presidency with the state.  A post-Chavez Venezuela will have to establish a new political memory, perhaps through changes to the same extent enacted by Chavez when he ended the era of oligarchic power sharing that came before him.