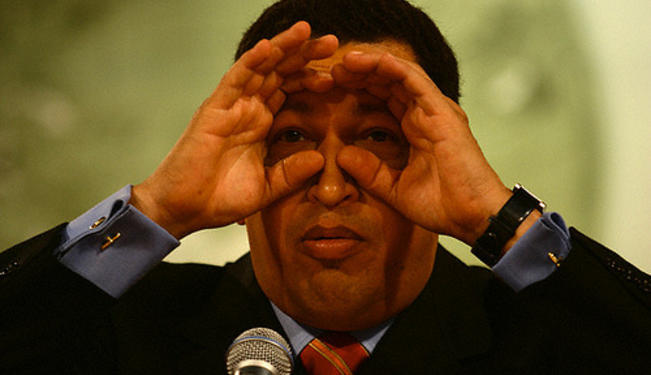 Chavez has become a prominent world figure for his socialist project and defiant global mission. Both blessing and curse, his significance is without question.

Hugo Chavez is a polarizing, yet indispensible figure in Latin America.  He has empowered the less fortunate, providing free health care and access to resources for those once ignored by Venezuela’s political oligarchy.

Meanwhile, Chavez has mismanaged Venezuela’s monetary system, created vast shortages in basic goods, and hacked away at the private sector. In the international arena, he has gained a reputation as one of world’s top demagogues.

After winning a fourth term in the October 7th elections, Chavez is poised to continue his anti-imperialist socialist project.

Why is Hugo Chavez Relevant?

Despite his socialist rhetoric, Chavez straddles the region’s political spectrum, engaging with centre-left leaders in Brazil and Argentina – recently becoming a full member of Mercosur – and thawing relations with neighboring Colombia’s centre-right government.

On the left, Chavez is part of a group of Latin America leaders who contest the effectiveness of the free market system.  He founded the Bolivarian Alternative for the Americas (ALBA), a solidarity-based economic arrangement that unites other left-leaning Latin American statesmen.  The agreement works through a barter and aid system, in which resources are traded for services and human capital.  Venezuela’s vast oil wealth has helped fund the majority of these reciprocal exchange programs.

Internationally, Chavez has taken controversial foreign policy positions, supporting leaders shunned by most states in the Americas.  He is involved in a number of economic agreements with Iran, was a steadfast supporter of Libya’s Qaddafi and has repeatedly provided the Syrian dictatorship with shipments of diesel fuel.  Similarly, Russia’s Vladimir Putin is a close Chavez ally.

Chavez rose to the presidency in 1998.  Despite a 48-hour military coup in 2002, he has governed Venezuela for 14 years and he envisions another twenty.  In 1999, he won a popular referendum allowing him redraft the 1961 constitution.  Many of the new document’s 350 articles allowed for the structural changes necessary to implement his socialist project. In 2009, he succeeded in changing the 1999 constitution to end presidential term limits.  After losing a supermajority in the 2010 congressional elections, Chavez’s coalition gave him the power to rule by decree before the opposition legislature could be inaugurated.

Following the attempted coup in 2002, Chavez purged the military, packing it with his supporters. Top military officials had expressed their willingness to take extraordinary measures if their leader had been defeated in fall elections.