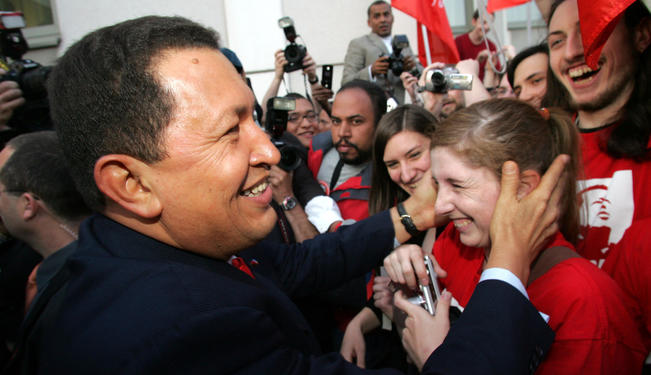 Speculation has been mounting in Venezuela following the death of Hugo Chavez over the late leader's successor and the country's regional leadership.

On March 5, after a long battle with cancer, the death of Hugo Chavez Frias was announced. The late Venezuelan leader led the country since early 1999 and established a regional leadership status among the new left that emerged in Latin America (Ecuador, Bolivia, Brazil, Nicaragua, Peru, Argentina and Uruguay). A dedicated follower of Bolivar's anti-imperialism ideals, Chavez was a known adversary of the United States especially for the Bush administration.

His death not only affects Latin America but also countries worldwide, including Syria, Iran, Russia and China. These close ties to such controversial regimes perhaps explain the silence of governments like Israel who had accused Chavez of supporting Hamas and Hezbollah, and who through their spokesman, Igal Palmor, announced that they had nothing to say about his death.

Unlike Israel, Obama stated that the interest of the United States was on creating a constructive relationship with Venezuela, and support for democracy in the country.

Within Venezuela, there appears to be a consensus in the fact that the constitution must be respected, and therefore new elections will have to be held since Chavez was unable to be sworn into his second term in office. Vice-President Maduro has temporarily been elected to lead the country in a very controversial measure. This initiative was supported by the President of the National Assembly, Diosdado Cabello, and in final instance by the Supreme Tribunal, against the opposition demands of a new election and transparency over Chavez's health.

Officially, the National Assembly has 30 days to organize new elections. However, the main leader of the opposition and governor of the state of Miranda, has not declared his intention to run against Maduro, who was selected as the successor of the Oficialismo by Chavez himself. The big question which arises today in Venezuela is whether the not so charismatic Maduro will be able to obtain the same 55% majority which backed Chavez in the October 2012 election.

The key issue in Venezuela is now unity. Unity will be crucial to avoid unnecessary clashes among the population and any potential violence, which would be detrimental for the country. Both sides have tried to reassure their militants that the constitution will be respected. For the moment, however, Maduro will continue to stay in command until the vote, fulfilling the decision of the Supreme Tribunal.

Early elections could become a win-win situation for the ruling party because on the one hand, the legacy and memory of Chavez is still fresh in the public's mind —  which could play in favor of Maduro. On the other hand, it will show that the government is focused on democracy, while also defending the constitution.

The opposition has a significant challenge ahead of the polls in order to adopt the learned lessons of the recent elections, showing that a vote for the opposition is not a drastic reverse of public investment and assistance programs. They will face a very polarized Venezuelan society that has their Caudillo in their hearts and minds, but who also do not fully see themselves represented by a political figure such as Maduro, Elias Jaua, or Diosdado Cabello.

Impact on the Region

There is no mystery behind the fact that organizations such as the Bolivarian Alliance for the People of America (ALBA) and Petrocaribe, or that countries such as Bolivia, Ecuador, Cuba and Nicaragua have a high level of dependence on Venezuelan income and cooperation. The importance of Chavez in the creation of the UNASUR as a regional initiative for South America, cannot be denied.

Income from oil exports was clearly the main feature of Chavez's regional policy, as well as cooperation with countries who were aligned with Venezuela. The biggest effects will probably be felt by Cuba who receives 100,000 barrels of oil daily with soft payment measures; ones that include paying with doctors and other Cuban professionals who are sent to Venezuela as volunteers. By the end of the previous decade, Venezuelan-Cuban bilateral trade was higher than $6 billion, which at the time was the equivalent of 40% the foreign trade of Cuba. After the fall of the Soviet Union, Cuba went through a crisis that was alleviated by Chavez's arrival in 1999. Since then, the Castro brothers (both Fidel and Raúl) became strong allies of Chavez and supporters of the Bolivarian project.

However, there is another country whose peace process fate was tightly attached to Chavez: Colombia. Venezuela and Colombia have been rivals since 2002 when former President Uribe began to accuse Chavez of supporting the terrorist guerrilla of FARC. Bilateral relations between the two have had their ups and downs, but lately the Venezuelan government has played a key role in the discussions between FARC and the Colombian government.

Another key actor is Brazil. With Dilma Roussef having distanced herself from the Venezuelan radical leftist policies while she tried to seek a new center-left political, economical and social dynamic, she left behind the close ties of the Lula era which Brazil held with Venezuela. Can a less radical Maduro lead the renewal of a Brazil-Venezuela axis — that is the question. It is important to remember that such an axis was the lead opposition of the Free Trade Area of the Americas Agreement or FTAA.

The Legacy of Chavez

Many questions have been raised regarding the immediate effects of regional cooperation; mostly monetary issues such as the continuity of oil diplomacy or the problems caused by a possible devaluation of the Bolivar. However, with a leader such as Chavez, one has to pose the question of whether the Bolivarian legacy will have enough strength and continuity to prevail after the death of its main leader and even to create a solid political group out of it — as happened with Peron in Argentina.

Will the Chavismo become a Latin American ideological line of thought that can maintain unity with the different leftist governments in the region?  Will the main line of the Chavismo fail without Chavez?

These questions may not have an immediate answer and only time will tell. However, one thing is certain: despite his critics, Chavez created a revolution and redefinition of Latin American socialism. He managed to increase public investment and wealth fare for the lowest social classes. He made Venezuela a key regional player and also established alliances with neighboring countries.

Whether friend or foe, Chavez was an icon of the 21st century and a leader who Venezuela will never forget.