Despite popular thinking, the view from Moscow is of a Russia in decline.

The lowest point in the fortunes of Russia since the Mongol invasion had been the Treaty of Brest-Litovsk, which was forced on the Russians by the Germans on March 3, 1918.

Today, it is worse. Russia is back behind those German borders and has lost much, much more. It is still losing.

By early 1918, the Russian state had collapsed with the fall of the Romanovs. Vladimir Lenin—whom the kaiser had sent back to Russia in a sealed train from his exile in Switzerland to foment the revolution—wanted to stop the war at any cost in order to consolidate the Bolshevik grip on power.

The German terms were draconian and pushed the borders of Russia hundreds of miles eastward. In the west, Russia had to give up the Baltic states, Ukraine, Belarus, parts of Poland and, in a separate agreement, most of the Caucasus to the Ottoman Empire

The Brest-Litovsk border changes were reversed when the Germans were defeated in the west and by the supervening Treaty of Versailles—lucky for Russia. Skip forward to the end of the Second World War and Russia had expanded its borders to include the Baltic states, the eastern part of Poland and extended its influence and control over all the states of eastern Europe and half of Germany. Joseph Stalin could claim not only to have restored the glories of imperial Russia, but to have expanded the empire enormously. That was the high point.

The current state of Russia is a disaster by comparison. Its western borders have once again been pushed back to the Brest-Litovsk line—it has lost the western Russian Empire of the czars and all of Stalin’s gains, except the enclave of Kaliningrad and the more recently recaptured Crimea. Russia is reliving the humiliation of 1918.

But the popular view is that Russia is resurgent, aggressive and expansionist. Plenty of evidence exists to support this: the seizure of Crimea and South Ossetia, the bombing campaign in Syria, the saber rattling in the Baltics and an increasing military budget. However, the bigger picture is that Russia is at a very low point in its history and struggling to recover. The tide of history is flowing in the other direction and the low oil price and its derelict, out-of-date economy are further drags—not to mention rampant corruption and political stagnation.

One might say that President Vladimir Putin has done well to keep it all together and still remain personally popular. But the view from his Kremlin window is bleak. But wait, it gets even worse. In the south, Russia has lost again a big portion of the territory it ceded to the Ottoman Empire. These are now the states of Armenia, Azerbaijan and Georgia. It has also lost Kazakhstan and all the other central Asian states. Things are grim in the west and in southern Asia too. But at least the vastness of the Russian steppes and Siberia are safe. Or are they? The nightmare is that they are not.

A recurrent fear in Moscow is that the Chinese will eventually reassert control over the Russian Far East. This starts with the area sometimes referred to as Outer Manchuria—twice the size of Texas—and now the part of Russia around Vladivostok. The Chinese were forced to cede this area to Russia in 1858 and 1860 (by the Treaties of Aigun and Peking) during the so-called century of humiliation. These are the only territories China surrendered at that time which it has not yet recovered. Although China has recognized the border in the most recent version of the Russian Chinese Friendship Treaty of 2001, generations of Chinese have been taught to regard these lands as “lost territories.”

The entire population of the whole of the Russian Far East is less than 7 million (compared to China’s 1.3 billion) and demographic pressure is pushing more and more Chinese across the border—legally and illegally—in search of work, trade, farmland and space.

Chinese migration into Russia is a highly sensitive issue and there are no recent or reliable figures—though migration is surely underway. Some estimates already put the number of ethnic Chinese in the region above 1.5 million and possibly much higher. Russian and Chinese officials keep very quiet about this. Nothing has been said in public since 2008 when Putin himself told the inhabitants of the border city of Blagoveshchensk that if the tide does not turn, their children will speak Chinese.

Russia is trying to increase the number of Russian speakers in the region by resettling refugees from the conflict in Ukraine and offering free land to anyone who wants to resettle—similar to the homesteading that populated the American West. This initiative is having some effect, but the Russian-speaking population is still falling. As things stand, in a few years the new Chinese immigrants will demand Chinese-speaking schools and public services. It will then be only a short step to demanding autonomy.

Russia is losing its grip. China is playing this very well indeed: befriending Russia, buying its oil and gas, encouraging trade and investment—the warm embrace of the tiger anticipating its next meal.

So, the view from the Kremlin is of a Russia in decline: a moribund economy, forced behind humiliating borders likely to shrink further and handicapped by sanctions.

The situation is not dissimilar to that of Germany after World War I. Then, Germany saw itself humiliated, surrounded by enemies with an economy in sharp decline and hobbled by reparations. Germany, too, had a strong desire to recover what it had lost and more. National socialism seemed to be the answer and one of its first moves was to start rearming.

Putin may be tempted to follow a similar path. 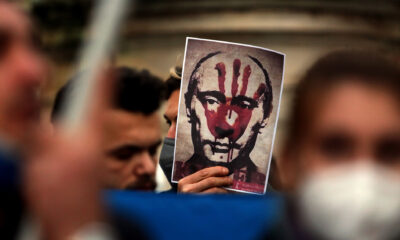