Julian Assange is a refugee under international law and should be given the right of passage by the British government, says John Pilger.

Julian Assange, the founder and editor of WikiLeaks, has now been a refugee in the Ecuador Embassy in London for three years.

The key issue in his extraordinary incarceration is justice. He has been charged with no crime. The first Swedish prosecutor dismissed the misconduct allegations regarding two women in Stockholm in 2010. The second Swedish prosecutor’s actions were and are demonstrably political. Until recently, she refused to come to London to interview Assange. Finally, when the British government almost pleaded with her to come, she agreed. She has now cancelled her trip.

The entire episode is a farce, but one with grim consequences for Assange, should he dare step outside the Ecuador Embassy. The US criminal investigation against him and WikiLeaks—for the “crime” of exercising a right enshrined in the US constitution, to tell unpalatable truths—is “unprecedented in scale and nature,” according to US documents. For this, Assange faces much of a lifetime in the hellhole of a US supermax prison if he leaves the protection of Ecuador in London.

The Swedish allegations are no more than a sideshow to this—the SMS messages between the women involved, read by lawyers, alone would exonerate him. They refer to the accusations as “made up” by the police. In the police report, one of the women says she was “railroaded” by Swedish police. What a disgrace this is for Sweden’s justice system.

Julian Assange is a refugee under international law, and he should be given the right of passage by the British government out of the United Kingdom to Ecuador. The nonsense about him “jumping bail” is just that—nonsense. If his extradition case went through the British courts today, the European Arrest Warrant would be thrown out and he would be a free man.

So what is the British government trying to prove by its absurd police cordon around an embassy whose refuge Assange has no intention of giving up? Why don’t they let him go? Why is a man charged with no crime having to spend three years in one room, without light, in the heart of London?

The Assange case amplifies many truths, and one is the accelerating, global totalitarianism of Washington, regardless of who is elected president.

I am often asked if I think Assange has been “forgotten.” It is my experience that countless ordinary people all over the world, especially in Australia, his homeland, understand perfectly well the injustice being meted out to Julian Assange. They credit him and WikiLeaks with having performed an epic public service by informing millions about what the powerful plan for them behind their backs, the lies governments and their vested interests tell, the violence they initiate. Power that is corrupt loathes this, because it is true democracy in action. 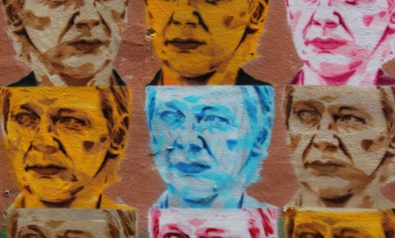