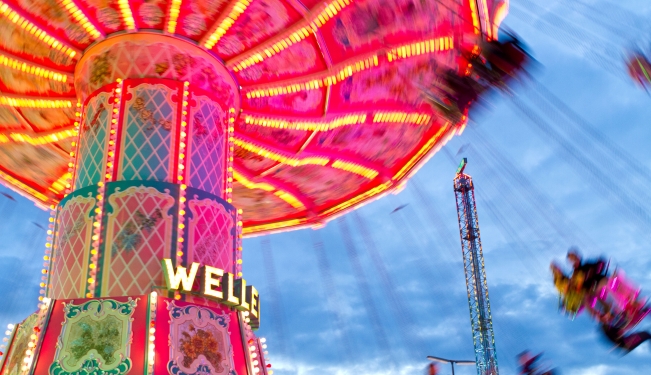 Commentary on the preparation which goes into the successful hosting of the Oktoberfest in Germany every year.

More than 6 million people visit the Oktoberfest every year to experience one of the most unique festivals that Germany has to offer. To ensure visitors are satisfied with their experience, a workforce of around 12,000 people is employed on and off-stage.

For the security of millions of people, hundreds of police workers make sure that everything goes according to plan. Stephan Hördler works at the Oktoberfest on a voluntary basis, just as everyone else in the line of duty. He describes his days at the Oktoberfest as very special because it adds some variety to the usual patrol duties and gives him the opportunity to meet many interesting people. Although he has already worked nine times at the Oktoberfest, not much has changed for him. Due to the threat of terrorism, more safety zones were set up. “And as hard as it is, as much fun does it bring around”, he says. “There is really nothing as unique as working here”.

While at the Oktoberfest, a must-do for visitors is to enter one of the festival tents and have a traditional meal. Serving as a waiter is probably the most arduous job at the Oktoberfest. A typical day starts at 8 in the morning and ends at midnight – a sixteen-hour shift. One person has to be able to carry around 10 steins (traditional beer mugs) on average at once, which is equivalent to over 20 kilos of beer. Nevertheless, Harry Maas, a waiter in one of the 35 tents, finds joy in serving people. “I have always loved working at the Oktoberfest. I work as a waiter full-time, so I love to serve people and especially the atmosphere here is exceptional. You meet all different kinds of people, which is the most enjoyable (part) about it.” However, Mr. Maas is quick to address the myth evolving around his income. Rumors that waiters at the festival earn more than 10,000 Euros at the Oktoberfest are patently false. “One would never be able to earn that much”, he says. The money earned would at best suffice for two months, but there is no chance that workers are able to live on account of their earnings from the Oktoberfest alone. As Mr. Maas points out, it is not the money that he works for but the special experience. For him, there is nothing better than his current job and the anticipation of working another five years at the Oktoberfest.

In front of the Hofbräu tent, the biggest tent on the site, stand four small booths. One of the workers in these booths is Klaur Baur, a native of Munich, who has been selling pretzels for 19 years. He, too, points out the variety of people that he gets to meet during the two weeks as one of the best aspects of the festival. It fosters understanding and bridges gaps between different nations, as people from all over the world are able to sit at one table and celebrate together. Klaus remarks that “International cohesion is so important, especially in these days, and the Oktoberfest helps to bring people together.” However, even though he regards the coming together of persons from everywhere as a positive factor, it also affects the residents of Munich. “Friends of mine, the natives of Munich, those who truly represent Bavarian culture, don’t even go to the Oktoberfest anymore because it is so crowded. It is unfortunate that the tents have to close so early.” When asked what is so special to him about the Oktoberfest, he immediately cites the grand parade of the breweries as well as the traditional costume parade taking place the day after the tapping. “Due to its traditional significance, it is very important and moving for me. It gave me (the) chills the first time I saw it and will give me (the) chills the last time I’ll see it”.

Organizers and workers also strive to preserve the traditional features of the Oktoberfest. During the last few years, young men and women have rediscovered Bavarian culture in the form of the traditional costume. The atmosphere and coziness of the ‘older’ times at the Oktoberfest are invigorated at the ‘Oide Wiesn”, which is an area adjoining the actual venue where historic rides and festival tents are presented. The difference between now and then is noticeable, according to Bianca Stark and Daniela Forster, two sweets sellers who have been working at the stand for 32 years with their mother Waltraud Röttgen. While earlier the Oktoberfest was more an event for the locals, nowadays it is a much more international affair. However, that does not mean they disapprove of this development. “Culture and tradition don’t get lost, because the mixture is the essence, you are able to experience so many foreign cultures; the flair is unique and can’t be found anywhere else,” says Röttgen.

While there is much joy, traces of sorrow and grief can be found amongst the people. Elisabeth Lindner operates a scooter amusement ride that has existed since 1881, and so is the owner of one of the oldest attractions on the Oktoberfest. Preparations can extend over an extremely long period and require a lot of effort, which many people quickly forget. Elisabeth holds each and everyone working at the Oktoberfest in high praise: “Every individual here who is responsible for making the Oktoberfest happen puts their heart and soul into this. Every booth is set up and decorated with very much love, care and attention to detail”. However, she also recalls sad moments amongst the happier ones. She clearly recalls the day of the bomb attack in 1980 during the celebration of Oktoberfest’s 100th business anniversary. As one of her saddest moments at the festival, she notes that this day will forever remain not only in her memory but also everyone else’s who was there that day. “The Oktoberfest is indeed a place of laughter and joy but we aren’t to forget the less happy moments here”.