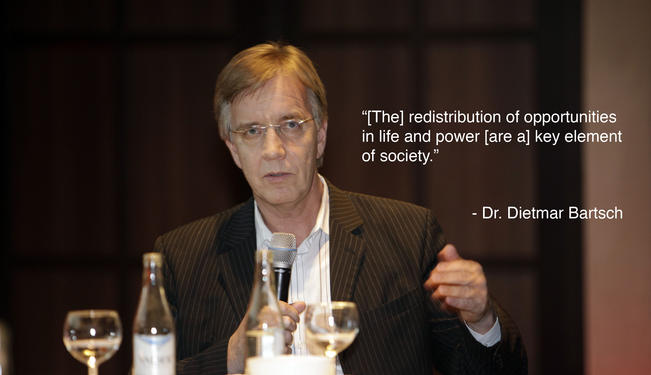 There are few industrialised nations in which the opportunities for upward mobility are as unevenly distributed as in Germany. A new academic expert report outlines the biggest obstacles to upward mobility in people's life trajectories. At the invitation of the Vodafone Stiftung Deutschland foundation and the stiftung neue verantwortung ("new responsibility foundation"), for the first time leading representatives of all parties have debated routes out of this unsatisfactory state of affairs. Hermann Gröhe of the centre-right CDU party calls for an "education system which fosters and demands high standards". Andrea Nahles of the centre-left SPD appeals for "free education from nursery through to university." Cem Özdemir of the German Greens argues that the childcare allowance and the educational package are "precisely the wrong responses."

Berlin, 24 January 2012. Compared with its European neighbours and North America, Germany is the country with the lowest levels of social mobility. Those born into a particular social "class" have little chance of making their way up to the class immediately above as they go through life. This is the finding of a recent expert report produced by Dr Reinhard Pollak of the Social Science Research Center Berlin (WZB) Berlin on behalf of the Vodafone Stiftung Deutschland foundation and presented in Berlin on Tuesday. In the post-war period in particular, a large number of people achieved upward mobility in society, which in West Germany was a result not only of the "economic miracle," but also of a society in which there was increasing equality of opportunity, according to Pollak. However, the report finds that there is considerably more downward mobility in today's Germany than there was in the past. At the same time, Pollak contends that it has become particularly difficult for those people living at the lower end of society to move upwards.

According to the researchers, the causes of this lack of opportunity are clear. However, the responses from politicians differ dramatically. This was apparent at a panel discussion hosted by the Vodafone Stiftung and stiftung neue verantwortung foundations, at which leading representatives of all parties were confronted with the findings of this new expert report.

Let's start with the causes. The social scientist's report identifies obstacles to upward mobility across all phases of life – in children's early years, during school, for young people, and also for adults.

Obstacle to upward mobility no. 1: educational and upbringing deficits in the parental home impede development in the early years

In the first few years of their lives, children develop attributes that are of crucial significance in their later development. These include linguistic and numerical abilities as well as social skills, motivation, and self-discipline. In Germany, parents are largely responsible for passing on all these skills and attributes. However, many parents nowadays are not sufficiently able to pass on these basic skills, which are becoming more and more important. Many children therefore have poor prospects from the outset.

Obstacle to upward mobility no. 2: moves from one type of school to another are blocked

During the first few years of school, the differences in the performance of children from low and high social backgrounds become ever greater. This is frequently a result of the lack of suitable childcare in the afternoons, a provision that could go at least some way to compensating for the disadvantages experienced by children from low social backgrounds. After primary school, many children from disadvantaged backgrounds do not attend grammar schools, even though their attainment at school or their cognitive skills would entitle them to do so. This is due to the lack of support from home and the educational decisions taken by parents, which differ according to social class. Teachers also allow themselves to be influenced by children's social backgrounds, especially when awarding grades and preparing recommendations regarding the appropriate type of secondary school. This creates a further obstacle to these children's prospects for upward mobility. As they progress through school, the attainment levels at the various types of secondary school diverge to such an extent that a subsequent move to a higher-level school is only possible in isolated cases.

Obstacle to upward mobility no. 3: youngsters' vocational opportunities are blocked

Young people who achieve very good school-leaving qualifications at around the age of 16 (broadly equivalent to GCSE level in the UK) and who complete a vocational training course or apprenticeship can, in theory, obtain further qualifications by taking a university degree. In practice, however, this option is not widely used, due to a lack of both prior knowledge from school and targeted support. Those with school-leaving qualifications fromHauptschulen, the least academic of the largely tripartite German school system, together with school-leavers who do not have any qualifications, are prematurely labelled as being unsuitable for further education and training and therefore have little chance of obtaining an apprenticeship.

Obstacle to upward mobility no. 4: career paths barred for adults

Specific qualifications are often absolutely essential to obtain entry to a particular profession or a specific wage group. But the major significance of qualifications rather than actual performance at work frequently represents an obstacle to the career opportunities of many people in Germany. This has an especially profound effect because it is very difficult to obtain qualifications at a later date in the country. The clear framework and adequate funding required are lacking. Furthermore, the childcare facilities that could take the pressure off parents while they obtain additional qualifications are inadequate in many parts of Germany.

This challenging situation is not denied by any of the political parties in Germany, but opinions regarding the political conclusions to be drawn differ markedly. At the panel discussion organised by the Vodafone Stiftung and stiftung neue verantwortung foundations, high-ranking representatives of all parties spoke about the challenges.

Hermann Gröhe, general secretary of the centre-right CDU party, called for "an education system which fosters and demands high standards." Gröhe went on to argue that this was why "we are expanding early years education by offering all-day nurseries and schools, especially in deprived areas. At the same time, we want an education system that differentiates between pupils, but also allows movement between the various tiers."

Green party leaderCem Özdemir strongly criticised this standpoint: "The planned childcare allowance and a bureaucratic educational package are precisely the wrong responses. Instead, the funds should be put straight into the quantitative and qualitative expansion of nursery provision and all-day schools, in which young people from disadvantaged backgrounds in particular can receive the support they need in a socially and culturally stimulating environment."

The general secretary designate of the liberal FDP party, Patrick Döring, echoed the remarks of his CDU coalition colleague in stressing the importance of jobs. "Good, strong growth," commented Döring, created "the best opportunities for work and upward mobility."

However, Andrea Nahles, general secretary of the centre-left SPD party, sees a pronounced need for action to be taken in the economy and employment. Speaking in advance of the debate, she again called for greater "regulation of the labour market with a boost to permanent, full-time, and secure employment while reducing the number of people on temporary, part-time, and insecure contracts." Before the debate took place, she also demanded "greater equality of opportunity in the education system via special support and free education from nursery through to university."

The deputy head of the parliamentary grouping of the left-wing party Die Linke, Dr Dietmar Bartsch, stressed that the low level of equal opportunities in Germany was "a product of politics." He therefore argued in favour of a "redistribution of opportunities in life and power" as a "key element of society."

Almost all party representatives agreed that education for the disadvantaged merited targeted support to boost social mobility opportunities in Germany.

Vodafone Stiftung Deutschland and stiftung neue verantwortung are working together on a think-tank project to enhance the prospects for upward mobility in German society.

The expert report prepared by Dr Reinhard Pollak of the Social Science Research Center Berlin (WZB) on behalf of Vodafone Stiftung Deutschland, as well as the related printable graphics and high-resolution photos from the event, are available as free downloads on the internet at www.vodafone-stiftung.de.