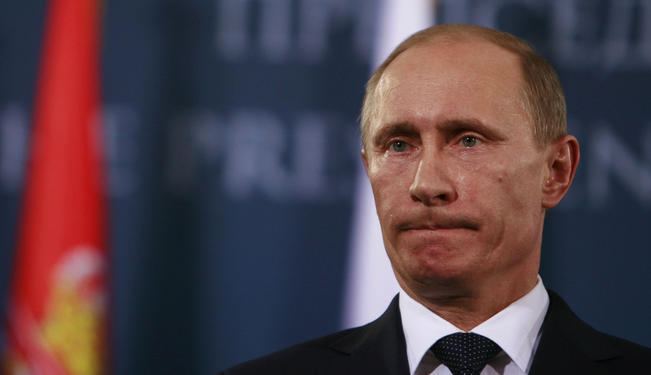 Is building a national ideology a viable solution for Putin to consolidate power?

Today, it is widely acknowledged in Russian society that a unifying national idea is virtually non-existent. Even two decades after the collapse of the Soviet Union, Russia continues to be characterized as "post-communist," a term that connotes an absence of content rather than a presence thereof. This view is so pervasive that even Russia’s most well-publicized patriot, President Vladimir Putin, speaks frankly about the difficulty that Russia and Russians face in answering questions about "who [they] are and who [they] want to be."

But Putin also wants to answer these questions for Russia. In his commencement speech at this September’s annual gathering of Western journalists and Russian officials at Lake Valdai, Putin stressed the need for a singular national idea. He rejected any alternatives of Soviet ideology, imperial conservatism and "extreme, Western-style liberalism." Instead, he expressed nebulous but confident notions about rooting identity in homegrown historical tradition, but failed to quite reach the ideological heights of the Soviet "Workers of the world, unite!" or the imperial "God is with us!"

Live Not by Lies

Notwithstanding Putin’s optimism, Russian citizens seem uninterested. Aleksandr Solzhenitsyn, in a famous essay published in The Washington Post and written in Moscow six days before he was forcibly exiled by the KGB in 1974, clearly articulated his refusal to abide by artificial and hollow ideology in the maxim, "Live Not by Lies."

This slogan is perhaps one of Russian society’s few enduring belief systems. Numerous studies today have registered the mistrust and suspicion with which most Russians regard their government. The Levada Center concluded in 2011 that 85% of Russians polled believed that government officials did not observe the law, while 65% thought that the majority of officials are in politics for personal gain. Only 14% of Russians thought they could influence the political process, and 65% stated that they have never attended any political gatherings in Russia and under no circumstances would do so.

Apathy is omnipresent. It is a mentality, found in many post-communist states, conditioned by decades of blatant incongruity of Soviet ideology and practices and further reinforced by the chaos of Boris Yeltsin’s "democratic" tenure. It is a behavior embodied in the miserable abstraction known as Homo Sovieticus, a mockery of everything the Soviet Union tried to achieve with its idealized "New Soviet Man."

However, Putin has enjoyed tremendous popularity in the last decade despite distrust and a dearth of political activism. Perhaps the most important reason for his popularity is that his greatest successes have been tangible accomplishments.

Putin’s initial popularity stemmed from pragmatically, albeit brutally, restoring order to the breakaway republic of Chechnya. Riding on a wave of economic growth that he also received credit for, Putin demonstrated his competence as an administrator over the next several years by purging politically active oligarchs, while promoting the campaign as an apolitical offensive on corruption.

This is not to dismiss the whole host of new problems Putin’s "accomplishments" have spawned. Chechnya’s fragile peace today is maintained by Ramzan Kadyrov – a de-facto warlord – through brute force. Russia is critically dependent on energy exports to maintain economic momentum. Meanwhile, although oligarchs no longer subvert the law so openly, there is virtually no evidence that issues of endemic corruption have been seriously addressed. Still, Putin can claim an impressive résumé that overshadows these finer points. None of his accomplishments were intrinsically ideological. They were demonstrable achievements that any leader would have been proud of.

So why does Putin now feel the sudden need to discuss ideology? He may be worried that his popularity is slipping – but it probably isn’t. The Russian president may be diverting attention away from the fact that economic growth is slower than it was before the 2008 global financial crisis. Perhaps maintaining stability is not quite as impressive as imposing it in the first place. Perhaps Putin honestly worries that, as he said at Valdai, "it is impossible to move forward without spiritual, cultural and national self-determination."

Although seemingly lacking explicit guidelines, Putin’s behavior has hardly been fickle or unpredictable. In foreign policy, Russia has regularly pursued confrontational policies against the US and the West. International observers have cited everything from Russia’s rapidly reaccelerating military expenditures to Putin’s active role in "resolving" the Syrian crisis as evidence of this antagonism. Although an early participant in the War on Terror, the Russian president has been critical of the US’ role in the Middle East for the past decade. In his recent New York Times editorial, Putin claimed that as a result of the American wars, "millions around the world increasingly see America not as a model of democracy but as relying solely on brute force."

This trend extends beyond foreign policy alone. Even certain elements of ostensibly Western culture have been targeted. For instance, Halloween celebrations, regarded as being a part of Western, particularly American, culture, were suppressed in October 2013 in some public schools as part of an effort to stop "extremist sentiments among children and young people," and to preserve the "basic cultural values of the people of Russia." State media, meanwhile, has repeatedly suggested that the gay rights movement in Russia is a foreign phenomenon, sponsored by Western organizations and nefarious figures like George Soros.

In recent years, Putin has taken an active role in not merely opposing the West, but also in establishing alternative Russian values and institutions. He was a prominent facilitator of the reunification of the Russian Orthodox Church with its main branch outside of Russia. Putin has repeatedly emphasized Russian Orthodoxy as a critical point of historical identity for Russians. Putin’s dream of a customs union of former Soviet Republics, the very same that instigated the Kiev protests currently threatening to topple Ukrainian President Yanukovych, is no doubt a challenge to the European Union (EU). Moreover, the scarcity of actual economic benefits in this customs union indicates that the union is more of a political entity rather than economic.

These examples suggest that the Russian government’s opposition to the West stretches deeper than practical political positioning. Wary of the consequences of relying too heavily on military might, Putin may want to build a national idea that could offer a viable alternative to the EU – perhaps even American hegemony – and provide a rhetorical supplement to his regional aims. Indeed, Russia has a long history of global, messianic national ideas like spreading the orthodox word of God or the Leninist word of Marx. Putin’s national idea is not merely an idea for Russians then, but a pitch to the rest of the world, particularly its historical "sphere of influence," legitimizing its position as a regional and world leader.

Russia’s recent "goodwill" offer of a staggering $15 billion to Ukraine in the middle of protests threatening to distance Kiev from Moscow speaks clearly to Putin’s geopolitical ambitions. Yet these recent developments in Ukraine have shown that, for Russia, economic incentives are far from sufficient in attracting even the most culturally connected neighbors. This is something that Putin appears to have recognized some time ago. If Russia is to extend its influence over the many former Soviet Republics, whether in the form of customs unions or other political agreements, it must do so by supplementing an appealing alternative vision that speaks to the people. And the further the values in this vision are from Western values, the more leeway Russia has in positioning itself as a leading alternative to the prevailing order. In the case of Ukraine, at least, Putin does not appear to have made a convincing case yet.

Regardless of what his motivations may be, Putin’s lofty national idea project may pose an even greater danger at home. Lev Gudkov, a noted Russian sociologist, has argued against the oversimplification of Russian society as a nihilistic ideological vacuum, waiting to receive inspiration. Gudkov makes a nuanced distinction in asserting that rather than passively rebuffing moral or political stances, Russian society actively, even aggressively, devalues activists and dismisses them as "out of touch" or impractical. Russians do not merely avoid going to a political rally — they belittle the thought of doing so. This is a critical difference. It is cynicism, not nihilism.

However, when with time these accomplishments become less impressive, building an ideology that widens the gap between reality and rhetoric becomes precisely the most direct route to earning the displeasure of the cynics. At this point, it appears that Putin’s quest for a national idea is not just futile, but also a danger to his own power.