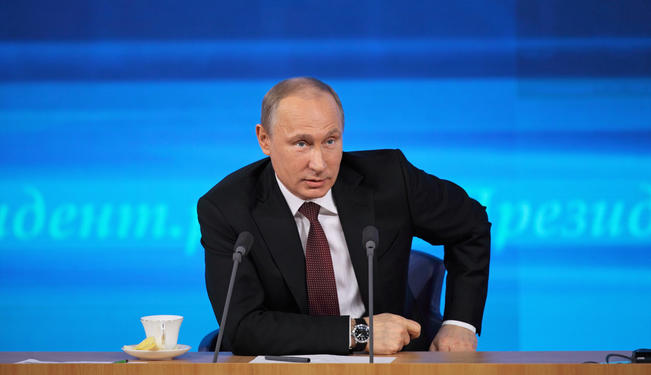 The Crimean referendum highlights the differences in strategy between the West and Russia.

As Crimea's referendum on March 16 dawns, tensions in Simferopol begin to escalate. Russian troops, whose presence has become increasingly intimidating over the past week, have made attempts to seize Ukrainian bases and have overtaken a Ukrainian military hospital by force.

Despite condemnations and threats of economic sanctions being thrown around by Western leaders, Russian President Vladimir Putin is still holding strong with no sign of avail. While it is certainly true that Russia has been demonstrating serious militaryaggression by invading Ukraine's sovereign territory, a better-rounded approach should be employed to examine the latest Russia vs. West standoff.

Since the onset of the crisis, both Western and Russian media have been coming up with varying theories regarding the turn of events and the future of Ukraine. While talk of a return to the Cold War is a rather overblown reaction, the propaganda being thrown around left, right and center has certainly created a sense of Cold War déjà vu for many.

German Chancellor Angela Merkel has publically accused Putin of losing his senses; the US has consistently threatened to enforce economic sanctions; and interim Ukrainian Prime Minister Arseniy Yatsenyuk has asserted that Ukraine "will never surrender" to Russia. But all these empty words have translated into little action and Putin continues to play the game by rules of his own making.

The Russian president can certainly be called lot of things, but a madman he is not. Putin is well-aware that while the US can threaten trade sanctions all it likes, European countries will remain more hesitant to appear aggressive in the face of their Russian neighbor. Sanctions would certainly send a damning message to the Kremlin and inflict a serious blow to Russia's economy, but Europe would experience its own boomerang repercussions.

A secret Downing Street report revealed that British Prime Minister David Cameron, who gave a strong-worded speech threatening Moscow with diplomatic, political and economic consequences, had absolutely no intention of realizing these threats. Leaders from European Union (EU) member states are aware that addressing the Ukrainian problem with hostile actions toward Russia will do more damage than good and spiral the situation further out of control.

The Hypocrisy of the West

Leaders of the US and EU member states would have been wise to brush up on their history before entering the murky territory that is Crimea. If they had done so, they would know this territory has been bouncing back and forth between Russian, Turkish and Ukrainian jurisdiction for centuries. The region has a complicated history but has always had close ties to Russia. While it is true the current crisis is an issue deserving international attention, the West's reaction has been mired with hypocrisy.

Let us leave aside most of the accusations proffered by the West for a moment and examine the situation from the other side. In 2013, peaceful protests erupted after then-Ukrainian President Viktor Yanukovych failed to sign the association agreement with the EU. When demonstrations turned sour and clashes between protestors and police forces began to escalate, Yanukovych negotiated a deal with the opposition, caving in to their demands and offering swift elections.

However, in a move that has more the semblance of a coup d’état than the result of a democratic revolution, extremist opposition factions continued the fighting, seizing government buildings even after Yanukovych signed the deal. With the parliament forced into a corner, MPs voted for his removal, leaving the democratically elected president with no choice other than to flee.

Some of these radical nationalists managed to grab onto the reins of power and became part, according to the Western narrative, of a legitimate coalition government.

The next day, in a move that provoked outcry from Russian populations, the Ukrainian Parliament passed a bill that stripped the Russian language of its official status in Ukraine. The bill was quickly repealed but the damage was already done, as the move was enough to provoke fear in Russian speakers in eastern Ukraine and Crimea.

The fact that some of these radical nationalists now sit in the government was recently confirmed by the leaked telephone call between EU Foreign Policy Chief Catherine Ashton and Estonian Foreign Minister Urmas Paet. He confessed to Ashton that snipers behind the killings of protestors at Maidan were most likely linked to elements of the current coalition government, and not Yanukovych supporters. "Gosh!" was the seemingly surprised response of Ashton, but she agreed that no investigation of these incidents would be desired.

The message here is simple: When it comes to exposing Russian acts of aggression, everyone is on board; but when similar atrocities are uncovered concerning the other side, these issues are better left in the dark.

The ousting of Yanukovych and his subsequent replacement with opposition leaders, some from radical factions, was not considered a coup because the forces were pro-West and the move was widely welcomed by the US and EU.

But let us not forget, Yanukovych was no dictator. He was, however ineffective and corrupt, a democratically elected president who received the 48.9% of the vote in the 2010 elections, dubbed by international observers as free and fair.

In light of this, it seems reasonable that Russia refuses to recognize the interim Ukrainian government as legitimate, considering that nobody voted these individuals into power. In similar fashion, one cannot overlook the inconsistency shown by some democratic leaders between the treatment of Yanukovych, a wealthy, corrupt and pro-Russian leader, and Yulia Tymoshenko, a wealthy and corrupt pro-Westernleader. While the former was forced into exile, the latter's release from prison was hailed as a victory for democracy.

While the US and EU have been huffing and puffing as usual, Putin decided to go all in with his aces rather than engaging in a rhetorical chess game like the one played by Western governments.

Whatever the West claims, however, Putin's end game was never war. Among his own population, he is largely seen as standing up against what Russia believes was an illegal coup and the ousting of a democratically elected president. Accusations that Putin has gone mad simply do not hold. Within Russia, his popularity rating is up seven points from January and currently stands at 72%. According to a Levada poll, the majority of Russians agree that Ukraine has been taken over by extreme nationalists, while 65% believe that Moscow had the right to step in and defend the Russian population in Crimea and eastern Ukraine.

This appears to be consistent with Russian citizens' strong desire for security and stability after two decades of post-Soviet chaos. Echoing the thoughts of the famous Italian spin-doctor, Niccolò Machiavelli, Russian people believe their leader should be feared rather than liked. Putin is certainly doing a fine job at that.

US President Barack Obama has extensively argued that the secession of Crimea and its annexation by Russia would be an act in violation of international law. Moreover, it is not a fundamental right and unilateral secession is unlawful, even if supported by the local population. The move would be contrary to the Ukrainian Constitution, which requires the whole of Ukraine to vote for a secession.

Putin has strategically calculated his next moves and possesses the support of the Russian and Crimean population. But this is not to say that Russian actions are not plagues with hypocrisy themselves. After all, while the Kremlin has compared the situation to that of Kosovo, the two are evidently not one and the same, considering there are no clear signs of violent discrimination against the Russian population of Crimea.

However, that is not to say these extreme nationalists — such as the Svoboda party, which is adamant on breaking ties with Russia — will not strike in the future considering their strategic position within the current Ukrainian government.

On another level, Russia's support of Crimea has been inconsistent with its actions toward similar uprisings in Chechnya, Georgia and Azerbaijan, which it crushed ruthlessly.

The escalation of events in Crimea has resulted in a sticky situation for everyone and all powers remain on their toes in anticipation of the referendum's result and its subsequent aftermath. Nobody wants a war. The ousting of Yanukovych and the creation of a new government are by no means legitimate, but neither is holding a referendum during a Russian occupation of Crimea and with no option for the status quo.

Western leaders need to remember that Putin is not off his rocker and is merely engaging in a high stakes poker game. Both the US and EU need to think wisely about their next steps toward the ex-KGB agent to avoid destabilizing Ukraine any further. Putin has raised the stakes, and the West has no option but to go all in.