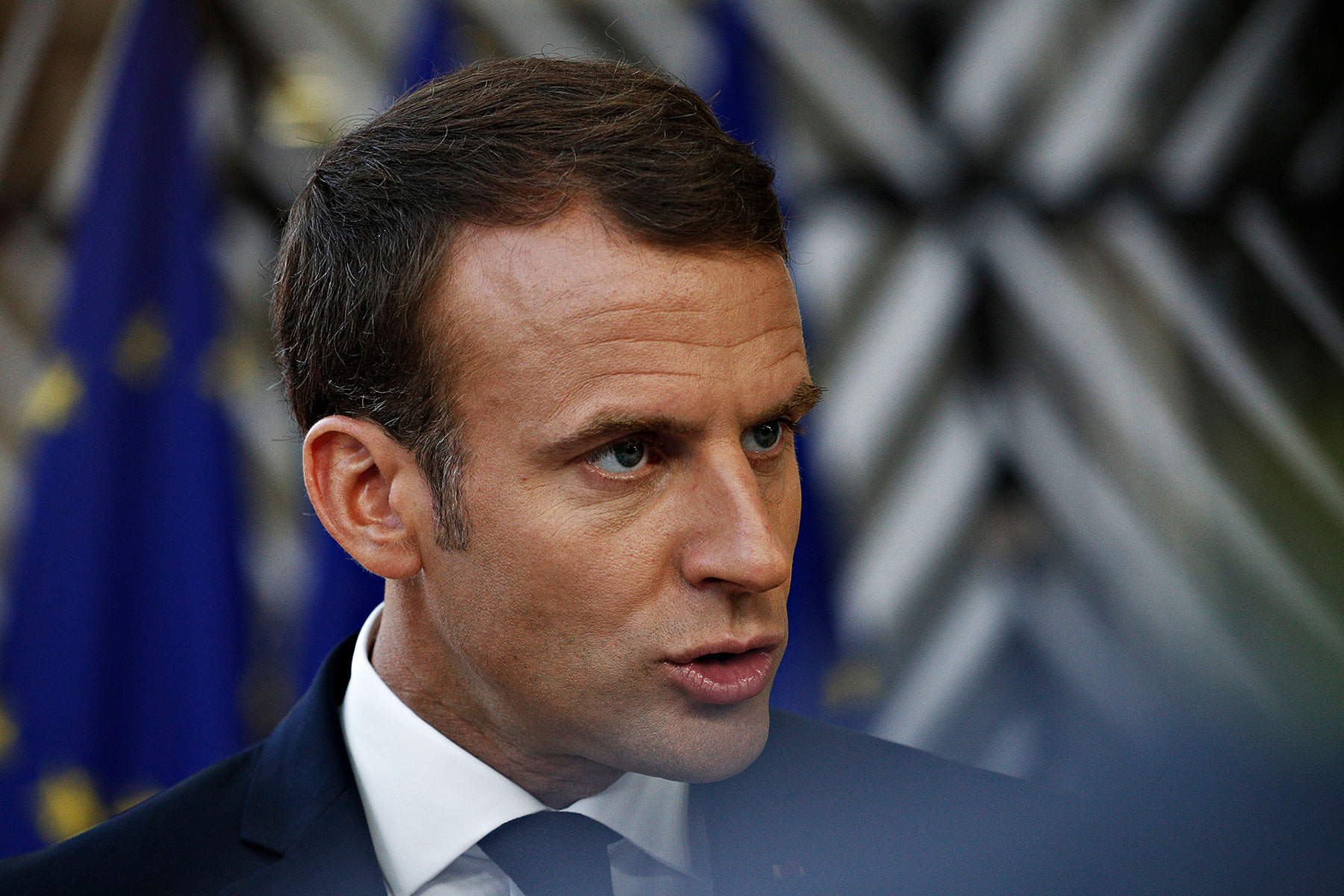 In a discussion concerning a new law that restricts the attribution of French visas to North Africans, French President Emmanuel Macron accused Algeria’s leadership of the crime of using the history of French oppression during the colonial period as an excuse for fomenting what he deems an attitude of permanent hatred against France.

Out of frustration with Algeria’s lack of cooperation in repatriating its citizens illegally residing in France, Macron’s government decided to reduce the number of authorized visas for Algeria and Morocco by 50% and Tunisia by 30%. To justify this move, Macron accused the Algerian government of mental games. As reported by Le Monde, “Macron considers that since its independence in 1962, Algeria has based its development on a ‘memorial rent’ fostered by its politico-military system.”

The only possible English equivalent of an untranslatable term invented by the French historian Benjamin Stora and hijacked by Emmanuel Macron, who believes that his 2017 election as president of the republic made him the nation’s and the world’s historian-in-chief

In July 2020, seeking to resolve the conundrum of tense French-Algerian relations, Emmanuel Macron commissioned historian Benjamin Stora to prepare a report on “the memories of colonization and the Algerian war.”

In January, Stora delivered his copy. Eschewing the interpretation of specific events and facts, which will always remain controversial and painful to consider, the historian chose to focus on the cultural and psychological effects left by the memory of those events on both sides of the Mediterranean. Those whose lives were affected by the long war of independence, according to Stora, have remained constrained within a permanent state of mutual misunderstanding.

Stora proposed the metaphor of “memorial rent” to characterize how the different groups have mobilized a set of recriminations concerning the injustice done to them in the past. They cite this as the psychological “rent” due to them by their adversaries.

On the French side, there are those who can be either nostalgic or ashamed of their colonial adventure and France’s self-proclaimed mission civilatrice. This includes officials and soldiers, but also the Harkis — Algerian Muslims who fought alongside the French army — and the pieds-noirs or the Europeans settled in Algeria but repatriated after the war.

On the Algerian side, there are those who identified with the struggle for independence as a political cause and a less politically motivated majority, who appreciated independence without actively embracing the cause. Many Algerians were alienated by the political and ideological infighting that the revolution fatally produced.

After long decades of official hostility between France and Algeria, people in both countries welcomed Macron’s declared intention to resolve the inherited problems and define a new relationship. The task could never be easy since France, even when excluded in the most absolute terms from Algeria’s internal politics, has always been lurking in the background. Numerous economic, linguistic and cultural links have maintained a necessary but distant relationship between the nations and their peoples.

Anyone who lives and works in the business world in France realizes that generations of North Africans have found their permanent place within French culture, even if their presence in the social structure is subjected to a curiously ambiguous dynamic. North Africans have simultaneously been encouraged (and accepted) and discouraged (and rejected) from being fully integrated into the French social fabric.

Stora insisted on the notion of memorial rent as a way of accounting for the mentalities that still inhabit the two populations and their governments. The Algerians cannot forget the reality of colonization. Having definitively renounced its colonial mission, France seeks to live up to its ideals of “liberté, égalité, fraternité,” in the name of modern Western liberalism.

Macron, the maverick, wished to distinguish himself from his predecessors by finding some common ground and opening a new horizon of cooperation. He hoped that by honestly acknowledging what was reprehensible in France’s past in Algeria, the two nations could begin a fraternal dialogue that had been shattered by the revolution.

Macron now feels his act of good faith has not been reciprocated. He nevertheless insists that he maintains excellent relations with the current Algerian president, Abdelmadjid Tebboune. Perhaps he sees a kinship to Donald Trump’s account of his relationship with Kim Jung-un. It contains the idea that a sentiment of personal friendship — even if totally imaginary in Trump’s case — accompanied by a willingness to dialogue on a person-to-person basis, could lead to long-term understanding.

Macron is not alone in noting that Algeria’s system of government appears seriously sclerotic. A majority of Algerians appear to share his analysis. Massive protests last year by the pro-democratic popular movement known as Hirak permitted the destitution of the doddering, despotic and now deceased President Abdelaziz Bouteflika. Last week, Macron dared to express his sentiment that Tebboune, for all his good intentions, was the prisoner of a system that he described as “very hard.” Though diplomatically delicate, it was a point worth making.

But after insisting that resolving the question of historical memory as described by Stora was the key to progress, Macron made a major mistake. Playing the amateur historian, he questioned whether Algeria had ever existed “as a nation” before French colonization, a period in which the region of Algeria was a precinct of the Ottoman Empire.

In other words, Macron implicitly called into question the historical legitimacy of Algeria as a nation-state. For Algerians, and other observers as well, that stands as a clear example of European political hubris.

To be fair, Macron cited a valid historical fact. But it implied a message not dissimilar to President Nicolas Sarkozy’s contention in a 2007 speech in Dakar that “the African has not fully entered into history.” In Sarkozy’s passably racist mind, Europe alone defined the drift and logic of history. At the time, Senegalese writer Boris Diop, remarked: “Maybe he does not realise to what extent we felt insulted.”

Many ordinary Algerians today feel the same way about Macron’s reflection on the status of Algeria. It clearly signifies that Macron thinks of Algeria as a second-class nation at best, lacking the dignity of European nation-states.

Le Monde’s editorial board believes that “Emmanuel Macron was right to make reconciliation between the painful experiences on both sides the axis of his ‘memorial policy.’” An outside observer might note that the idea a “memorial policy” would be unimaginable in most other cultures and historical contexts. The only significant precedents concerning national policies intended to produce an official account of the collective memory may be Israel’s remembrance of the Holocaust and South Africa’s truth and reconciliation commission.

But these three cases — Israel, South Africa and France — are all very different. In the Israeli case, there was no nation to reconcile with, Germany having been totally transformed after the war, followed by the subsequent creation of Israel. In South Africa, the formerly oppressed and their oppressors had to find a way of changing places by allowing a black majority to exercise its prerogatives.

Macron’s historicist approach, seeking to identify an entire people’s memorial content, may be seen, like so much else in French culture, as typically Cartesian. It transforms Descartes’ celebrated axiom, “I think, therefore I am” into “I remember, therefore I was.” This is as dangerous as it is potentially helpful because, while it seeks to reconcile, it creates false equations. Macron’s own discourse, when he invokes history to delegitimize Algeria as a nation, reveals the risk.

The president went even further when he accused Turkey of failing to recognize its own past as a colonial power. The mention of Turkey, whose president last year not only criticized Macron but called into question his “mental health,” would seem to indicate that for all his supposed Cartesian rationality, Macron can at times become unhinged, especially in the months before a presidential election.

Apparently aware of his mistake, Macron now is seeking to lower the tensions. But as political scientist Hasni Abidi observes, in the run-up to the election, Macron’s “mea culpa would be denounced by the parties of the right.” At the same time, Abidi believes the French may see Macron as a serial troublemaker adept at “creating multiple conflicts with Turkey, Mali, Australia or the US.” The election takes place in April.