Lack of readily-available palliative care in Russia is driving cancer patients to suicide.

In February 2014, the suicide of a distinguished navy commander rattled Russia’s social sphere. Former Rear Admiral Vyacheslav Apanasenko died in hospital after attempting to shoot himself, following a prolonged battle with cancer. “Do not blame anyone, but the Health Ministry and the government. I was prepared to suffer, but watching my loved ones struggle has proven too much,” his suicide note said.

His death wasn’t an exception: Just that March, at least another eight cancer patients took their lives.

Moscow’s Deputy Mayor for Social Issues Leonid Pechatnikov, however, did not seem too shaken. He blamed not the health services, but seasonal affective disorder (a standing joke excuse for all sorts of questionable behavior in Russia) for the increase in suicides, saying: “People don’t want to torture themselves, or their relatives. This is their version of euthanasia.”

In a better world, this situation would lead to a swift reconsideration of policy and reform, and a call for the deputy mayor’s resignation. But Pechatnikov is still in office, and in February 2015 alone, a further 11 cancer patients took their own lives, with at least four more following in May: a pensioner, a nuclear scientist and a psychology professor.

The problem behind this barbaric situation is manifold and lies in the way painkillers are currently prescribed to patients. Until recently, a three-step system was in place.

First, an oncologist needs to advise on the type of painkiller required. This seemingly easy step becomes a problem outside of the big cities, where the nearest specialist might be miles away.

Second, a local general practitioner writes the prescription, which then needs to be approved by a hospital administrator or head physician. There is no guarantee that these people necessarily work in the same hospital, and then the prescription is valid for five days only. Anyone who has ever had to face Russian bureaucracy, inherited from the days of the Soviet Union, where customer service was non-existent, can only imagine the trauma faced by relatives of patients whose unbearable pain remains in the hands of multiple officials.

The last stage of this compounding problem lies with pharmacies. A prescription is only valid for a specific pharmacy—strict anti-drug regulations make it difficult for pharmacies to stock morphine-based drugs. If the prescribed medication is not in stock, the prescription becomes invalid, and the whole process begins again.

Substitutions are not permitted either; for instance, two 75mg pain-relief plasters cannot be given out instead of a 150mg one. To make matters worse, it is also impossible to get new medication without returning the packaging from the previous dose.

The result of these practices is perhaps unsurprising. Speaking at a Forum of the Movement Against Cancer in 2014, Professor Elena Telnova of the Institute of General Health stated that only 4% of the necessary palliative drugs are being delivered to pharmacies across Russia; Moscow is at 10%. According to the head of palliative medicine at the Health Ministry, Diana Nevzorova, only 40% of cancer patients in Moscow receive adequate pain treatment. Across the country, only 8.8% receive necessary opiate-based pain relief.

The Russian Health Ministry clarified back in 2014 that any doctor has a right to prescribe painkillers, and they only need one more signature from the head doctor or the deputy. The ministry directives issued in July 2013 have apparently not been implemented, which the ministry blames on regional inertia. The federal health care watchdog found that only 3% of patients are receiving the drugs through the new, easier system in Moscow. In 40% of cases, morphine is still being approved by medical committees, not the prescribing physician.

Many doctors are afraid to prescribe morphine, fearing persecution by the Federal Drug Control Service (FSKN). The case of 73-year-old doctor Alevtina Khorinyak—who prescribed Tramadol to a patient with terminal cancer not formally in her care and was convicted by a Krasnoyarsk court of drug trafficking—caused public outrage. Both Khorinyak and a family friend who purchased the medication were also sentenced, but eventually they were acquitted on appeal. Such cases, however, force doctors to stay on the side of caution and, by default, inhumane cruelty. Given that overall legal drug sales comprise just a mere 0.7% of the 87 tons of confiscated illegal drugs, to say that FSKN officials’ efforts are misplaced seems far too kind.

In January 2015 alone, prices for life-supporting drugs increased by 3.4%, according to the Health Ministry. In 2014, the overall increase was at around 12.5%. There are around 287,000 terminally ill children in Russia, but there are currently no non-invasive palliative treatments for children due to “economic inefficiency.”

At the same time, cancer rates continue to grow. According to Russia’s chief oncologist, Dr. Valery Chissov, the number of cancer cases is rising by 1.5% a year, with about 500,000 new cases diagnosed annually. With around $30 spent on cancer treatment per person a year, Russia is at the bottom of the world’s tables, with basic chronic pain relief training for physicians, psychological support for patients and families, and specialized facilities such as hospices remaining largely non-existent.

Following Apanasenko’s suicide, the FSKN called for further easing on palliative care. A new law is due to take effect on July 1, 2015, which will increase validity of prescriptions to 15 days and officially remove the need to return old medical packaging.

Russia is an expansive country, with an even more formidable bureaucracy. The slow pace of any real reform regarding the right to a dignified death is indicative of not only failures at a ministerial level, but of the outdated perceptions among the public and physicians, who still view a cancer diagnosis as a sure death sentence, often unaware of treatment options and rights available to them.

In the midst of a major overhaul of the medical system across the country, which will cut jobs, funding and medical facilities in an already-malfunctioning system, it is difficult to see how new, even well-meaning directives can ever be effectively implemented. The proposal to prioritize drug manufacturers from the Eurasian Economic Union, if accepted, will add the variable of potentially poor quality drugs and limited choice to the current unbalanced equation.

In a 2014 interview, Nuta Federmesser, director of hospice aid group Hope, said that Rear Admiral Apanasenko’s death and Alevtina Khorinyak’s case are effective media talking points, but not enough to make the scale of the problem understood by the government.

Eighteen months and more than a dozen reported suicides later, how many people will have to take their lives until a critical mass is reached to begin work on a health care system that will actually benefit the people it purports to treat? 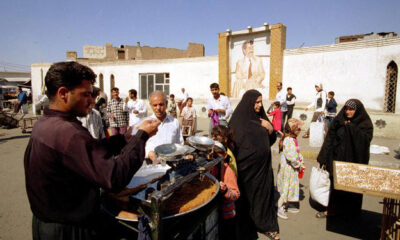 The Toxicity of Everyday Survival in Iraq (Part 2/2)

The Toxicity of Everyday Survival in Iraq (Part 1/2)