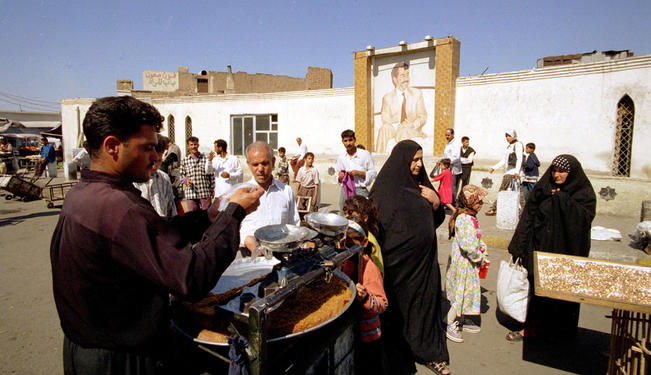 An American war experiment in Iraq has exported toxicity and disability across the world. This is the last of a two part series. Read part one here.

Over the past ten years, the Iraqi leadership and corrupt government institutions have been unable or unwilling to provide basic healthcare to citizens, especially for the rising numbers of cancer cases. In the south of Iraq, even poor families from the impoverished rural areas are left with no option but to seek care in neighboring Iran.

The collapse of medical care has also been mirrored in the breakdown of trust between doctors and patients; this is another essential reason that patients seek care abroad. Iraq’s health system is plagued by mis-diagnosis, mistreatment, and neglect. Patients accuse doctors in Iraq of being incompetent, greedy, and indifferent. One patient, commenting on the lack of trust in medical doctors, summed it up: “All the good doctors have left, and the ones who remain have lost their humanity.” While Iraq was once celebrated as one of the leading countries in the region for its medical capacities and infrastructure, the degeneration of Iraqi health care began under the effects of the 1991 war and 12 years of sanctions.

Thousands of Iraqi doctors and specialists have escaped the country to seek security and careers elsewhere. Since 2003, this exodus has increased due to ongoing violence that targets doctors directly. Hundreds, if not thousands, of doctors have been threatened, kidnapped for ransom, and/or assassinated. Some doctors have refused to perform surgical operations on patients for fear of retribution or demands for “blood money” from angry family members who might not accept unfavorable outcomes. The Iraqi Parliament recently passed a law allowing doctors to carry arms for their own protection.

The political and social malaise continues to be shaped by the failure of the political leadership to rebuild the country’s infrastructure. In Iraqi cities, people are forced to deal with paralyzing traffic congestion, security checkpoints, concrete walls, and the noisy hum and fumes of diesel generators that are used to compensate for war-caused electricity shortages. Poverty, disability, and unemployment are rampant. Sectarian violence in the form of car bombs, suicide bombers, and militia attacks hit streets, neighborhoods, markets, and religious sites, turning the urban space into a slaughter spectacle. Killers are elected to parliament, and religious and political leaders incite violence as they secure wealth, property and power. Corruption festers in this everyday toxic environment.

The injury and survival journey of Abu Ahmed, a 35-year-old man from Fallujah, illustrates this everyday toxicity. In July 2006, during the height of the sectarian violence, Abu Ahmed was shot in the face by an American paramilitary sniper who, he presumes, was a Blackwater contractor because of their presence in Fallujah at that time. The bullet pierced his windshield and ripped through his face. He was rushed by passers-by to the nearest hospital in Fallujah. There, doctors replaced lost blood and cleaned his wound. The bullet, which was extracted from his face, destroyed large parts of his left cheekbone, leaving a two-inch crater which makes it impossible for him to close his mouth fully. Abu Ahmed had to readapt slowly to the most basic daily functions of drinking and chewing food.

The hospital in Fallujah could do only so much. Abu Ahmed was told that he needed a more specialized hospital and surgeons capable of providing facial reconstructive surgery. At the time, he would not dare to venture to the capital because of the violence. Patients were being kidnapped from hospital beds and killed by a Sadrist militia group that had infiltrated the management of the Ministry of Health. His only alternative was to seek care outside the country.

Abu Ahmed’s extended family managed to raise some money by selling a small piece of land. With that and his own savings, Abu Ahmed decided to head to Amman to seek the opinion of a specialist. During that period, waves of Iraqis displaced by the sectarian violence were leaving the country for Jordan and Syria. Jordanian officials systematically denied entry to Iraqi Shi’a forcing them to settle temporarily in the more hospitable Syria.

Abu Ahmed, a Sunni from the province of Anbar, had been working as a driver between Amman and Fallujah for years. Indeed, he had been driving back from Jordan when he was shot. When he went to seek medical treatment, however, Jordanian customs officers denied him entry. Trying to explain the reason for his trip, he removed the yeshmagh (kuffiyah) wrapped around his face to show them his injury. After listening to his story, the customs officers were even more insistent on rejecting him. Surveying his wound, they expressed their suspicion about Abu Ahmed’s involvement with a “terrorist group.” From their point of view, what else could explain why US paramilitaries shot him in the first place!

When Abu Ahmed returned to Fallujah, he was advised to try Syria, where medical and surgical treatment was much cheaper than Jordan. After receiving his first reconstructive surgery in Syria, his family pressed him to make repeat trips for cancer tests because his injury is, both literally and figuratively, an open wound, and therefore, all the more vulnerable to toxicity. Abu Ahmed’s family, like many Fallujah residents, was concerned about the rising cancer rates following injuries from American ammunition.

According to Abu Ahmed, this kind of risk management practice has become common knowledge as people experience and deal with rising cancer rates, genetic mutations, birth defects, and disabilities. In 2003, his tribe was targeted in a full-scale US air strike that killed eleven people and injured dozens, including women and children. A number of those who were injured fell sick shortly thereafter and died from rapidly developing cancers or other unexplained conditions. The tribe was attacked by US forces on a number of other occasions as well.

In 2012, Abu Ahmed underwent surgery at AUBMC to reconstruct his facial injury with bone and skin grafts. While the surgery restored his functionality and some of the cosmetic aspects of his wound, he lives with the fear and prospect of developing cancer. For him and his extended family, war injuries and cancer are tightly knit phenomena in these webs of toxicity. His wound is not a mere metaphor of the precariousness of the social body; it is the interstitial materialization of war in his everyday survival.

Since 1991, Iraq has been one of the main sites for a US war experiment that has exported toxicity and disability across the world. Hundreds of known sites are contaminated with depleted uranium (DU) in Iraq. According to one report, the cleanup costs are estimated at $30 million. Recent medical and environmental research in Iraq have just begun to officially document links between the high rates of cancer and congenital birth defects in a number of Iraqi cities to exposure to DU and other toxic weapons. Still, with the ongoing US denial of the lethal and lingering toxicity of DU, and the current political disarray in Iraq, there is little hope that this issue will be addressed anytime soon.

Iraq’s toxicity and the resultant social scars run as deep as the molecular and genetic makeup of society and will afflict generations to come. Despite the end of the occupation in 2011, toxicity still shapes everyday survival in Iraq. The body of Abu Ahmed and millions of Iraqis continue to endure America’s poisonous gift of liberation. Their lives and wounds might be vulnerable to toxicity, but they are open, and shared. They seek everyday survival under conditions that stand as a testament to the horrors of empire’s toxic experiment.

In Russia, Cancer Patients Are Driven to Suicide

The Toxicity of Everyday Survival in Iraq (Part 1/2)