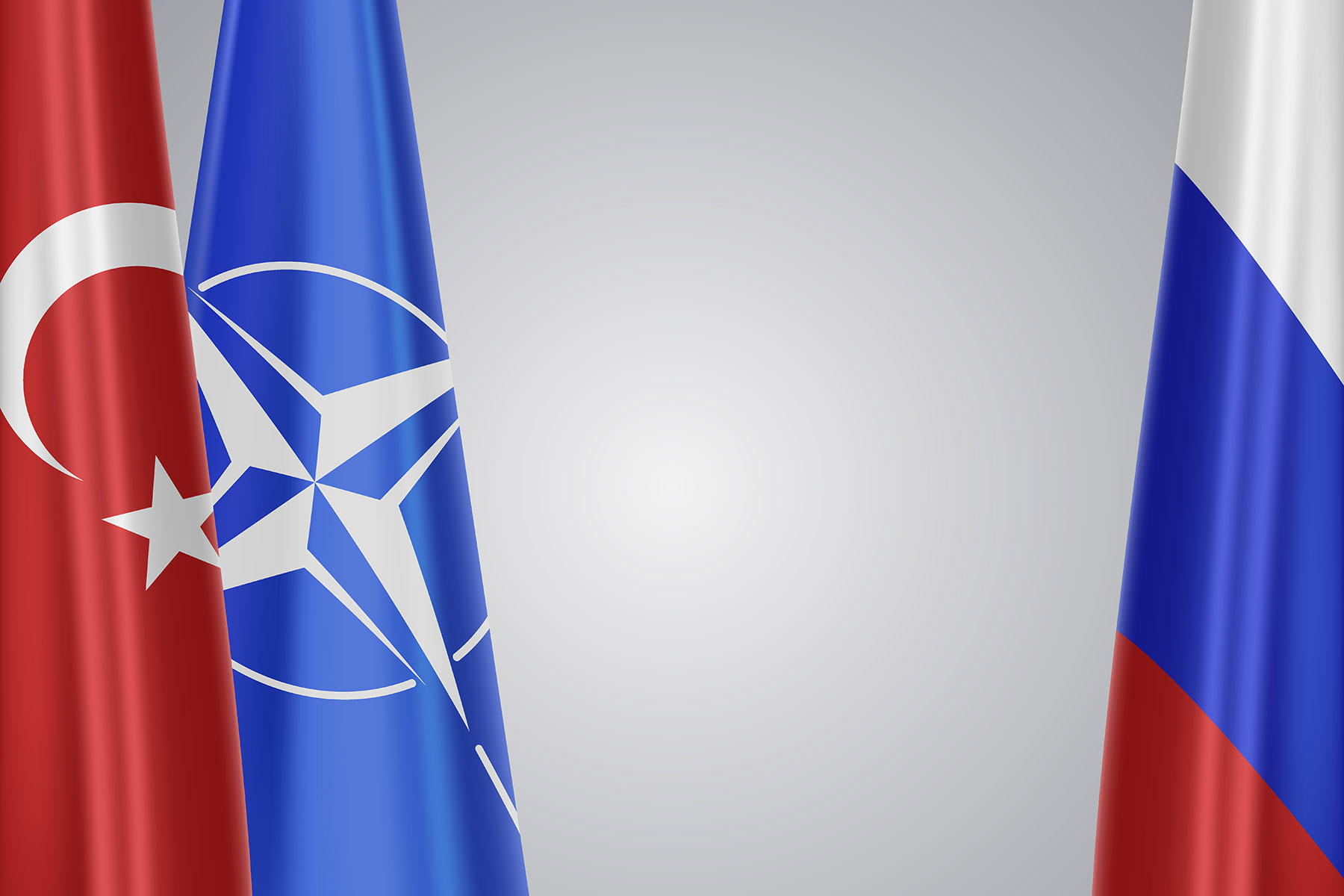 The flags of Turkey, NATO and Russia (left to right). © Iurii Vlasenko / Shutterstock

Just days before Russia’s invasion of Ukraine on February 24, the chief commentator of the Turkish daily Sabah, Mehmet Barlas, summed up his assessment of the situation with the sentence, “If we had to reckon with a war, President Erdogan would not have left today for a four-day trip to Africa.” He added that Recep Tayyip Erdogan, the Turkish president, is in constant contact with Russia’s Vladimir Putin.

Is Bosnia-Herzegovina Next on Russia’s Radar?

“All experts,” the avowed Erdogan supporter continued, agreed that Washington was escalating the crisis to solidify its dominance in Western Europe. With that, Barlas also echoed the general mood in Turkey. It is fortunate, he said, that Russia’s president is much more reasonable and wiser than his American counterpart, Joe Biden.

The Bond Between Erdogan and Putin

This positive image of Putin and Erdogan’s familiarity with the Kremlin leader is no accident. Particularly since the failed coup attempt in Turkey in 2016, Erdogan has, with Putin’s help, been able to position himself independently of — and sometimes even against — the United States and Europe on key foreign policy issues.

In Syria and Azerbaijan, Ankara and Moscow succeeded in marginalizing Western actors. In Libya and the eastern Mediterranean, Turkey acts as a competitor or even adversary to member states of the European Union.

Turkey’s flirtation with Moscow led to concerns that Ankara might turn away from Europe altogether. That contributed to the EU’s kid-glove approach to Turkey in the eastern Mediterranean and Cyprus. It also resulted in Washington’s belated reaction to Turkey’s acquisition of Russia’s S-400 missile defense system with sanctions. It is true that Turkey has experience with Putin as a cool strategist and ruthless power politician in conflicts such as the one in Syria. But Erdogan has always seemed to succeed in avoiding escalation.

Despite all of Ankara’s tension with Moscow, Erdogan’s rapprochement with Russia has brought him much closer to his goal of strategic autonomy for his country from the West. Turkey skillfully maneuvered between the fronts of global rivalry and was able to considerably expand its scope and influence in just a few years.

In this seesaw policy, however, Turkey is behaving much more confrontationally toward Western states than toward Russia. For years, the government press has painted a positive picture of Russia and a negative one of the United States and Europe. This is not without effect on Turkish public opinion. Around a month before Russia attacked Ukraine, in a poll carried out by a renowned opinion research institute, a narrow relative majority of 39% of respondents favored foreign policy cooperation with Russia and China instead of Europe and the United States.

In the first days after Russia’s invasion, Ankara’s policy followed exactly the aforementioned pattern. Turkey condemned the attack, but it is not participating in sanctions against Russia. In the vote on suspending Russia’s representation rights in the Council of Europe, Turkey was the only NATO state to abstain and, as such, is keeping its airspace open to Russian aircraft.

The West is paying particular attention to whether and how Turkey implements the Treaty of Montreux. The 1936 treaty regulates the passage of warships through Turkey’s Dardanelles and Bosporus Straits into the Black Sea. It limits the number, tonnage and duration of stay of ships from non-littoral states in the Black Sea. In the event of war, the convention stipulates that the waterways must be closed to ships of the parties to the conflict, and it entrusts Ankara with the application of the treaty’s regulations

It took Turkey four days to classify the Russian invasion as “war.” However, Ankara is still reluctant to officially close the waterways — as the treaty stipulates — to ships of parties to the conflict, Russia and Ukraine. Instead, Ankara is warning “all countries, Black Sea riparian or not,” against sending warships through the straits.

In the literal sense, this step is not directed unilaterally against Moscow, but it also makes it more difficult for NATO ships to sail into the Black Sea. According to the treaty, however, the waterways may only be closed to warships of all countries if Ankara considers itself directly threatened by war. Consciously creating ambiguity, Turkey has triangulated between the West and Russia.

Almost imperceptibly at first, however, a reversal has now set in. There are four reasons for this. First, the West is showing unity and resolve unseen since the Cold War, and its sanctions are undermining Russia’s standing in the world. Second, Putin is losing his charisma as a successful statesman and reliable partner. Third, Ankara realizes that Putin’s vision of a great Russian empire could provoke more wars. Fourth, the ranks of the adversaries are closing and it is becoming more difficult for Turkey to continue its seesaw policy.

Thus, strongly pro-Western tones have emerged from Ankara in recent weeks. Turkey will continue to support Ukraine in consultation with the West, according to the president’s spokesman. Foreign Minister Mevlut Cavusoglu now claims to have contradicted Russia’s wishes for the passage of warships through the Bosporus “in all friendship.” President Erdogan is also in favor of admitting Ukraine to the European Union and Kosovo to NATO.

Moreover, Ankara is not contradicting reports by Ukrainian diplomats that Turkey is supplying more armed drones and training pilots to fly drones. On March 2, Turkey joined the vast majority of states in the UN General Assembly’s condemnation of the Russian invasion of Ukraine that asked Russia to “immediately, completely and unconditionally withdraw all of its military forces.” Two days later, during the extraordinary meeting of NATO’s foreign ministers, Turkey supported the deployment of NATO’s Response Force to NATO countries neighboring Ukraine.

It looks like Putin is not only bringing long-lost unity to the EU, but he is also reminding Turkey of the benefits of its Western ties. Western states should realize that only more unity among themselves and more determination will make Turkey reengage with the West.