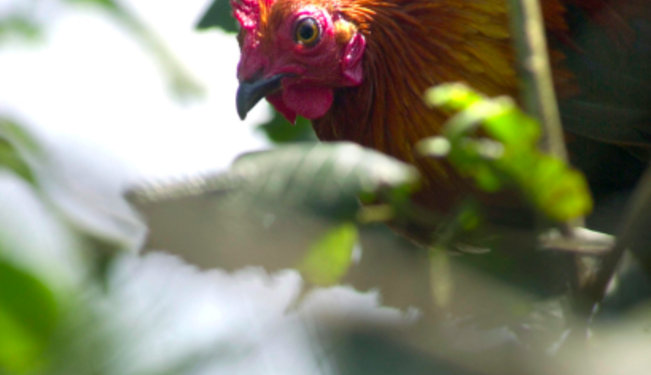 In this scenario the Belgian artist Koen Vanmechelen addresses identity, nationalism, globalisation, migration, racism, domestication, and cloning, by using the genealogy of the chicken as a point of departure for his reflections.

Koen Vanmechelen started his Cosmopolitan Chicken Project in the ’90s. Its conceptual and practical point of departure is biological and cultural diversity, or bio-cultural diversity. In 2011, in a continuation of the same theme, Vanmechelen conceived of the project Genetic Freedom, presented here.

At its centre – as in other projects of the Cosmopolitan Chicken Project – Genetic Freedom exhibits photographs of the crossbreeding of national chicken breeds. These are not manipulated images; Koen Vanmechelen crossbreeds the chickens himself, and this process is the nucleus of his project. With these photographs and a short looped film that announces the birth of a chicken, the artist presented the original Red Jungle Fowl, hen and cock, in an outdoor chicken house that was visually connected to the exhibition space.

All domestic chickens have descended from the Red Jungle Fowl. The range of the original bird stretches from northeast India across southern China, Malaysia, the Philippines and Indonesia. The domestic relatives of the Red Jungle Fowl have travelled across the world and in doing so have been transformed substantially. Meanwhile, the original has become an endangered species.

In Vanmechelen’s installation, this ‘pure’ chicken was confronted with national chicken breeds and their hybrid descendants. With a sense of humour the genealogical tree of the Belgian artist starts with a crossbreeding of the Mechelse Koekoek and the Poulet de Bresse, the Belgian and French national chickens. It continues with the crossbreeding of the resulting Mechelse Bresse and the English Redcap, followed by the cross of the resulting Mechelse Redcap and the Jersey Giant. This continues till the 15th generation hybrid, the Mechelse Fayoumi is created. The national chicken breeds, which were intended to represent their respective nations e.g. the blue, white and red Poulet de Bresse referencing the French Tricolor, turn out to be completely artificial creations themselves, formed to match national features.

Koen Vanmechelen´s project enables reflection about the notions and concepts of nationality, purity, hybridity, nature, and artificiality. The creation of true cosmopolitan chickens is presented as a symbol for global diversity. Chickens carrying the genes of all the world’s chicken breeds can be seen as a metaphor for a society that is anything but ‘pure’. The Cosmopolitan Chicken Project has laid its foundations on the concepts of mixing and mingling, and it treats cosmopolitanism as an indispensable element of progress.

Vanmechelen is a conceptual artist and uses the chicken as a metaphor for “la condition humaine”. Over the past decade Vanmechelen has collaborated with scientists from different disciplines in order to make this project possible. The coming years will bear witness to future generations of cross-bred chickens which will signify the increasing permutations of a globalised society. In 2011 Vanmechelen got an honorary doctorate for his on-going research at the University of Hasselt. A new institute entitled ʻOpen University of Diversity’ opened its doors in January 2012. Vanmechelen’s work has received international attention and the Cosmopolitan Chicken Project continues its exhibits. In 2010, the artist presented the Mechelse Silky at the World Expo in Shanghai. In 2011 the artist was invited to participate in the 54th Biennial of Venice, where he crossed the Mechelse Silky with the Egyptian Fayoumi.