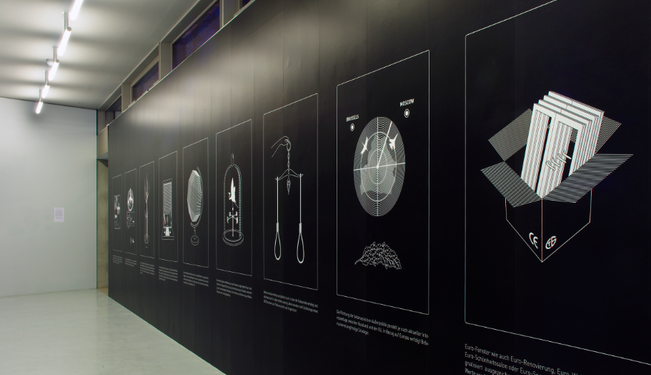 The Europe (to the power of) n project is an international collaborative art project founded to explore the possibilities of a European identity without transforming it into a substantial and exclusive one.

Answering the questions of where and what Europe actually is, or what it could one day become, is impossible. As we come closer to Europe in a geographical sense, a series of different configurations overlap: the European Union, the Council of Europe, the European Broadcasting Union, the European Club Association, to name but a few of the most prominent associations. Also, the eastern border has continually shifted during the course of the centuries: in ancient Roman times ‘Europe’ meant ‘west of the Aegean’; in the Middle Ages and modern era, the territory of Europe moved upwards to the north and the Baltic Sea; and in the 17th and 18th centuries the borderline went first to the line along the Black Sea, Dnjepr, and Ladago Lake, then to the Don, Wolga, and Kama, and currently reaches as far east as the Ural Mountains. Edgar Morin successfully summarized the inherent contradictions of European culture in his bookPenser l´Europe written in 1987: “What is important in European culture is not only the principal ideas (Christianity, humanism, reason, science), but rather these ideas and their opposites. The European spirit is not only in plurality and change; it is in the dialogue of pluralities, which produce change. It is not in the production of the new as such, it is in the antagonism of the old and the new […]”

For the project “Europe (to the power of) n” ten curators from Brussels, Istanbul, London, Łódź, Minsk, Novi Sad, Høvikodden/Oslo, San Sebastián and Taipei were invited to think about Europe from the perspective of visual art. The project approaches a Europe that is pluralistic, heterogeneous, frayed, and full of contradictions.When the choice of locations was being made, the emphasis was placed on the ones that challenge the idea of a strong exclusive European community from peripheral positions.

“Peripheral” here does not refer to geographical location or the bounds of affluence, but only to the fragile relationship of these cities (and countries) with a self-identical, “core” Europe. Some of these cities can double up to be seen as 'European centres'; for example, London as a financial capital, or Brussels as a political capital and the seat of the EU.

The “peripheral” cities either distance themselves from an – in their eyes – all absorbing community for various reasons (for e.g. Norway, United Kingdom) or they are looked at suspiciously or excluded (for e.g. Belarus, Serbia, Turkey) by the countries that already see themselves as a European Community. It can also be the case that the desire for political independence and autonomy promotes skepticism (such as in the UK, Poland, or Spain’s Basque Country). This skepticism can be highly contradictory in itself because some of the states mentioned here, are already part of the European Union (such as Poland, and the Spain) despite their skepticism. Brussels’ role seems to be most ambiguous: In contrast to its special position of strength as an important centre of international politics, there are political and social tensions in Belgium and Brussels that sometimes paralyze community life and add to the prevailing Euro-skepticism.Finally however, the economic success of the city and the country in question is basically owed to the presence of the European institutions based there.

For different reasons, the“peripheral Europe” described above shares a distanced view of ideas of an exclusive European community and – precisely for this reason – both challenges, and demands negotiation on the joint future of Europe and its relation to its neighbors.The term periphery is the most appropriate for explaining this phenomenon: it describes an outer defining line (of a district, or a town), and comes from the Latin peripheria or the Greek periphéreia, originally meaning “carrying around” or “circulation”. This circular movement, i.e., the productive and constructive “carrying around” of Europe, also forms the starting point of Europe (to the power of) n and of reflections on what Europe could be if there were no central authority or strictly pre-defined core.

China/Taiwan´s participation in this project is to be understood in an exemplary way. If a project about Europe had been carried out in the 1950s or 1960s, the emphasis would have been placed on its relations with the United States in the west, and with the Soviet Union in the east. Today, the relationship between China and “Europe” can be described as more exposed in comparison to other relationships between European and non-European countries. This is reflected not only by media coverage, but also by political, economic and cultural undertakings.Taiwan was invited to the project as this small state qualifies China's self-projection as a great, homogenous and stable block – just as the afore-mentioned peripheral European cities challenge the idea of a strong “core” Europe.

Euro-Windows
Co-authored with Lena Prents
Since the declaration of Belarus’ independence from the Soviet Union more than twenty years ago, the relationship between Belarus and Europe has been the subject of permanent discussions on an everyday level, in politics and in various scientific disciplines. In this scenario—Euro-Windows—the Belarusian artist and designer Jura Shust addresses issues of a Belarusian identity as seen against the background of the ongoing tensions between Belarus and “Europe”.

In 2011, a group of Belarusian intellectuals published the book Ways Towards the Europeanisation of Belarus: Between Politics and Identity Constructions, 1991-2010. As a graphic artist and designer, Jura Shust took up the issues addressed in this book and developed graphic visualizations for them. He designed convincing symbols in black and white print depicting the brutal normality of the judicial system, the pervasive unpredictability of the authorities, and the difficulties of coping with everyday life. The creation of national myths and the profanity of daily life coexist side by side: The national symbol of Belarus, the flying stork, appears on the label of a bottle of vodka and the “Euro-Window” draws attention to products that bear the add-on word “Euro”—which indicates good quality—and therefore literally turn into bestsellers.

‘Euro Windows’ is one out of the 30 exhibits to be part of the Europe (to the power of) n project. Shust places the motifs he developed either in a small scale on postcards and books, or in large scale on wallpapers that are put up like ads such as at the Museum of Contemporary Art in Leipzig. The choice of black and white associates them with illustrations although Shust turns the usual white pages of prints into black ones and the black lines into white ones. The size of the wallpaper refers, however, to the commercial field; to advertising.

On the one hand, the resulting series of images opens up our view of Belarus as an “island of stability and prosperity”, as its president once described it. On the other hand, it shows that some of the pro-European points of view, propagated by the critics of the Belarusian regime, are idealistic conceptions contradicted by the real “Europe”, especially in the midst of the crisis: human rights, economic solidarity, the EU or the priority of common social welfare over the interests of profit. Officially, Belarus intentionally positions itself outside of Europe today, remaining in the close vicinity of the former Soviet Republics. In the other direction, the European Union has imposed sanctions on Belarus, mainly because of the repressive politics of AlexanderLukashenko, its President. Beyond the official positioning, to Belarusians Europe either plays an unimportant role, or it represents the far away promise of human rights, civil society, and consumerism. Consequently, in his exhibit Shust looks at Europe as an ambivalent construction, positioned somewhere between worthwhile ideals (human rights, civil society) and commercial branding.

Jura Shust lives in Minsk and Vilnius. He studied Media and Visual Communication at the European Humanities University in Vilnius, a Belarusian university, in exile. In 2010 he was responsible for the graphic design of the exhibition, ‘Opening the door? Belarusian Art Today’ at the Contemporary Art Centre, Vilnius – one of the most extensively and widely discussed presentations of contemporary Belarusian art abroad. Jura Shust is the editor of the Samizdat magazine for visual culture MALA and the founder of the art and music project IOD.