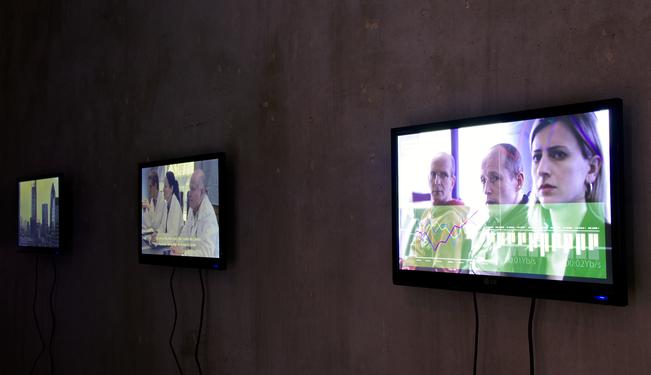 The Europe (to the power of) n project is an international collaborative art project founded to explore the possibilities of community in Europe today without transforming “us” into a substantial and exclusive identity.

A scenario is – according to its general definition – the portrayal of a possible future event or situation, including the paths of development leading up to it. In the political, economic and social spheres, but also in climate and energy research, the enactment of scenarios allows orientations regarding future developments to be discovered. The scenario technique is often used as a tool for decision-making. However, even if certain methods, procedures, and instruments are implemented, the scenario technique is a hypothetical construction of possible futures based on current and past knowledge that implicitly points towards the possibility of further alternative futures. It is this aspect of developing scenarios, the one that leads us to imagine alternatives beyond the status quo, that is especially interesting for many artists and curators. However, the correct implementation of instruments and procedures generally used in the scenario technique such as trend analysis, participant analysis, cross impact analysis, modelling, Delphi methods or road mapping techniques, and criteria such as consistence, explication of premises and statements of range do not matter. The fact that scenarios are there not only to produce or consolidate knowledge, but also to reveal the limitations of knowledge, makes them accessible to art, as one of the few social areas in which the aspects mentioned here are seen as widely productive factors.

For the project, “Europe (to the power of) n”, ten curators from Brussels, Istanbul, London, Łódź, Minsk, Novi Sad, Høvikodden/Oslo, San Sebastián and Taipei were invited to develop three scenarios, each exploring how to think about Europe from the perspective of visual art, resulting in thirty scenarios, and therefore thirty hypothetical constructions of possible futures, be they utopian or dystopian. The heterogeneous cluster of themes and aspects revolve around community, beginning with the relationship between the individual and society, forms of social organisation and of living together. They speak of the friction and the potential that arise when various cultures, hierarchies and hierarchisation meet, of the asymmetry in societal structures, of medial and mental shaping, of identities and representations of collective subjects. The complexity of art – here referring to its multiple connotations – is used to place the individual aspects in relation to one another and test them for possible associations.

In contrast with many debates concerning the concrete implementation and accomplishment of joint European agendas in the fields of politics and economics, utterances from the field of art should be understood in the following ways: as impulses that allow alternative perspectives on perception, thoughts and actions; putting opinions and values we take for granted to the test; criticising hierarchies and asymmetries; demanding that responsibility be taken; and as voicing doubts concerning the “natural” given order of things. In this respect art can begin a productive discussion about potential common values, about what Europe could be, both in the present and in the future, but it cannot close it down. In other words, the strength of art is to challenge our perception, thinking and acting without giving us specific directions but inviting us to take part in the search for a possible course of action.

The narratability of a future is shown in a very vivid way in Melanie Gilligan’s “Popular Unrest”. The five-part series, in a television format like that of “CSI”, is set in a future world that is frighteningly similar to the present. All transactions and social interactions are kept under the surveillance of a system called “the Spirit”. All over the globe, mysterious murder cases have taken place. The murders are often committed in public, but eye-witnesses can never ascertain who the attacker is. Just as strange is the fact that, suddenly, groups of people who do not know each other are coming together everywhere. In an inexplicable way, they feel a deep and lasting connection with one another. Gilligan develops a (not improbable) scenario of the world in which the self, due to its mere physicality, is directly subject to the requirements of capital. Insufficient disease prevention is punished; “debts” to society (e.g. those incurred by the unemployed) have to be paid back in the form of physical energy; and there are foodstuffs that “digest” the body from within. Cinematographically, Gilligan refers to television formats such as “CSI” or “Dexter”, or to the director David Cronenberg.

In Gilligan’s work narratability is closely related to questions of probability. Elena Esposito reduces this to a simple formula by saying that reality is improbable, whilst the fictive reality of the novel (written or filmic) is not a fiction of reality but, and here the author quotes Hans Blumenberg, “The fiction of the reality of realities”. The fictive reality of the novel portrays conditions that cannot normally be observed in the real world, i.e. conditions that allow something to appear realistic. In order to be realistic then, the novel must avoid being real. If we spoke to an economist, a scientist or even a military strategist – all professions in which the technique of the scenario plays a relevant and extremely serious role – few of them would be willing to admit the fictional character of their results. On the other hand we see that these fictions are by no means simply non-existent, or, as Joseph Vogl puts it, “[they are] facts, we can also say constructions, that intervene in reality in a manifest way.” In art the fictional character of a plot is played out. Gilligan’s “Popular Unrest”is both realistic and abstract, the scenes appear to be realistic but are not real. The series shows its construction and is frightening close to current social debates and developments.

Melanie Gilligan was born in Toronto in 1979. She currently lives in London and New York and works in a variety of media including video, performance, text, installation and music.