On February 23, Hamburg’s voters were called upon to elect a new parliament. Hamburg is Germany’s second-largest city and its most important port. But, for historical reasons, it is also one of Germany’s 16 Länder, and one of three city-states (the other two are Berlin and Bremen), that compose the Federal Republic. The Social Democrats (SPD) “won” the election, despite losing almost 7% of the vote compared to 2015.

The SPD lost many voters to the Greens, who doubled their result from 2005 and ended up in second place. The big losers of the election were Angela Merkel’s Christian Democrats (CDU), even if their losses (almost 5%) were smaller than those of the SPD. Yet their result, just over 11%, marked a historic low for the party, which only a decade or so earlier had garnered more than 40% of the vote.

Hamburg is the state with the highest household per capita income. It ranks among the top four major German cities in terms of per capita disposable income, albeit at quite a distance from the leader, Munich. A commercial center with an illustrious history — Hamburg was a prominent member of the Hanseatic League — traditionally oriented more toward London than Berlin, Hamburg is known for its “hanseatische Weltoffenheit” (Hanseatic openness to the world), its Liberalität and tolerance of diversity.

A few years ago, only 10% of Hamburg respondents said they did not want foreigners as neighbors, the lowest response rate of all Germany. Hardly surprising, the AfD, the radical right-wing populist Alternative for Germany party, has hardly gained traction in the city. On Sunday, it barely made it into the Hamburg parliament: Germany has a 5% hurdle; the AfD gained 5.3% of the vote.

Given this profile, Hamburg should be a fertile ground for the new CDU as it sought to position itself under Merkel: A modern centrist Volkspartei (people’s party), open to new developments, progressive, going with the times. These are hardly empty words. Under Merkel, the CDU put women in prominent, even unconventional positions. The most recent two ministers of defense were and are women — Ursula von der Leyen, now president of the European Commission, and the hapless Annegret Kramp-Karrenbauer, who was positioned to succeed Angela Merkel only to see her ambitions go up in smoke earlier this month.

Baden-Württemberg is symptomatic of the dramatic decline of the CDU. Unlike Hamburg, Baden-Württemberg used to be a CDU stronghold. As recently as 2001, the CDU garnered 45% of the vote in that year’s state election, the Greens just 7.7%. Fifteen years later, the CDU was at 27%, the Greens at 30%. That year, the CDU won not one seat in the state’s major cities, including Stuttgart, the state’s capital and largest city. For all practical purposes, the CDU had been reduced to a “provincial party.”

Baden-Württemberg is emblematic of the CDU’s downward spiral in the polls, reflected in the dismal result of the Hamburg election. Some commentators have blamed the party’s disastrous showing on the fallout from the farce of the vote for prime minister in the state of Thuringia, which shook the German political establishment to its core.

A brief reminder: In order to prevent the reelection of the state’s ex-prime minister, who happens to come from The Left party — the result of a fusion of the Party of Democratic Socialism (the successor of the Socialist Unity Party, the communist party of the former GDR) and disgruntled western German Social Democrats — the CDU voted together with the AfD for the candidate of the tiny liberal Free Democratic Party (FDP). This resulted in a political storm that forced the FDP prime minister to resign after only one day in office — hardly German democracy’s finest moment.

The Thuringia vote was unfortunate, particularly for the CDU, given the upcoming Hamburg state election. But the causes of the party’s decline are more profound. They are primarily structural in nature and therefore difficult to tackle.

Political parties are hardly monolithic constructs. In reality, they are composed of a number of ideational currents that, more often than not, are difficult to reconcile. The CDU has traditionally consisted of at least three major currents: Catholics, conservatives and economic liberals. This explains the catch-all appeal of Christian Democracy and its traditionally transversal constituency. For instance, although the CDU was never a working-class party, it did appeal to workers — if they happened to be Catholics.

And here lies one of the major problems for the CDU: Like other Western societies, Germany has witnessed an accelerated pace of secularization, particularly among younger cohorts. And those who attend mass on a regular basis are, as one recent article nonchalantly put it, slowly dying out.

The problems are equally serious with respect to conservatives. Traditionally, meaning until 1945, German conservatism was largely associated with Prussian Protestantism. During the Weimar Republic, its most important political representative was the German National People’s Party of Alfred Hugenberg. Hugenberg was instrumental in paving the way for Hitler’s seizing power in 1933. And although the resistance to Hitler during the Second World War was to a significant extent organized by conservatives — such as Henning von Treskow, one of the leading minds behind the failed attempt to kill the führer in 1944 — Hugenberg’s support for Hitler thoroughly discredited conservatism in postwar Germany.

Under Germany’s first chancellor, Konrad Adenauer, conservatism meant, above all, the preservation of a “natural order” that assigns each individual a role in a larger community. Central to this concept was the family and its protection as the central nucleus of society. This had significant implications, particularly for women, whose role was supposed to be limited to the three Ks: Kinder, Küche, Kirche — children, kitchen, church.

For instance, until 1958, Germany’s women were not allowed to work without explicit permission by their husbands. They were not allowed to open their own bank accounts until 1962. And it was not until 1969 that women gained complete legal competency. A woman’s right to abortion was not granted until 1974, and this with strict conditions, generally limited to the first 12 weeks of gestation.

All of these developments are anathema to the conservative view of the world. Yet in recent years, things have gotten even worse with the success of the LGBTQ community in gaining official, and particularly legal, recognition for their unions. In 2017, a majority of representatives in the German Bundestag, including a significant number of members of the CDU — who were allowed to vote their conscience by Merkel — voted to legalize same-sex marriage.

For the conservatives, this was a disaster. In their view, same-sex marriage represents a direct assault on the traditional conception of marriage, based on the “natural” union between a man and a woman, designed for assuring the continuity of the community via procreation — in a “natural way.”

Undoubtedly, Germany has been confronted with enormous changes, as has been the case for the rest of advanced liberal democracies. The CDU under Merkel has made great efforts to adjust to these changes. In the process, however, it has managed to disenchant not only a substantial segment of its traditional constituency – primarily Catholics and conservatives when it comes to “lifestyle” questions, but also potential new voters.

Two examples might make the point. A few years ago, the CDU-led government proclaimed its commitment to a significant Energiewende, a radical reversal of Germany’s energy policy. Yet in the meantime, little has changed. Germany still depends to a large extent on coal and, for that matter, the environmentally worst kind of coal, lignite. While other European countries, such as the UK, have managed to wean themselves off coal, Germany continues to be addicted to it.

Or take tobacco. By now it is well established that smoking causes all kinds of health problems, from emphysema to cancer. In response, virtually all members of the European Union have banned public tobacco advertising — except for Germany. There, leading representatives of the CDU blocked attempts to outlaw public advertising for tobacco products — even near schools — despite the fact that in Germany, more than 100,000 people die as a result of smoking-related complications every year. Over the past few months, things have changed. The CDU has agreed to a “phasing out” of public tobacco advertising — clearly an instance of too little, too late.

Under the circumstances, the CDU downward spiral in recent years is hardly surprising. On the one hand, its turn to the left on cultural issues such as same-sex marriage and immigration antagonized some of its traditional constituencies, a portion of which defected to the AfD. On the other hand, its constant caving-in to the demands of powerful lobbies, such as the coal industry, alienated potential new voters, particularly among the young who would rather vote for the Greens.

In the process, the latter have established themselves as a progressive, yet moderate catch-all party, in tune with western German sensitivities (the party has great difficulties in the eastern part of the country). Against that, the AfD has established itself as the repository of the disgruntled, disenchanted and nostalgic, primarily in the east. Caught in the middle, Merkel’s CDU has been put between the proverbial rock and a hard place. The result has been a mixture of cluelessness and consternation, which has done little to regain confidence in Merkel’s ability to lead the CDU out of the morass of its own making.

For the past two decades, the German public has incredulously watched the agony of the Social Democrats, a once proud party that has seen its support base evaporate in a growing number of German states. The SPD’s travails obscured the fact that the CDU was following suit. The dramatic losses of its two major Volksparteien, both of which guaranteed political stability and predictability for much of the postwar period, are a cause of grave concern not only for Germany, but for all of Europe.

*[Correction: An earlier version of this article mistakenly referred to Baden-Württemberg as a former SPD stronghold. Updated at 14:10 GMT, 2/26/2020.] 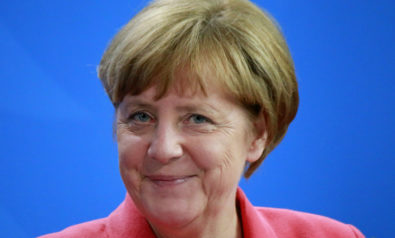