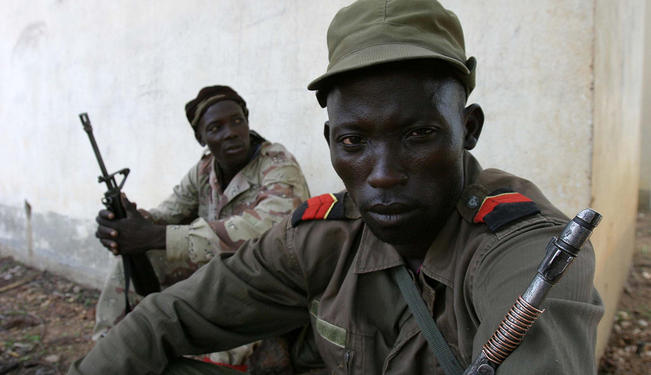 The Central African Republic may come to serve as a spark for what may yet become the “African Spring.” Daniel Wagner and Giorgio Cafiero analyze the implications of political change in the country.

As was the case in Mali, recent events in the Central African Republic (CAR) have the potential to profoundly impact the dynamics of political change in Africa, where the plethora of failed or failing states provides a ripe breeding ground for extremists to assume power. The CAR’s location, being landlocked and surrounded by the failed states of Chad, the Democratic Republic of Congo, and Sudan, make it vulnerable and beholden to its neighbors. Being mineral rich makes it ripe for political change and a natural target for extremists.

A rebel coalition (Séléka) has taken over a dozen towns in the CAR over the past month — including four regional capitals. The country’s military, along with its regional allies in the Economic Community of Central African States (ECCAS), have secured a buffer zone north of the capital city, Bangui. As a result, the rebels decided not to assault Bangui and agree to negotiate with the government, being led by President Bozizé, in Gabon this week. Regardless of the outcome, democratic reforms are unlikely to be part of the CAR’s political landscape in the near future.

Four militant factions compromise Séléka — the Union of Democratic Forces for Unity (UFDR), the Convention of Patriots for Justice and Peace (CPJP), the Democratic Front of Central African People (FDPC) and the Wa Kodro Salute Patriotic Convention (CPSK). Their success, in such a short period of time, highlights the government’s inability to control the majority of its territory. Séléka is unlikely to compromise much, given its momentum and the country’s wealth of natural resources (gold, minerals, diamonds, uranium and timber). Bozizé has accused the Sudanese regime of sponsoring Séléka — which Khartoum denies. The CAR also claims that Sudanese, Nigerian and Chadian mercenaries have joined Séléka.

Séléka justifies its use of violence on the grounds that Bozizé has failed to live up to the terms of a 2007 peace agreement — which includes providing ex-rebels with employment and money. From their perspective, his presidency lacks legitimacy. The majority of the rebels come from the country’s northeast. Séléka accuses the central government of neglecting the northeast while showering Bozizé’s cronies with natural resource wealth as a means of securing loyalty. Séléka claims that its actions are driven by a “thirst for justice, peace, security and economic development of the people of Central African Republic.” Bozizé and many of his supporters believe that the rebels are manipulated by foreign powers (primarily Sudan), which are determined to deprive the CAR of its natural resource wealth.

Despite the international community’s support for a brokered political solution, the prospects for peaceful settlement are undermined by the two sides’ incompatible stances on Bozizé’s role in resolving the conflict. A spokesman for Bozizé’s ruling party stated that any proposition that the president step down would be “rejected systematically.” In 2011, the president was reelected to a second term (ending in 2016) in an election that many Central Africans and human rights organizations label as fraudulent. Although Bozizé promises not to seek a third term, he has said he must remain in power for the next three years. A representative of the CPSK stated that a peace deal is only possible if Bozizé exits the presidency. Whether either side will compromise remains to be seen, however, it is unlikely that much progress will be made at the bargaining table.

Sadly, violence and instability is nothing new for the CAR. Since achieving independence from France in 1960, the country has experienced numerous armed rebellions, bloody coups d’état, military revolts and oppressive leadership. Rebels from among its neighboring states have exploited the CAR’s weak geostrategic position for many years. Foreign governments — including France, Libya, Sudan and Chad — have historically allied themselves with various governments or rebel factions in the CAR to advance their own national interests. As a result, large flows of weapons are constantly moving across the country’s borders and outside the control of the government.

The political change that has been so prominent in the Middle East and North Africa over the past two years has been largely absent throughout sub-Saharan Africa (SSA). The key socioeconomic and political factors that have driven citizens of MENA into the streets — high unemployment, corruption and authoritarianism — are in some cases even worse in SSA. In Zimbabwe, Namibia, Senegal, Kenya, Swaziland and South Africa the unemployment rates range from 25 to 95 percent. Last year Transparency International ranked many countries in SSA among the worst in the world in terms of corruption. Few sub-Saharan leaders came to power through elections deemed free and fair by international observers, and six of the region’s leaders have ruled for more than a quarter century.

So why have sub-Saharan Africans not followed their MENA counterparts and launched an “African Spring”? We identify five primary reasons:

1. A fear of greater instability has likely led citizens of SSA to act more cautiously and refrain from public demands for democratization. Within the last two decades, SSA has been far more prone to produce failed states than MENA. Such a legacy has undoubtedly shaped perceptions about political reform.

2. The profound ethnic, linguistic and religious divisions in SSA tend to be stronger than a sense of national unity. This contrasts with Egypt, Libya and Tunisia, where deep tribal and ideological divisions exist, but more than 90 percent of citizens are Arab/Berber, speak Arabic, and practice Sunni Islam.

3. Whereas the Egyptian and Tunisian militaries maintained a sense of independence from the Mubarak and Ben Ali regimes, the militaries put pressure on their leaders to relinquish power in response to the unprecedented protests that erupted two years ago. In many sub-Saharan African states, the militaries are less prone to challenging their leaders.

4. Given the important role social media and the internet played in unifying citizens of MENA against authoritarian regimes, technological constraints, lower income levels and lower literacy rates in SSA have prevented citizens from utilizing social media for political mobilization.

5. The MENA movements were largely driven by increased levels of urbanization, while the majority of sub-Saharan Africans live outside urban areas and are less connected to urban dwellers than their North African counterparts.

All five of these factors bode poorly for Central Africans, who are deeply divided along ethnic and religious lines. The Baya, Banda, Mandjia, Sara, Mboum, M’Baka, and Yakoma ethnic groups each constitute between 4 percent and 33 percent of the population. Half of Central Africans practice Christianity, 35 percent hold indigenous religious beliefs and 15 percent are Muslim. Social media cannot be an influential force for political reform in the CAR — out of a population of approximately five million, fewer than 23,000 are Internet users, and the adult literacy rate is less than 60 percent. The nation’s urbanization rate is just 39 percent — only two percent higher than the SSA average — yet significantly lower than the North African average. Finally, since Bozizé came to power following a coup in 2003, his forces have fought mercilessly to keep him in power, which is not conducive to an uprising.

It is within this context — with the CAR being a weak state, divided by tribal, ethnic and religious divisions, with a historical legacy of authoritarianism, and with low levels of trust between the government and its opposition — that the latest rebellion has taken hold. Prospects for peace are not good. Given its momentum, and the nature of political change occurring elsewhere in Africa, it is likelier that Séléka will be victorious than not. But what is unlikely to change is the basic political composition of the country.

If we consider what has happened in countries such as Mali and Sudan, and what is now happening in the CAR, it appears that radical political change in the failed or failing states of SSA is the new normal. Given that the conflict in the CAR is reaching a crescendo at the same time that the UN intends to send a military force to attempt to wrest control from al-Qaeda affiliates in Mali, the CAR may unwittingly find itself in the middle of a higher stakes game of chess, as the West attempts to battle extremist forces and influence the nature of political change in Africa. Depending on the outcome, the CAR may come to serve as a spark for what may yet become the ‘African Spring.’

*[A version of this article was originally published by The Huffington Post.]

Crisis in the Central African Republic