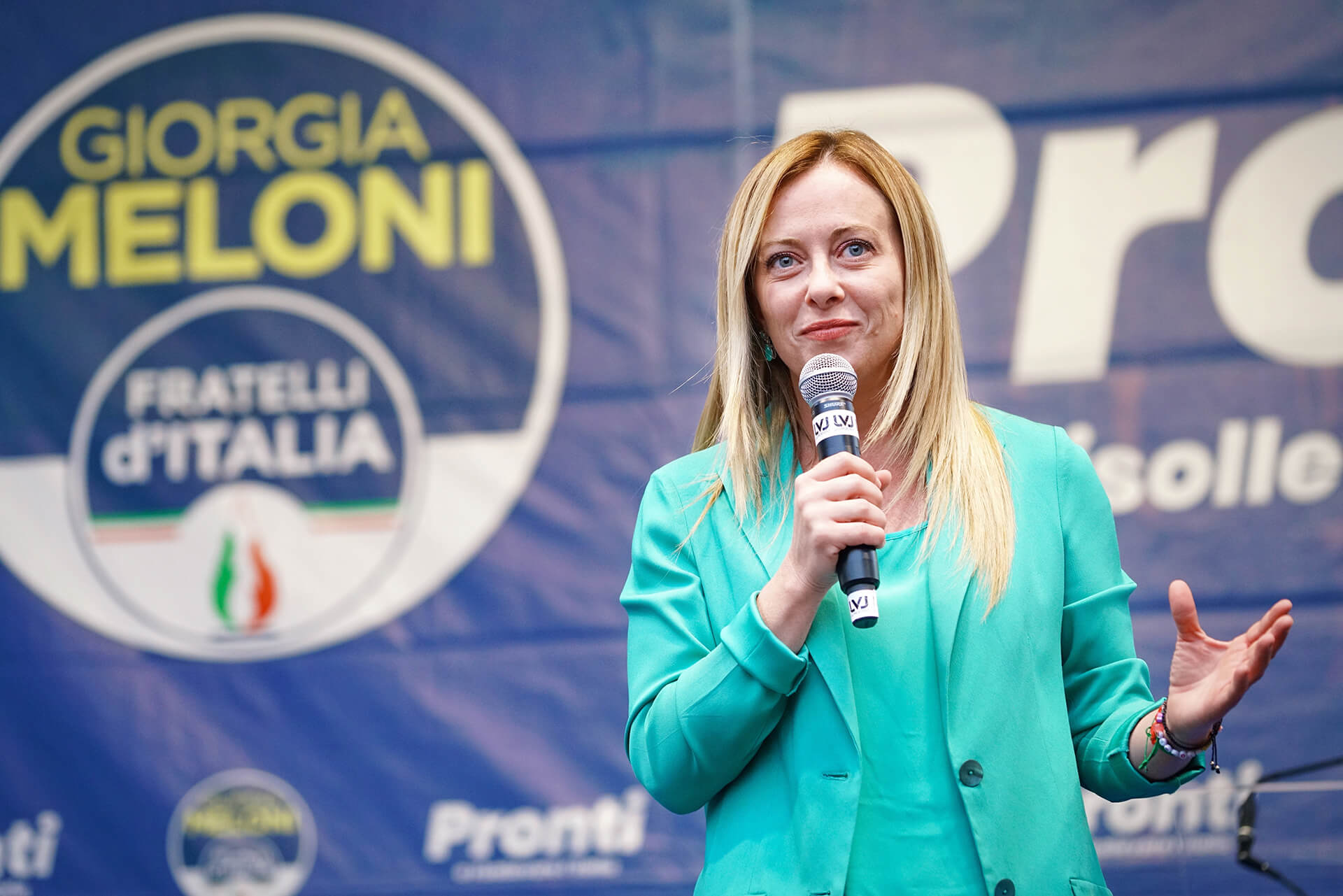 The latest surprising – and for some, fear-inspiring – turn of political events took place in Italy on Sunday when Giorgia Meloni’s flag-waving party, Brothers of Italy (Fratelli d’Italia) obtained 26% of the vote. In the coming weeks it will most likely form a government and Meloni will become Italy’s first female prime minister.

Throughout the campaign the Western media chose to highlight a certain continuity between Meloni’s party and Benito Mussolini’s Fascist rule in the first half of the twentieth century. Similarities and even some odd historical continuities do exist, but the historical context is wildly different today. Meloni’s trendy throwback nationalism has no chance of replicating Mussolini’s meteoric rise to fame and power. The odds are any government she cobbles together will collapse within 18 months. That’s what almost all Italian governments do.

Fear of resurgent fascism currently ranks alongside fear of Russia as an effective ploy for getting the public’s attention. On the eve of the Italian election, Jason Horowitz at The New York Times wrote, “Italy could get its first leader whose party traces its roots to the wreckage of Fascism.” Horowitz recounts that “formerly taboo parties with Nazi or Fascist heritages that were long marginalized have elbowed their way into the mainstream. Some are even winning. A page of European history seems to be turning.” The idea of turning the pages of history is sure to have NYT’s readers eagerly turning its pages, or at least scrolling down the web page.

Meloni has, of course, fueled the fire with her rhetoric, particularly thanks to her slogan “God, family, fatherland.” That’s a page she took straight out of Mussolini’s book. In the confused aftermath of the First World War, il Duce defined Italy as a proud European country ready to impose its geopolitical will in competition with its neighbors. These too are confused times. But Meloni is no Mussolini. Her rise to prominence, if not power, has more to do with the Italians’ growing frustration with the post-World War II constraints imposed on Italy, precisely to prevent a new Fascist takeover, than it does with a sudden conversion of the population to post-modern fascism.

In her victory speech, Meloni claimed – as all politicians tend to do these days – that the results were an unambiguous call for a new direction in Italian politics. Her score (26% of the vote) reveals, in her words, a “clear indication that [Italians] want a center-right government to guide Italy.” Equally as predictably, she promised not just to promote her party’s agenda but to unify the nation. “If we are called upon to govern this nation, we will do so for all Italians, with the aim of uniting the people”

A concept developed and now ritualized in modern democracies that allows leaders to cite profoundly ambiguous results of elections as a clarion call for the implementation of a specific agenda which a clear majority of citizens and voters simply do not adhere to.

The New York Times notes an important statistic, that “only about 64 percent of the population [cast] a vote, a staggering result in a country where voter participation traditionally has been high.” That further diminishes the significance of the 26% Meloni received, by more than one third. If those who fear a new Fascist regime in Italy and elsewhere in Europe were willing to be strictly objective, they should feel reassured. The trend may be worrying but numbers simply aren’t there.

Meloni’s “clear indication” has no meaning. Elections no longer reflect “the will of the people.” Claiming they do is either naïve or dishonest. We live in a world governed by hyperreal democratic rituals rather than democratic principles. The popular will is not expressed in elections. Democratic rituals focus on two things: media heavy electoral campaigns and the mechanical and largely symbolic act of individuals voting. Elections increasingly resemble the sour and shifting mood of an audience in a movie theater watching a film they are sorry they paid money to come and see.

Italy, Europe, and the World Needed Super Mario to Stay On

The overall trend in electoral politics consists of growing disaffection of the public for both political debate and elections themselves. Debate is now dominated by triviality and grandstanding, supremely indifferent to the issues that matter.

Why bother voting? Increasing numbers don’t. At the same time, many of those who vote do so with the intent of sending an easily decodable message to their elected officials: “Anything that undermines and contradicts the current system is preferable to ‘more of the same.’” Whether it’s Trump, Meloni, LePen or even Boris Johnson (“Get Brexit done”), voters seem to be saying: “Please go ahead with your inane promises. Start dismantling a system we don’t understand, we don’t control and we don’t want to see continue in its current form.”

Repeated across multiple elections in a variety of Western democracies over the recent decades, the pattern should be obvious to all. But the media ignores the reality, perhaps to demonstrate its quasi-religious “belief” in democracy. Since the famous “hanging chads” of the 2000 presidential election, the US has provided multiple examples – both comic and tragic – of the most absurd democratic distortion, culminating with Trump’s “Stop the steal.”

Acknowledging the dystopian system we have created will typically be branded as either subversion or defeatism. The fiction of a functioning democracy is too important for either politicians or the media to admit the disturbing reality: that “we the people” are the playthings rather than the agents of democracy.

That uncritical,unreflecting belief in our commitment to democracy is, in fact, the mother of all fake news. Its latest avatar is the absurd contention, promoted with Puritanical zeal by “right-thinking people,” that if only misinformation and disinformation could be rooted out and cast into some kind of cultural garbage heap, healthy democracy will be restored. But democracy, in the hands of venal politicians, has transformed into a magma of supposed “authority,” shared between political leadership and the media. This fetid glob of pulp political fiction has liquified to the point of becoming a fountain, not of lies (though there are plenty of those) but of permanent distortion. It acts like a filter that warps even the possibility of critical thinking. Never has there been such an insistence on official, sanitized truth that not only must be believed, but also has the right to banish anything that contradicts established political norms.

The NYT, ordinarily dismissive of the impact of history on current events, predictably lamented what it sees as a historical trend. “The victory, in an election with lower turnout than usual, comes as formerly taboo and marginalized parties with Nazi or fascist heritages are entering the mainstream — and winning elections — across Europe.” In Horowitz’s article published on the eve of the election, he referred to the “indifference of Italian voters to the past.”

Coming from the New York Times, this concern with “indifference…to the past” should surprise any attentive reader. As the Ukraine war continues to rage, NYT and most of the media have consistently refused to evoke any of the significant events that preceded Russia’s invasion on February 24. Here at the FO Devil’s Dictionary have consistently pointed out the allergy of the newspaper and today’s media in general to anything more than a superficial consideration of a chain of the historical events that led up to the invasion. Those events date back to 1991 and reveal a consistent pattern that led to the current situation that has now brought the world to the brink of nuclear war, with no resolution in sight.

History happens to be useful. It structures constructive dialogue. It makes problem-solving possible. So does nuclear conflict, you might say, if you’re more interested in ending rather than reducing the tension. But the definitiveness of that solution should give us pause.

With 64% of her 26% Meloni sees a “clear indication” of the will of the people. A group of appointed officials at the US State Department believe that by refusing to allow Ukraine to negotiate with Russia they are fulfilling the will of the American people. As two former high level US diplomats have pointed out in an article in Newsweek, a vast majority of the world simply does not agree.

More on that later.