The nomination of half-Indian, half-Jamaican California Senator Kamala Harris as the Democratic vice presidential candidate is a historic moment in American politics. The Indian American diaspora is justifiably proud of it. However, back home, it was Prime Minister Narendra Modi’s attending the foundation-laying ceremony to build a temple of Hindu god Ram in Ayodhya at the site of a historic mosque destroyed in 1992 that was treated as a watershed event. Several Hindu secularists and liberals like Ashwin Sanghi have described it as the moment when Hindus finally took a stand against centuries of oppression. The contrast could not be more jarring, and it is worth examining this Hindu ethos.

Although an atheist, I find several teachings of Hinduism instructive and the author’s arguments troubling. While recounting the history of Islamic and Christian subjugation of Hindus, there is little mention of the role the caste system played in the flight of the downtrodden to other religions, which offered dignity and entry into their places of worship. Without condoning proselytizing in Islam and Christianity, it should be acknowledged that this dark chapter is also glossed over in India’s history textbooks.

The selective outrage is further complicated by the recently passed Citizenship Amendment Act (CAA) in which only Muslim refugees from neighboring countries were excluded from seeking fast-track citizenship. Using the author’s logic, either Christians should be left out of the CAA because they have other countries to seek asylum in, or persecuted Muslims from neighboring countries should be included in the CAA.

While discussing demographic changes, India is compared with Pakistan and Bangladesh. Should a liberal and secular Hindu entertain such comparisons? Or should he have loftier goals of emulating liberal democracies at the forefront of scientific inquiry and technological progress?

Since distorted history is the main complaint, when the British colonized India in the 1700s after 1,000 years of Muslim rule, it was still competing with China as the world’s largest economy. Despite more than a millennium of Muslim and Christian proselytizing, 78% of undivided India in 1941 was Hindu. While India’s Muslims grew from 9.9% to 14.2% between 1951 and 2011, Hindus have practically held steady, going from 81% to 79.8%. Religious reorganization among minorities warrants sociological studies, but Islam has not encroached on Hindu territory in independent India. Without condoning the looting and destruction of Hindu temples by Muslims, the origins of this narrative of Hinduism being in danger are worth pondering over.

Making common cause with Jewish history by invoking “collective memory” and yearning for an Israel-like muscular Hindu state is another favorite pastime of the “new” India. I admire the tenacity of Israelis in building a developed country in a desert, surrounded by hostile countries, but it is in a constant state of conflict and financially unsustainable without outside support.

The biggest irony in today’s majoritarian India is that the 150-year British rule, sustained with the help of several Hindu enablers, destroyed the Indian economy. And yet, English is the favored medium of instruction for the majority of children of the right-wing Hindutva brigade, and they would escape India for greener pastures in Britain at the drop of a hat. Hindus searching for pride in Ayodhya are socially trying to emulate regressive Islam while craving a stable, forward-looking, Western-style economy rooted in tolerance.

Regarding the Supreme Court’s Ayodhya verdict that granted the Hindus sovereignty over the disputed site last year, the author warns us against being selective, but the court has often acknowledged its fallibility. It avoided the question of an earlier existence of a Hindu temple on the disputed land. The court settled a narrower property dispute, ruling that Muslims cannot prove uninterrupted ownership of the land. Given how, since independence, the state allowed Hindus — through acts of omission and commission — to install idols in the disputed structure, the judiciary’s verdict resembles a circular argument. I still believe that a Hindu temple was destroyed to build the Babri Masjid. However, I question the utility of this relitigation of history behind the facade of due process.

Sanghi’s use of statistics regarding support for suicide bombings in Muslim-majority countries again seems misplaced. Islam was at the forefront of scientific inquiry and cultural supremacy in its heyday, but most of those countries are in decline today. Sympathy for suicide bombings among French, British and American Muslims is worrisome, but deranged non-Muslim gun owners kill more Americans every year than Islamic terrorism does. Should India not align with the US because half of America swears by gun rights? Islam is in dire need of modernization, but the reality is more nuanced than the author’s arguments.

Equating Modi’s presence at the Ayodhya ceremony with Queen Elizabeth II being the head of the Church of England or with a US president attending the National Prayer Breakfast is equally misleading. I find nothing wrong in Modi attending Diwali or Holi celebrations. The queen of England presiding over the laying of the foundation of a church where a mosque once stood, or an American president breaking ground for a church on land once home to a synagogue, would be a fair comparison.

Other than the treatment of subjugated castes, I would not expect any apology from Sanghi. While being a proud Hindu, perhaps he also agrees that several other countries broke the shackles of colonization decades before India did.

If the author believes in individual rights, democracy, free markets, freedom of speech, freedom of religion, gender equality, LGBTQ rights and racial equality, I urge him to defend them. Like other religions, Hinduism’s record on these issues is mixed, and Hindu ethos does not offer any vision resembling a modern republic. He should raise his voice when innocent people are killed by Muslim or Hindu mobs, or when the ruling Bharatiya Janata Party calls anyone questioning the government anti-national. He should denounce Modi when the prime minister decimates institutions like the Election Commission by shunting out his vocal critic Ashok Lavasa.

Regardless of caste, creed, race or religion, protecting minorities from tyranny of the majority is the ethos of a republic, which is better than the author’s Hindu ethos. We can acknowledge Hinduism’s teachings like vasudhaiva kutumbakam (the whole world is one family) or agree that Hinduism examines the human condition better than most other religions and still fight for the Republic of India. Unfortunately, while the Congress party swung too far in favor of minorities, Modi has now unleashed the majority. In the process, he has destroyed the economy, and the real loser of this ethos is the Indian common man. 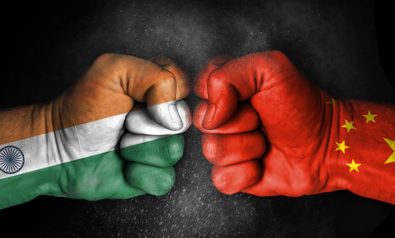 Why Are the Indian and Chinese Economies Decoupling?