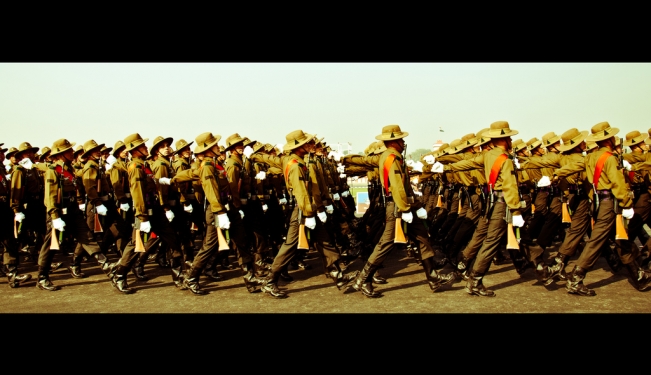 In retrospect, India's foreign policy trajectory since the 1980s has been a series of leaps and bounds towards reconciliation with the United States. The two democracies were separated by the Cold War, near-adversaries in the 1970s after India broke off Bangladesh from Pakistan, and wrenched farther apart by the US sanctions and condemnation that followed India's nuclear tests in 1998.

A seminal visit from President Clinton in 2000 did much to repair ties, but it wasn't until the Bush administration, focused on the China threat and the possibility of India as a rising Asian counterweight, that relations really flourished. In 2005, India and the US signed a far-reaching strategic partnership, an unprecedented defense cooperation agreement, and – perhaps most importantly – a civil nuclear cooperation deal that, in effect, legitimized India's nuclear arsenal by exempting India from some demands of the global nonproliferation regime. In parallel, a flow of advanced weaponry from the US to India began in earnest, covering ships, aircraft, artillery, and other equipment.

In part, the defense relationship benefited from the fortuitous coincidence of strengthening ties with an obsolescence wave. Many of India's Cold War purchases from the Soviet Union, its superpower patron, were proving difficult to maintain as Soviet supply chains fragmented across multiple post-Soviet republics. Heavy weaponry, particularly tanks and aircraft, were nearing the end of their lifespan anyway.

It is therefore no surprise that, the Gulf monarchies aside, India was a bright star in an otherwise moribund arms market. India is the second largest importer of arms after China. Seventy percent of its arms procurement is comprised of foreign purchases. A roughly $27bn defense budget for 2008-8, nearly half was apportioned for new hardware.

This influx was also a function of a broken indigenous defense production base, one that has been unable to produce much-needed light artillery or light combat aircraft for many years, and a rising sense of participation in wider Asian great power politics (from 2005 onwards, India's border dispute with China also began to flare up, just as China was emboldened by its resilience during the global financial crisis).

The Indian Air Force was particularly active. It purchased three Israeli Phalcon radars on upgraded Il-76 TD aircraft (crucial to modern air war, where combat takes place 'beyond visual range'), six American C-130J Hercules special operations aircraft, 180 Russian Sukhoi Su-30 MKI heavy fighter aircraft (to be the backbone of India's combat fleet), and twelve P-8I sub-hunting and reconnaissance aircraft. These purchases were alongside key naval sales, such as the import of an old American 'landing platform dock', which was recently deployed to rescue Indian citizens from Libya. All in all, India is forecast to spend in excess of $80bn on arms in the five years between 2010 and 2015.

The jewel in the crown of these defense sales was supposed to be something called the MMRCA competition. MMRCA stands for medium multi-role combat aircraft. India allocated around $10bn to purchase 126 multirole aircraft (i.e. those configured for both air-to-air combat and strike missions). The MiG-21, an old Soviet plane, is the backbone of the Indian Air Force. India flies more than 200, but as they were acquired in the late 1960s (acquitting themselves well in the 1971 war with Pakistan), they are fast approaching obsolescence. The rapidly falling number of squadrons, along with Pakistan's acquisition of advanced variants of US F-16 fighters, made replacing the MiG-21s an imperative for Delhi.

Six aircraft entered the fray: the Swedish Saab Gripen, Eurofighter Typhoon, French Dassault Rafale, Russian Mikoyan MiG-35, and the American F-16IN and F/A-18IN Super Hornet. The latter two aircraft, both of American origin, were thought to be shoo-ins for victory, as it was widely supposed that India would look to cement the strategic relationship by tying itself into US supply chains and making a powerful demonstration of its commitment to an American, not Russian, future. Indeed, Russia's aircraft, the MiG-35, was an updated version of a MiG-29 (which India already operates) and would have made India's entire fleet of fighter aircraft reliant on Russian support.

And what could the Europeans possibly offer India? Whereas the US would determine the strategic future of Asia-Pacific, the EU was mired in a series of debt crisis. Its member states, including the most powerful, Britain, had eviscerated their defense capabilities to balance the books. Sweden was a bit part player in international affairs. India might buy an aircraft, but would it buy strategic clout?

And then, in late April 2011, India announced that it was the Typhoon and the Rafale, the only two European aircraft on the list, which were shortlisted – the US was out of the competition. The 'downlist', as it was called, sent ripples well beyond the aerospace sector; the US ambassador to India resigned shortly thereafter.

Theories abounded as to why India had confounded expectations: that the US was an unreliable ally (it continued to arm Pakistan despite Islamabad's sponsorship of militant groups, and was prone to cutting of assistance in times of need); that Delhi did not wish to alienate China by deepening the alliance with Washington and thereby confirming Chinese fears of 'encirclement'; or that the US simply refused to transfer enough technology over to India (as the Europeans promised to do with the Typhoon). The first two of these theories may well have some merit.

India's decision to set up and strictly adhere to a process in which the technically superior aircraft beat out the politically expedient reflects a residual reticence in Indian attitudes to the India-US alliance, a bureaucratic-political skepticismof moving too close to Washington, too fast. If India had decided its future lay with Washington, that it could not hope to hedge against a rising China without yoking its future to America's Asia policy, then an American aircraft would have been a certainty.

Ashley Tellis, a prominent US official who played a significant role in the 2005 nuclear deal, has noted that "the US should take some solace from the fact that the exclusion of its airplanes from this race does not portend anything injurious for the long-term health of its strategic partnership with India". This may be correct, but nor does the deal indicate that the partnership is a roaring success.

This has a few implications. First, putting only the Dassault Rafale and the Eurofighter Typhoon on the shortlist means that India will end up with a very top-heavy air force. In fifteen years time, it will have a large number of heavy, advanced, expensive fighter jets, and a large number of lightweight, cheap and middling-quality light fighters. There won't be much in the middle. Had India bought the F-16 or F/A-18, these cheaper planes would have bulked up the lower ranks.

Second, alliance dynamics in Asia remain uncertain. India is unwilling to throw itself into any project to balance against China, because it knows that it has to live, trade, and cooperate with Beijing despite their border dispute. India prefers a balanced alliance portfolio, working with Southeast and East Asian states like Singapore and Japan, rather than relying entirely on the US.

Third, and finally, India's military modernization will be a rocky process, confusing outsiders and generating much controversy. India has a long way to go before its force structure matures; it has enormous problems fielding advanced tanks; it still lacks proper light artillery for the mountain areas; its airlift capacity is highly limited, which is a problem given the size of the country; and military doctrine is in a period of flux, as the army tries to work out how to fight against Pakistan without triggering nuclear war, and the air force struggles to carve out its own role without becoming hitched to the army. These problems will take years to iron out, and India's frequently dysfunctional defense bureaucracy offers few reasons for comfort.