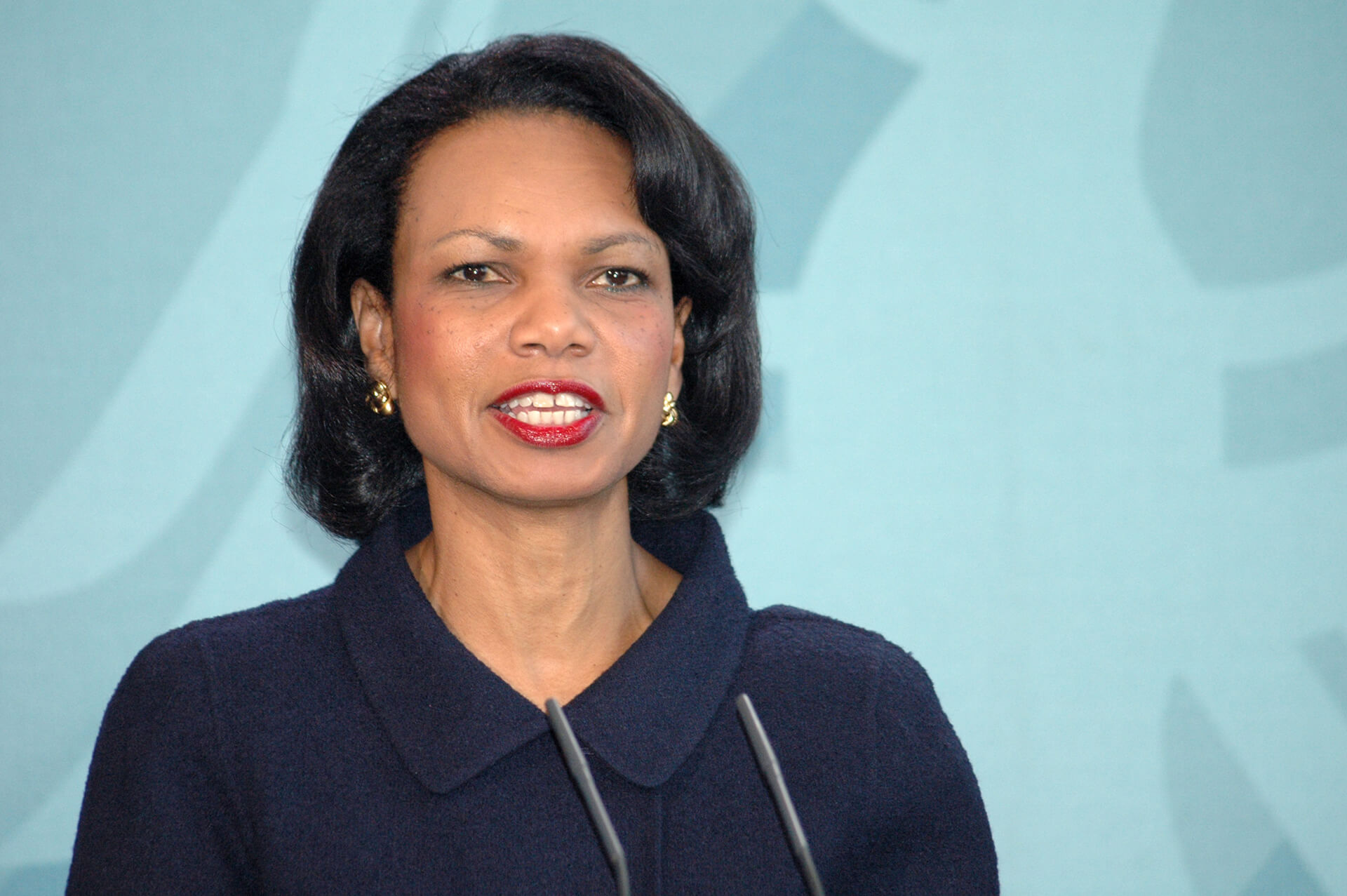 DECEMBER 6, 2005 – BERLIN: US Secretary of State Condoleezza Rice at a press conference after a meeting with the German Chancellor in the Chanclery in Berlin. © 360b / shutterstock.com

As George W Bush’s National Security Advisor and subsequently Secretary of State, Condoleezza Rice was a prominent face in the news two decades ago. Young, black, female, attractive and single, she stood out in the pale crowd, giving a kind of offbeat credibility to a team of aging establishment white men.

Rice disappeared from the news cycle when a young, attractive black male, Barack Obama, who was also a brilliant rhetorician, triumphantly replaced the Bush administration.  Obama displayed a star power not even Rice could compete with at a moment in history when the electorate wanted to dismiss from memory everything associated with the Bush years.

In contrast with Obama’s Kenyan heritage, Rice’s ancestors were slaves liberated by Abraham Lincoln’s Emancipation Proclamation of 1863. Jim Crow, the brutal apartheid-style system that replaced slavery, lasted 100 years. Forced to act by a well-organized, non-violent civil rights movement, President Lyndon Johnson pushed through the Civil Rights Act of 1964. This monumental legislation demonstrated the willingness of a majority of white politicians to entertain the idea that blacks deserved the same respect before the law as “normal Americans,” defined at the time, in the dominant cultural mindset, as White Anglo-Saxon Protestants (WASPs). Today, Fox News host Tucker Carlson refers to them as legacy Americans.

Born a year before the fateful day that saw Rosa Parks refuse to obey a Montgomery, Alabama bus driver’s order to give up her seat to a white person, Condoleezza Rice grew up during a momentous period of history for black Americans. The incident in the bus set off a decade of growing protests that led to the legislation of 1964, but also – just to prove that nothing had really changed – to Martin Luther King’s assassination in 1968.

In 1982, at the age of 28, Rice underwent a political conversion. She abandoned the Democratic party that had so vehemently pushed through the civil rights legislation under Johnson. She joined the Republican party that had already become the new home of traditional Southern racists. Rice claims her decision was influenced by her father, who never forgave the Jim Crow Democrats for preventing him from registering to vote. Had the young lady failed to notice the radical switch in the racial politics of the two parties? In any case, she clearly felt at home in the Republican party.

In 1963, Birmingham, Alabama sealed its place in US history books when four black girls, one of them a classmate of young Condoleezza, died in the KKK bombing of a Baptist church. This should have taught the Birmingham native  something about segregation and racism and the urgent need to overturn a few nasty cultural habits and maybe even some institutions. But she already lived in a different world. At the age of three, she was learning French, figure skating and practicing ballet in Alabama. As a teenager she attended an exclusive Catholic school in Denver, Colorado. During this period, her father disparaged the civil rights movement, whose leaders he called “uneducated” and “misguided.”

Growing up as a black kid, first in the deep South and then in the genteel North, Rice should have acquired a sense of history permitting her to notice, in today’s world, after the events surrounding George Floyd’s death in 2020, to what extent the movement towards integration inaugurated by the Civil Rights movement has failed. That is why it sounds surprising to hear her stand up today to defend her political class’s contribution to a different attempt at integration, one that implicates all recent presidents of the United States and has come to the fore in the guise of a global catastrophe.

Apply measures intended to make a minority conform to the expectations of a dominant majority and ultimately be judged by its inevitable failure to follow the majority’s cultural dictates.

Rice’s rhetorical willingness to “go out on a limb” signals how unsure she is of her historical footing here. She may be unconsciously aware, on the basis of the history of her own people, that doing “everything possible to integrate” a group of people into a “system” is a process fraught with dangers. The more one insists on conformity to pre-established principles instead of the need to mutually adapt to a new, more complex reality, the more likely integration will fail. The uprising provoked by George Floyd’s murder at the hands of a white policeman two years ago demonstrates that, other than in the realms of sports and entertainment, racial integration has remained a chimera in the US.

But Rice’s evocation today of integration has nothing to do with the relationship between blacks and whites. It concerns a nation whose identity officially changed in 1991 from the Soviet Empire to the Russian Federation. Rice is now concerned with defending the honor of her clan, the presidents and administrations from both parties who have clearly misunderstood and consequently mismanaged their attempts at integrating the remnants of the Soviet Union into the American global financial, economic and military empire.

The established political class in Washington feels it necessary at all times to deny any responsibility for its role in an obvious historical mess. Despite the fact that the Bill Clinton administration could, at one point, proudly boast about its successful meddling in the 1996 Russian election. The article that cites Rice’s declarations in Aspen also quotes Clinton, the president who oversaw a chaotic campaign by American politicians, economists and consultants to “modernize” and thereby integrate the Russian economy into the dollar-based global economy under US guidance. That effort included finding clever ways to dismiss the protest of an inebriated Boris Yeltsin about the danger of expanding NATO eastward.

Looking back at history, Bill Clinton now dogmatically insists: “It is not true that we did anything to isolate, humiliate or ignore Putin. That’s the biggest load of bull you’ll ever hear.” This is the same trained lawyer who denied having sexual relations with Monica Lewinsky on the grounds, that it “all depends on what the meaning of the word ‘is’ is.”

Clinton is technically correct when he claims that he did nothing to “humiliate or ignore Putin,” who only emerged as a leader in the final 18 months of Clinton’s second term. Clinton humiliated and ignored Russia by cleverly exploiting Boris Yeltsin’s alcoholism. He accelerated policies initiated under George H.W. Bush that were designed to turn Russia into a docile annex of a kind of North Atlantic confederacy governed by Washington and its vaunted “rules-based order.” That order rested on universal acceptance of the domination of the dollar as the global reserve currency and its corollary, the petrodollar, imposed on OPEC with which Russia collaborates even if it is not a member. And the whole deal was sealed by the formal structure of NATO that implicitly cast all European countries as feudal dependencies of Washington.

Recounting his time in Moscow, William J Burns, Clinton’s ambassador to Russia and currently the director of the CIA, described “the tangled and repetitive story of post–Cold War relations between the two countries, in which troubles were never exactly foreordained, but recurred with depressing regularity.” When troubles recur with depressing regularity, at some point a wise diplomat or policymaker is likely to decide to do something rather than allow them to repeat endlessly. Therefore, Burns dutifully cabled Washington to inform the Clinton administration of the “acute sense that the West is taking advantage of Russia’s weakness.”

No – Not just Russian Imperialism Has Triggered War in Ukraine

That was a quarter of a century ago. In the meantime, NATO kept expanding. In 2008, Burns sent this message to none other than Secretary of State, Condoleezza Rice: “Ukrainian entry into NATO is the brightest of all redlines for the Russian elite (not just Putin).” Just as Rice’s ballet classes and her interest in classical piano – rather than say, John Coltrane’s Alabama – may have helped her forget about her murdered classmate in Birmingham, she seems now to have forgotten that what Burns wrote to her in 2008 literally described a failure to do “everything possible to try to integrate Russia into the international system.”

In 2006, expressing her opposition to a ceasefire on Israel’s attacks on Lebanon, Rice described the growing disorder provoked by the Bush administration’s policies in the region as the “birth pangs of a new Middle East.” The pregnancy lasted another 15 years, officially ending with President Joe Biden’s withdrawal of US troops from Afghanistan last year. Does she recognize now that the child was stillborn?

Interestingly, in her defense of past administrations, Rice cited four of the most recent American presidents: Clinton, Bush, Obama and Trump. She failed to mention the current president, Biden. Does that mean she blames him alone? Is he the one, in her mind, who has deliberately transformed integration into what is looking increasingly like disintegration of the vaunted rules-based order?