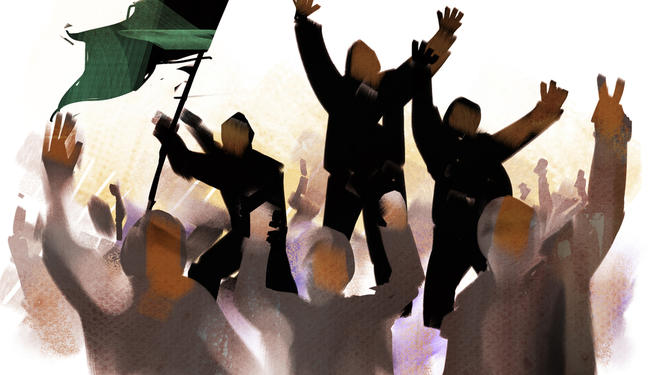 George Ayittey, president of  the Free Africa  Foundation compares the Arab Spring with  Africa’s village revolutions in the 1990s and explains what is needed to make democracy sustainable.

After the Arab Spring erupted in North Africa in the spring of 2011, there was widespread speculation that it would spread to sub-Saharan Africa. Indeed, the unrest in the Arab world sparked sporadic street protests in Angola, Burkina Faso, Cameroon, Sudan and several other African countries. But they quickly fizzled — thanks to brutal crackdowns by security forces. Actually, sub-Saharan Africa’s “Village Revolutions” in the early 1990s pre-dates the Arab Spring. But since the outcomes are strikingly similar, it would be more useful to compare the two and ascertain what lessons can be earned from them.

During the struggle against colonialism, African nationalist leaders made democracy their rallying cry and demanded its establishment across Africa. But suddenly after independence in the 1960s, the same nationalist leaders rejected democracy as a “Western institution.” Kwame Nkrumah of Ghana, for example, dismissed it as “imperialist dogma.” They then proceeded to establish Soviet-style one-party socialist state systems and declare themselves “presidents-for-life.” Statues of Marx and Lenin graced the capitals of Angola, Benin, Ethiopia, and Mozambique. In 1990, just 4 of 53 African countries were democratic.

After the collapse of the former Soviet Union in 1989, Africa’s emperors suddenly found themselves with no clothes. “Village revolutions” swept across Africa, toppling many of them. From 1990, ordinary Africans, including women with babies strapped to their backs, braved bullets and staged street demonstrations, demanding democratic pluralism and resignations of their presidents. Dictators met the protesters with tear gas, stun grenades, arrests, kidnappings, bullets and curfews. But the revolutionary ferment, which began in Benin, spread to Cape Verde Islands, Mali, Malawi, Togo, Zaire, Zambia and eventually ending in South Africa with the election of Nelson Mandela in 1994.

Only the first of the six was desirable. The rest produced a serious set-back for the democratic struggle and a descent into chaos and civil wars. Black Africa’s village revolutions were marginally successful. The number of democracies increased from 4 in 1990 to 12 in 2004 and has remains stubbornly stuck at 15 today. Africa is still not free.

A few lessons can be drawn from Africa’s Village Revolutions that can be discerned elsewhere. First, not all revolutions succeed. The Iranian 2009 Green Revolution flopped; the 2005 Cedar Revolution of Lebanon self-immolated and the flower revolutions in Eastern Europe wilted. Second, not all revolutions produce desired outcomes. They can be hijacked – as has been the case in Tunisia and Egypt, They were started by the youth but have been hijacked by senile clerics, some in exile for decades. Libya is fractured and in turmoil while the horrific slaughter of civilians by Syria’s Bashar al-Assad continues; over 60,000 dead so far. Elsewhere, a deadly stand-off has settled in Yemen and Bahrain.

Third, toppling a dictator is only the first step in establishing a free society. The next step is dismantling the dictatorship itself. It is analogous to having a bad driver with a defective vehicle. After sacking the driver, the vehicle itself must be fixed; else the new driver would land in a ditch. In far too many countries, the second step was either not attempted, debauched or manhandled, which leads to a reversal or hijacking of the revolution. Sub-Saharan or Black Africa’s village revolutions in the early 1990s, which occurred in over 40 countries, provide a treasure trove of revealing insights as to why some succeed while others fail.

Four factors determined their success or failure: The receptivity of the dictator to change; the body managing the transition; duration of the transition process; and implementation of constitutional and institutional reform.

Much bloodshed was avoided when dictators accepted the need for change and the transition was managed by a broadly representative body. For example, Benin’s 9-day “sovereign national conference” in Feb 1990 convened with 488 delegates, representing  the broad spectrum of Beninois society and elections were held in 1991. South Africa employed the same vehicle – Convention for a Democratic South Africa or CODESA – in July 1991, with 228 delegates andculminated in the election of Nelson Mandela in March 1994. [For the Arab Spring, a Grand Majlis or a Loya Jirga as was the case for Afghanistan in 2003, would be more appropriate.]

Third, a hasty transition period proved counter-productive. It took the US 13 years (1776-1789) to transition from independence to democratic rule. South Africa took three years. A short transition period – say, 6 months – does not give new parties time to organize while giving old opposition parties an edge – as occurred in Tunisia and Egypt.

Finally, after the transition a whole battery of reforms must be implemented.  Dictators manipulated the Constitution and packed all key state institutions with his supporters and cronies.  For a revolution to be sustained, the constitution must be revamped and institutions cleansed of the “nomenklatura.” Sadly, in many countries, real reforms were not implemented, allowing the return of authoritarianism: Ethiopia (under Meles Zenawi), Liberia (under Charles Taylor), Uganda (under Yoweri Museveni), Russia (under Putin), Kyrgyzstan(under Kurmanbek Bakiyev), Georgia (under Mikhail Saakashvili) and Ukraine (under Viktor Yanukovich).

In all cases, however, one lesson stands clear: Wherever the transition was managed by the military or a rebel group, the outcome was disastrous: Military dictators simply manipulated the process, created their own parties (Ghana, Uganda and Myanmar),shooed in their favorite parties (Mali, Nigeria) or “civilianized” themselves by shedding military uniforms and donning civilian clothes (Burkina Faso, Chad, Gambia, Ghana, Niger). Nigeria’s transition by its military dictators was the most egregious.

General Ibrahim Babangida began the transition in 1985. After frequent interruptions and devious maneuvers, he created exactly two parties for Nigeria in 1992 because the US has two major parties. Then he wrote their manifestoes too: “One a little to the left, the other a little to the right.” And when the June 12, 1993 presidential elections produced a winner  he did not like, he annulled the elections altogether.

Next to manage the transition was General Sani Abacha. He called a Constitutional Conference in 1994 with 396 delegates, who were “guests of the military.” A fourth of their number (96) was selected by himself.  When in 1997 he finally allowed five political parties to be registered, they all immediately chose him as their presidential candidate!

General Abdulsalam Abubakar was the next to attempt constitutional engineering but he played “hide and seek” with the exercise. For Nigeria’s 1999 transition to democracy, he had TWO Constitutions prepared and held them closely to his chest. Which to release depended upon the election results. If the results went one way, Constitution A would be released; if they went the other way, Constitution B  would be released. Thus, Nigerians went to the polls in March 1999 without knowing whether or not there was a Constitution, nor its contents.

The outlandish chicanery was matched by Myanmar’s (Burma’s) military junta of Than Shwe in 2010. The military wrote the Constitution, reserved a quarter of the seats in national and local assemblies for itself, created its own party, Union Solidary and Development Party (USDP), and blocked other parties from participating in the Nov 7, 2010 elections. Then three days before the vote, it declared “victory.” Similarly in Egypt, the Supreme Council of the Armed Forced (SCAF) so bungled the transition that street protesters are now demanding its resignation.

It is tough to start a revolution and topple a dictator. Formidable still is managing the transition and implementing reforms. Bungling either allows crocodile liberators and quack revolutionaries to take over. As Africans are wont of lamenting, “We struggle very hard to remove one cockroach from power and the next rat comes to do the same thing. Haba! (Darn!).