As usual, chaos is the word of the day in the media — this time with Donald Trump and Lionel Messi.

On the same day, June 23, Business Insider posted two articles with a headline containing the word chaos. The first one concerned the global economy: “Trump threatens to slam a massive tariff on European cars, which could cause economic chaos.”

The second one dealt with a subject even more people are interested in and passionate about: “One of the toughest World Cup groups is suddenly in chaos, and now Lionel Messi and Argentina have been thrown a lifeline to advance.”

One of the greatest gifts Donald Trump has given to the media is to produce an unending parade of situations that evoke the notion of chaos. For once, however, there is a case of impending chaos that cannot be laid at Trump’s door. He had enough to do fomenting chaos in American football when he launched his campaign to vilify black players and outlaw their kneeling on the gridiron during the ritual of flag worship.

Concerning the particular chaos in Group D in the FIFA World Cup, Trump appears to be blithely unaware as one who would surely frown on any sport that implies global participation, mutual respect among nations and, in particular, in which Mexico is emerging as a major power.

On the same day, Business Insider featured another testimony to reigning chaos: “The Brexit vote has already wiped £440 million a week from Britain’s economy.”

And on the same Saturday, though Business Insider didn’t cover it, Al Jazeera informed us not only that “Zimbabwe’s President Emmerson Mnangagwa has survived a blast at a ruling ZANU-PF party election campaign rally in the city of Bulawayo,” but also that, elsewhere in Africa, “An explosion has struck a large rally by supporters of Ethiopia’s new, reformist Prime Minister Abiy Ahmed in Addis Ababa, killing at least one person and wounding scores.”

Chaos is clearly the flavor of the day, a day on which we were also reminded of the state of permanent chaos in Iraq, where the government “says it has killed at least 45 members of the Islamic State of Iraq and the Levant.” On the other hand, the chaos has been so regular in Iraq for the past 15 years that it has begun to resemble a new kind of order.

As his wife, Desdemona, was exiting a scene in Act III, Othello famously said, “But I do love thee! And when I love thee not/ Chaos is come again.” Love is clearly the enemy of chaos and chaos the inevitable result of faded or disturbed love.

Was the European Union the UK’s Desdemona and Brexit its act of murderous jealousy, leading to a tragic Act V in which the evil Iago — who single-handedly made it all happen — still survives, though officially awaiting the state’s “censure of this hellish villain: The time, the place, the torture”?

Shakespeare put this promise of justice in the mouth of the character called Ludovico, who has no official function. Ludovico follows up his call for torture with the plea, “Oh, enforce it!” He is the voice of the average citizen who wishes to see morality enforced, but nothing tells the play’s spectators that that is what’s most likely to happen. Shakespeare leaves us with the uneasy impression that Iago, the consummate persuader, may well find a way to wangle himself out of this seemingly hopeless situation and — who knows? — even manage to endear himself to the Venetian state, appreciative (as most states would be) of his proven Machiavellian talent. Only the putative Shakespeare biographer Boris Johnson, the British foreign secretary, may know the answer to that question.

Taking a larger historical perspective, we may reach the conclusion that chaos itself has become the central feature — a kind of essential organizing principle — of a civilization that is losing its political and cultural bearings, while it invests all its hope in the dual prowess of finance and technology, expecting them to combine their forces to establish a new order or at least stabilize the old one.

We have noticed the valuable service a daily dose of chaos provides to the popular media, the unique source of all the themes people are permitted to think and talk about (mainly entertainment, personality politics, sports and consumer goods). The more chaos and confusion there is — war, financial collapse, opioid epidemics, mistreatment of immigrants, uncertainty for World Cup favorites, to name just a few — the more reason there will be to mobilize behind those who currently control the economy and its servile political system.

If, as Othello suggests, love is the enemy of chaos, love has currently been banished from the city, to the delight of those who make as well as those who report the news. 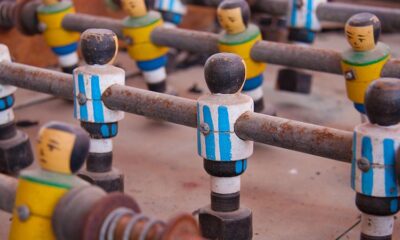 Brazil vs. Argentina: Will Football Rivals Clash Over Politics?