Tunisia’s problem with radical Islamism has been steadily brewing since the days of the Ben Ali regime.

Until now, Tunisia seemed to have escaped the worst of the violence that has beset the countries of the Arab Spring. Instead, this small nation, whose revolution for democracy and dignity sparked a wave of protest across the Arab world four years ago, looked like the only success story left.

But the shocking attack at the Bardo Museum in Tunis on March 18, which left at least 20 dead, including 17 foreign tourists, marks a profound setback to this rare democratic transition, and it may herald a new wave of violence and political crisis.

Jihadi Salafist groups have emerged in force in Tunisia since the Arab Spring, staging small-scale attacks on the military in a mountainous region near the Algerian border, a violent assault on the US Embassy in Tunis in 2012, and then high-profile assassinations of two opposition politicians, Chokri Belaid and Mohamed Brahmi, in 2013. Most worryingly, up to 3,000 young Tunisians have left to fight against the Assad regime in Syria, the largest contingents from any single country. Many joined Islamic State, while others went to the ally of al-Qaeda, Jabhat al-Nusra.

It was easy to explain all this as a side-effect from the fall of the Ben Ali regime, often described as an island of secularism in the Middle East. In the chaos that followed former President Zine el-Abidine Ben Ali’s flight, these groups rapidly took ground and flourished.

In truth, however, radical Salafism had been reemerging in Tunisia ever since the early 2000s.

For many young Tunisians, Salafism often began as a personal spiritual search, fueled by readings they found on the Internet and religious programs on Gulf satellite television channels. In some cases, the Ben Ali regime encouraged this quietist Salafism, even as it continued a two-decade crackdown on the main Islamist movement, Ennahda.

Ben Ali’s rule was never secular. Rather than trying to separate religion and state, he instead sought to monopolize control of all things religious, from dictating Friday sermons in mosques to articulating what Islam should mean to Tunisians. Yet even then, there were signs of an emerging jihadist threat. A 2002 attack on a synagogue on the island of Djerba killed 19 people, mostly tourists, and was claimed by al-Qaeda. Then in 2006-07, hundreds of young men were jailed after a failed armed assault in Suleiman. After the fall of Ben Ali in 2011, many Salafi leaders came out of jail or returned from exile abroad. In the new security vacuum, their groups flourished, appealing to young, frustrated and unemployed Tunisians who saw there would be no quick solution to the deep socioeconomic crisis that triggered the revolution in the first place. The chaos in Libya next door only served their cause.

The Islamist movement Ennahda, which won the first elections in October 2011 and led a coalition government, thought at first it could coax the more extreme Salafi elements onto a path of moderation, but later had to admit its naivety. The government blamed the two political assassinations of 2013 on the group Ansar al-Sharia and banned it; but it is still not clear who was really behind the attacks.

Eventually, Ennahda was forced out of power in January 2014, in large part because of its security failings. And since then, the situation has scarcely improved.

Groups such as al-Qaeda in the Islamic Maghreb (AQIM) continue to operate in Tunisia. Until now, the Islamic State was not thought to have made headway in the country, but it is as yet unclear whether the group played any role in inspiring or orchestrating the Bardo attack.

Tunisia’s new government, which won elections in October 2014 by promising security, will now be under pressure to launch a tough crackdown. In that spirit, Tunisian President Beji Caid Essebsi, whose party Nidaa Tounes leads the government, said after the attack: “We should mobilise the Tunisian people to get rid of [terrorists] totally.”

Even as the shootings unfolded, politicians were meeting in the historic parliament building next door, debating a new draft of the anti-terrorism law. Tunisia’s tourist industry, which is a major source of income and which was beginning to revive after the Arab Spring, will be badly affected for many seasons to come and won’t recover until the country feels much safer.

There are real risks of a slide back into authoritarianism. Until now, rival Tunisian politicians have resolved their differences and drafted a new constitution through dialogue and consensus-building. That dialogue, together with the lack of interference from a weak, apolitical military, explained the success of Tunisia’s transition.

But under the new government, a tough new tone is already being struck. Essebsi campaigned at the last elections by promising to install “respect for the state” and by frequently criticizing even the moderate Islamists of Ennahda.

His challenge now will be to provide Tunisians with the security they deserve, without resorting to the authoritarianism that is so rapidly reemerging across the countries of the Arab Spring. 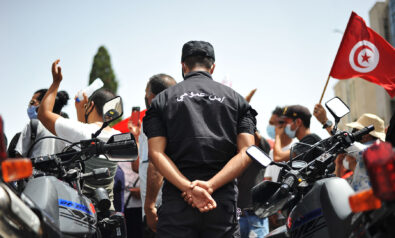