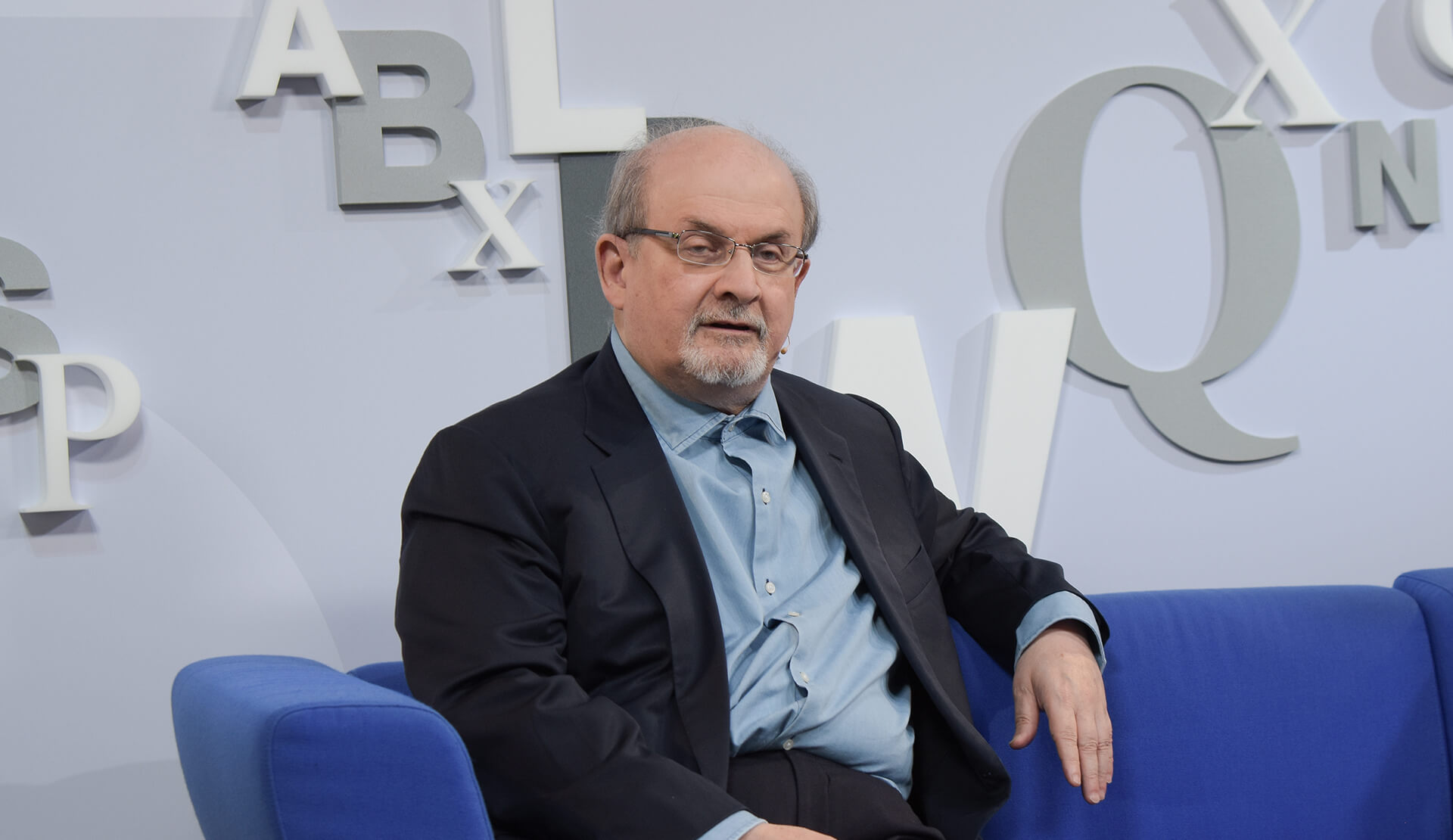 Salman Rushdie is battling for his life. He was stabbed multiple times for merely being a writer. A cartoonist in France lost his life for merely being a cartoonist. Many other writers and artists across centuries have paid the price of expressing themselves with their lives.

Intolerance is not new to humanity. After all, ancient Athens made Socrates drink hemlock. The Catholic Church did better. On 17 February 1600, a great Renaissance mind was hung upside down naked and then burnt at the stake in Rome’s Campo de’ Fiori. His name was Giordano Bruno who envisioned an infinite universe whose center was everywhere and circumference nowhere, teeming with countless stars. He was also a pantheist who believed in the transmigration of the soul. The Catholic Church saw it fit to dispatch his soul to hell and his ashes to the Tiber.

Like Bruno, Rushdie was condemned to death. Unlike Bruno, he has managed to evade death for a long time after Iran’s Ayatollah Ruhollah Khomeini issued a fatwa calling for his death. Rushdie’s editors, translators and publishers were not spared in this 1989 fatwa, In the West, even as people were celebrating the fall of the Berlin Wall and, by extension, of communism, a new menace was emerging to threaten freedom and peace.

What was Rushdie’s great sin?

Well, this Mumbai-born writer authored a book, The Satanic Verses. Apparently, this book demeaned Muhammad whom Muslims consider a prophet. Iran’s supreme religious leader thought that this was reason enough to send Rushdie to hell.

Fast forward to 2022. Rushdie was giving a talk at the Chautauqua Institution. My American friends tell me this is a magical institution. The audience gets to interact with authors. There are no elaborate security checks and people can really get to know each other. This is tragically going to change because of Hadi Matar.

The BBC reports that this 24-year-old who reportedly attacked Rushdie had read just two pages of The Satanic Verses but believed Rushdie was “someone who attacked Islam” and deserved to die. This is madness. Actually, this is not just madness, it is medieval madness.

Throughout history, a number of the most path breaking ideas have offended someone. Today, scientists and philosophers celebrate Bruno. There is a foundation in Germany by his name. Socrates is considered the father of European philosophy. Among others, the editor-in-chief of this publication is known for using the Socratic method in his instruction. Sane people would agree that the killings of the likes of Socrates and Bruno are the great human tragedies of all time.

In my view, so is the fatwa against Rushdie and his stabbing. It brings to the fore the challenge Islam faces today in an increasingly questioning, plural and multicultural world. In an article co-authored with the eminent scholar Professor Ishtiaq Ahmed, Singh has argued that “minorities are fleeing Muslim countries and radical Islamists are taking to the sword, raising a critical question about Islam’s ability to secularize.” Their thesis is validated by Matar’s murder attempt, Iranian media calling Matar’s stabbing “divine retribution” and thousands of both Shia and Sunni Muslims celebrating Rushdie’s stabbing on social media.

A case for sanity, plurality and tolerance

No two people see the world the same way. As Singh often remarks when he speaks about Fair Observer, all of us view the world through our own prisms. No two apples are exactly the same. Any two tea bushes or any two mango trees are never the same. The same holds true for any two pigeons or any two lions or any two whales. The point I am making is simple: every living or even non-living thing in this universe is unique.

Even factory-made cars, phones, refrigerators and other mass-produced goods have tiny if unobservable differences. We live and have always lived in a heterogeneous world. Yet it is also true that human beings tend to seek homogeneity. Japanese culture imposes its tea rituals, France its laïcité and, even immigrant America, a pledge of allegiance to its flag.

We will never overcome this human instinct to achieve some form of homogeneity. However, we have to accept a base level of heterogeneity. Intolerance of diversity and plurality is insanity in an increasingly globalized world of nearly 8 billion people. It could unleash violence of terrible proportions and the loss of many lives. Even more importantly, it would create a culture of fear, imprisoning minds, dampening creativity and throttling ideas.

As a deeply spiritual Indian steeped in the Upanishadic tradition, I believe in the uniqueness of all living and non-living things. It is for this reason that I go both to the heights of the Himalayas and the shores of the Indian Ocean. My ancestral land has nearly 1.4 billion people, more than 1,600 languages, over 10 religions and hundreds of ethnicities. We have lived in relative peace for centuries. Yes, independence in 1947 was accompanied by partition but there are still more Muslims in India than either Pakistan or Bangladesh, which was East Pakistan until its independence in 1971.

Some argue this is just a historical accident. They view India as a ticking time bomb where everything will blow up in some sort of mob violence if not civil war. I disagree. It is my fundamental belief that Indian philosophy with its continuous, unbroken tradition of thousands of years has extraordinary collective wisdom and valuable lessons for mature societies.

As Singh constantly points out, the Indian Shastrarth tradition is analogous to the Socratic method. India also came up with the example of sages looking within to find insights and even enlightenment. Siddhartha was one such sage who is now known and followed from Sri Lanka to Japan as the Buddha. The essence of this tradition is not adherence to a holy book, one son of god or an infallible prophet. Instead, every being is seen as unique. All of us are drops in the ocean and the ocean itself is nothing but infinite drops coming together.

If every drop of water has the right to be unique, it follows that each of us has the right to think, speak or write what we want. It follows that blasphemy could not exist in such a society because there is no reigning god or authority figure to blaspheme against. Yes, people might get offended but they would have the right to avoid the offending individual. People could agree to disagree.

In such a society, there would be no need to burn the libraries of Nalanda or blow up the statues of the Bamiyan Buddhas. Lest we forget, these were both the work of intolerant jihadis who deemed these intellectual and artistic creations blasphemous to Islam. The Turkish general Muhammad Bakhtiyar Khilji destroyed Nalanda in the 1190s AD and the Taliban destroyed the invaluable 6th century AD Bamiyan Buddhas in 2001 to the cries of Allahu Akbar.

The same intolerance that led to the slaughter of thousands of Buddhist scholars has caused both the 2015 Charlie Hebdo shooting and the 2022 Rushdie stabbing. This intolerance must end. Every individual must have infinite freedom. Freedom of expression has to be unlimited. The likes of Socrates, Bruno and Rushdie must not pay with their lives for their ideas, thoughts and works of art. Neither should anyone else.

In India, we have never had a religious authority like the Pope. There is no one holy book. The ideas of dharma, the essentially individual pursuit of righteousness, and karma, the carrying out of the dharmic action, still form the bedrock of various Indian philosophies. The idea of shishtachara where we set an example by our behavior and our lives instead of fatwa or edict has held strong in this diverse land. Such ideas prizing the individual, which Europe adopted during the Enlightenment, have limited violence in India for centuries.

In India, we have long seen things differently. I am an Ayyangar Brahmin from Tamil Nadu. We come from an ascetic, mathematical tradition. Our editor-in-chief is a Rajput with a Chandel grandmother. He comes from a more rambunctious, sensuous tradition. Yet neither of us claims or argues that our version of the dharmic or karmic tradition is what everyone must follow. Each of us is unique like any drop in this ocean of humanity. All of us have to learn to live together as per the ancient Indian idea of the world as one family: vasudhaiva kutumbukam.