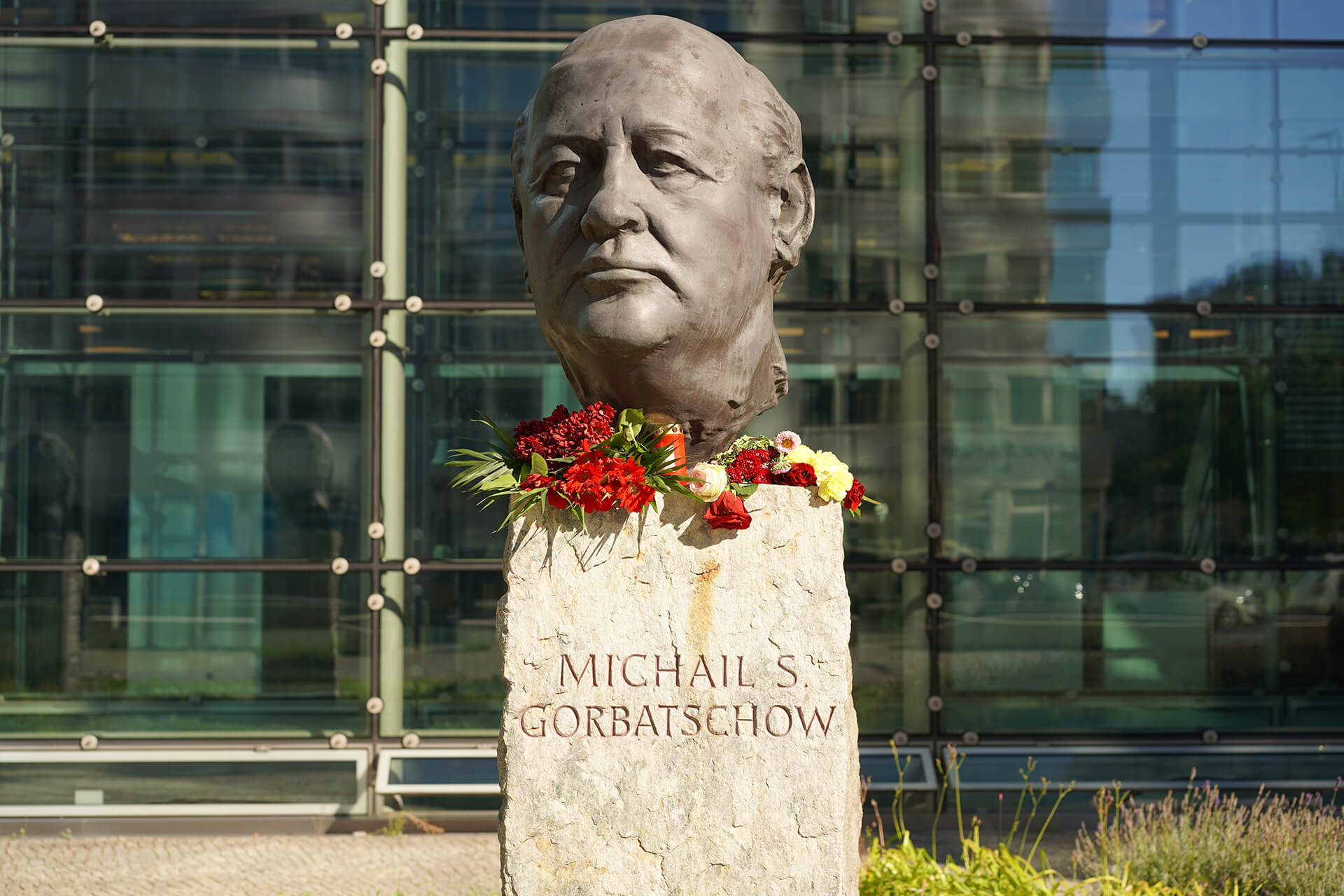 Last year in Moscow, at a performance of the play Gorbachev, the audience gave a standing ovation to the two remarkable performers who played Mikhail Gorbachev and his wife Raisa Gorbacheva. The applause became even more thunderous when the performers identified the frail old man in a box seat. A spotlight illuminated Gorbachev as he acknowledged the audience.

This was Russia before the invasion of Ukraine, when a theater festival could still feature plays obliquely critical of the Putin regime. It was also a highly selective audience: the intelligentsia that remained the only significant segment of the Russian population with a positive view of Gorbachev’s legacy.

I must confess that I, too, choked up a bit as I watched a streaming video of this performance at the Golden Mask festival along with its emotional curtain call.

A Trip Down Memory Lane

In the summer of 1985, during Gorbachev’s first year in office, I was studying Russian in Moscow. I knew little about the man. The Muscovites I encountered were generally dismissive of their new leader. He was responsible that summer for a campaign against alcohol, which earned him the nickname of Lemonade Joe. Alcoholism was indeed a serious health problem, and a drain on the economy because of absenteeism and compromised efficiency, but Gorbachev was attacking the problem in the usual, top-down Soviet way, which did not endear him to the population.

“Yes!” I said, thinking that the words meant “his citizenry.”

Everyone laughed. It actually meant “his citizenship.”

There was indeed something unorthodox, even other-worldly, about Gorbachev that, despite his initially ham-fisted attempts at reducing alcoholism, pointed toward the reforms that would transform the Soviet Union and eventually cause its demise. Gorbachev would eventually change everything—including his own citizenship, from Soviet to Russian, though involuntarily. For those changes, he would earn both a Nobel Prize and the enmity of many former Soviet citizens.

I wrote my first book on the changes that Gorbachev wrought in the Warsaw Pact and U.S.-Soviet relations. I delivered the manuscript to the publisher on November 10, 1989, the day the Berlin Wall fell. Thanks to the rapidity of the transformation Gorbachev set into motion, I had to keep revising the manuscript up to the last moment before publication. Although I blamed Gorbachev for the extra work he generated for me, I held him in high regard for the impact he was having on geopolitics.

The Measure of the Man

Mikhail Gorbachev died last week at the age of 91. Obituaries focused on his ultimately quixotic effort to reform communism by introducing elements of democracy and capitalism as well as his unpopularity within Russia and his increasingly negative view of Vladimir Putin. For his part, Putin made sure that Gorbachev didn’t get a full state funeral and then was a no-show at the event.

Thousands showed up to pay their last respects to Gorbachev. But when you see all those queuing Russians, remember that tens of thousands attended Stalin’s funeral, so many that at least a dozen people died in the press of the crowd.

No – Not just Russian Imperialism Has Triggered War in Ukraine

Many more Russians have by now forgiven Stalin his numerous crimes—only 8 percent of those polled fully disagreed that Stalin was “a great leader” in a 2021 Levada poll—because he made the Soviet Union into a superpower. Gorbachev, on the other hand, was tagged with being responsible for ending the Soviet Union. In a 2017 Levada poll, he got worse marks than the decidedly mediocre Soviet leaders Leonid Brezhnev and Yuri Andropov and was even slightly less popular than Boris Yeltsin, who presided over Russia’s economic collapse in the 1990s.

Gorbachev was not out to win a popularity contest. He knew that the Soviet system was in a shambles: economically inefficient, politically sclerotic, culturally stagnant. There was life on the margins, among dissident artists and critical intellectuals, and Gorbachev tried to bring some of that energy into the heart of the system itself by encouraging those thinkers to speak more freely. But he also possessed some of the arrogance of the Soviet elite in thinking that he could engineer an economic transformation—perestroika—with a small nucleus of reformers like himself.

Gorbachev’s myopia was further shaped by two other factors. Like many imperial politicians, he underestimated the power of nationalism, which his policy of openness—glasnost—inadvertently encouraged throughout the Soviet Union.

Ultimately, it was the demonstrators and the new, nationalist-oriented politicians in the republics who unraveled the Soviet Union. Gorbachev can be—and is—blamed by critics in Lithuania, Georgia, Azerbaijan, and Kazakhstan for the actions of Soviet troops and security forces that killed protestors in these soon-to-be countries. These deaths can’t be justified, but if Gorbachev had acted like previous Soviet leaders he would have added hundreds or even thousands of East Europeans to the death toll in an effort to maintain the Soviet empire.

“I think Gorbachev was naïve in his dealings with Ronald Reagan and the West, who were not interested in Soviet reform but in bringing down the Soviet Union,” writes Foreign Policy In Focus columnist Walden Bello. Gorbachev believed that he was on a mission and that the West appreciated and supported his efforts. He didn’t realize that, for instance, the United States wouldn’t support a Czech plan in 1990 to provide aid to the Soviet Union specifically to purchase goods from newly democratic Eastern European countries because it would provide economic support to Gorbachev.

American Myopia, Brutal Geopolitics and Lessons for the Future

The United States in particular kept waiting for Gorbachev to reveal his true colors. By the time US leaders realized that Gorbachev sincerely wanted to reform the Soviet Union rather than lull the West into complacency, it was too late. Imagine how different the world would be today if Reagan and Bush had formed an authentic partnership with Gorbachev to end the Cold War and create an equitable global order?

Vladimir Putin is doing what he can to expunge Gorbachev from the national memory. He has directly repudiated Gorbachev’s turn to the West, his experiments with democracy, and his efforts to diversify the Russian economy.

Putin is not a populist, but he knows what’s popular. He is linking his tenure to Stalin by focusing on one thing over all: the power of the state. He has consolidated as much of that power in his own hands as he can, maintaining tight control over the military and the intelligence services and turning the parliament into a vestigial institution. He has used the fist of state power to destroy what remains of an independent civil society, and he has tried to use that same fist to destroy the Ukrainian state.

Gorbachev can’t be blamed for the rise of Putin. The current Russian leader owes his position to all the missteps made by Gorbachev’s successors. But Putin’s nationalism testifies to Gorbachev’s failure to find an adequate substitute for Marxism-Leninism as a governing ideology in the Soviet Union. The Chinese leadership eventually seized on nationalism to replace communism. And so, after a fashion, has Putin. For Gorbachev, a Soviet cosmopolitan, nationalism was anathema.

In all the assessments of Gorbachev’s legacy, both positive and negative, an essential element is missing. Gorbachev’s failed attempt to transform a massive system from within has generated different take-aways for different countries. But as any scientist or entrepreneur will tell you, failure is essential to any eventually successful enterprise. Failure provides a wealth of lessons.

Lesson number one: Change can’t be forced down people’s throats, even if that change is “good for them.” Gorbachev didn’t anticipate the backlash to his reform package because he thought that everyone would welcome the medicine he was offering.

Lesson number two: Capitalism is not a set of neutral mechanisms. Unless capitalism operates within firm parameters established by the state, it will tilt the playing field in favor of the powerful. Gorbachev didn’t think far enough ahead about the impact of the market mechanisms he was unleashing in his country.

Lesson number three: One cannot assume good intentions in the arena of geopolitics. Here the Russian phrase “trust, but verify” is indeed useful. Reagan famously cited this phrase on several occasions when meeting with Soviet representatives, but it was Gorbachev who should have applied it more often in his dealings with Americans.

The world community now faces a version of the same dilemma that confronted Gorbachev in 1985: an economy that doesn’t work and a political-corporate elite that is wedded to that failing economy. How do we safely deconstruct this fossil-fuel system, which is more deeply embedded in the social fabric of everyday life than the Soviet system ever was? Top-down, market-driven, and geopolitically naïve “solutions” will not ultimately help us any more than they helped Gorbachev.

As we struggle to address the current climate emergency, Gorbachev’s failures will continue to be his gift to us and future generations.

[This article was originally published by FPIF.]