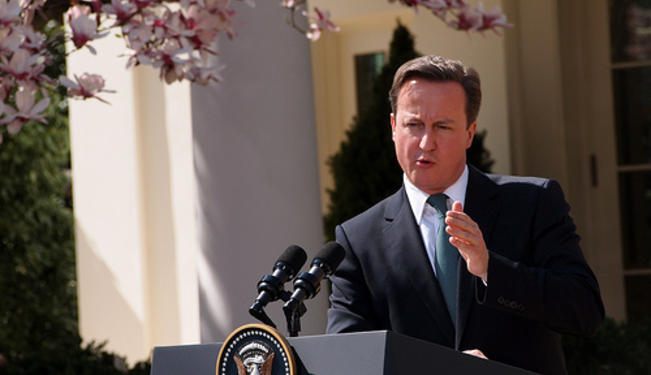 Why the US is reaffirming its ties to the UK.

Washington, DC’s grand, neo-classical Pennsylvania Avenue is festooned with Union Jacks and star-spangled banners. The pomp heralding the arrival of British Prime Minister David Cameron for his March 13-15 visit to the US, his second and more high-profile official visit since assuming office in 2010, is breathtaking. The British foreign office has long placed the primacy of the relationship with the US at the top of its strategic interests. Now the feeling is clearly mutual.

Anyone interested in deciphering the Obama administration’s world view need look no further than its state-dinner diplomacy to see London’s place in the hierarchy of Washington’s global partners. Since coming to office, Obama has hosted five state dinners – for leaders from India, Mexico, China, Germany and, now, the UK. Taken together, these occasions offer a mapping of the administration’s preferred, or at least presumed, international interlocutors. For the US, the UK is one of these undisputed pivot points.

Mitt Romney’s campaign team has placed the US’s neglect of the British as the centerpiece of its critique of Obama’s Europe policy. In an attempt to profile its policy muscle, the campaign published a white paper covering the broad strokes of a Romney foreign policy. The paper failed to mention the EU or NATO once. Nor did it include Europe’s economic troubles. It did, however, contain a bizarrely anachronistic pledge to restore the special relationship with the UK. Demonstrating little let-up in this line, a top Romney foreign-policy advisor stated this week that the US-UK relationship in the era of George W. Bush was a “much more equal partnership”. This observation would come as a surprise to most Brits who saw that relationship as profoundly asymmetric. Images of a highly coiffed canine come to mind.

To avoid being dogged with similar criticism, Obama and Cameron penned a joint piece last May in The Times (London) that coined the term “indispensable relationship”. They recognized that in a changing world a changing bilateral relationship does not diminish its importance. And precisely because the US-UK relationship is so robust, it sometimes proves unwieldy. The US, after all, relies on the UK in three areas: as a guardian of security, as a partner in global economic governance and for its place in the EU.

In a bookend to their Times piece, the two leaders opened their Washington get-together with a weighty op-ed on foreign and security policy in The Washington Post that reflects the close cooperation on security issues. Their agenda this week also confirms this relationship. Successes in Libya and its lessons for NATO’s future, timetables for withdrawal from Afghanistan, intensified engagement in Syria, combating piracy on the high seas, and the escalating danger of Iran’s progress towards nuclear weapons-grade uranium enrichment are all highlights of their talks. The re-emergence of the Falkland Islands dispute is also likely to come up.

But the leaders should not forget the other two nodes of US-UK relationship.

Washington and London see eye to eye on global economic governance. The breakdown of G20 coalitions over the past three years – be it on global current-account imbalances, financial-market regulation, currency manipulation or free trade – reveals that the two capitals are on the same side of these issues, often with other European countries galvanizing the opposition. But Cameron’s approach to the UK’s budget woes – balancing spending cuts with targeted tax increases – reflects a more deliberative process than that currently taking place in the US. Britain’s willingness to have budget talks that encompass all areas of spending, from defense to health care to pensions, offers an example to obstreperous Democrats and Republicans. Lastly, shared legal traditions and industrial interests mean the UK could serve as the key broker in the deeper trans-Atlantic economic integration. This could even lead to a Trans-Atlantic Free Trade Agreement (TAFTA) in the coming years.

Regarding the EU, the US national interest is keeping the UK in core Europe. The British lead the call to imbue euro zone crisis management with an emphasis on economic growth, a position that was undoubtedly met with nods of affirmation in the US Treasury, not to mention the International Monetary Fund. The UK’s ambivalence to an EU financial-transaction tax also reflects Washington’s economic interests. Finally, the UK is among the staunchest supporters of the EU-US Passenger Name Record (PNR) Agreement, which homeland-security experts see as vital to maintaining safe and open visa-free travel between the US and much of Europe.

Obama’s message to Cameron should be that the UK should continue to maintain its place in the Euro-Atlantic community. That place, however, begins with London’s role in Europe. The US can leverage its relationship with the UK only in so far as the British maximize their influence in the EU. And only Washington has the gravitas to deliver that message.

*[This article was originally published by The Bertelsmann Foundation.]