Across America, people are coming out in hordes to protest the death of an unarmed black man, George Floyd, at the knee of a white policeman, Derek Chauvin, in Minneapolis, Minnesota. Chauvin choked Floyd with his vicious stranglehold, pressing his knee against Floyd’s neck for an interminable eight minutes and 46 seconds, even as Floyd pleaded that he can’t breathe. Two other police officers, J. Alexander Keung and Thomas Lane, held Floyd down, while a fourth police officer, Tou Thao, stood by watching. All four police officers were fired from their jobs the day after the incident, but it took the twin cities of Minneapolis and Saint Paul erupting in flames before Chauvin was arrested and charged with Floyd’s murder.

Chauvin appeared to be posing for a trophy hunter photo even as a human being’s life was being slowly snuffed out. Chauvin’s training should have taught him that eight minutes is ample time to strangle a person to death. I wonder what went through the policeman’s mind during that time. A sense of unassailable superiority? Unmitigated racial hatred? Without a modicum of doubt, Chauvin had plenty of time to consider the consequences of his actions. Yet Chauvin has been charged with third-degree murder and second-degree manslaughter, setting up the farce of a judicial system that will play out in the white cop’s favor in due course.

The Murder of Ahmaud Arbery Is an Echo of Slave Patrols

The inhuman brutality of Chauvin’s actions has sparked fierce anger, resulting in protests across the country — and beyond. In what is likely to be a watershed moment for police brutality and racism in America, the reaction to Floyd’s death and its aftermath by people and elected officials alike is putting everyone’s true colors on public display.

Instead of demonstrating the poise and statesmanship the situation demands, America’s racist president, Donald Trump, tweeted: “Great job last night at the White House by the US @SecretService. They were not only totally professional, but very cool. I was inside, watched every move, and couldn’t have felt more safe.” While cities across America went up in flames, and demonstrators — and the media covering the protests — were being tear-gassed, blinded with rubber bullets and rammed with police vehicles, the best its cowardly leader could come up with was to share how safe and protected he felt.

Not all leaders have reacted in the frivolous way Trump characteristically does. In California, San Jose Mayor Sam Liccardo commented that “Anger and peaceful protest will always be appropriate responses to injustice; violence will never be. San Jose is united in outrage over the atrocious crime committed in Minneapolis and in sadness over George Floyd’s horrible death.” Liccardo’s comment typifies the response from elected officials across the country facing angry protesters. They express sadness over the “horrible death” of George Floyd but stop short of calling his death a murder — which, in my opinion, it was, committed in broad daylight. Atlanta’s Police Chief Erika Shields, Atlanta Mayor Keisha Lance Bottoms and Merylin Mosby, the prosecutor on the Freddie Gray case, all seem to agree on this, with the lawyer for the Floyd family calling the murder “premeditated.”

In an emotional speech asking the protesters to go home, Bottoms lamented: “This is not in the spirit of Martin Luther King Jr., this is chaos. A protest has purpose. When Dr. King was assassinated, we didn’t do this to our city.” The riots following King’s assassination in 1968 spared the city of Atlanta, but America did witness unprecedented social unrest, particularly in Washington DC, Baltimore, Chicago and Kansas City.

Bottoms’ plea to spare her city from violence and property damage is understandable from her position as mayor. But she fails to see that the protests happening today do have a purpose, even if it is not in the spirit of non-violence advocated by Dr. King. Floyd’s murder is the straw that broke the camel’s back for black people thirsting for justice denied to them over decades. For Rodney King, savagely beaten in 1991. For Trayvon Martin, shot in 2012. For Eric Garner, strangled, and Michael Brown, shot, in 2014. For Philando Castile and Alton Sterling, shot in 2016. For Ahmaud Arbery, killed earlier this year. For the countless black lives lost at the hands of white policemen and vigilantes.

Ex-cop Gregory McMichael and his son Travis were only charged with Arbery’s murder following a public outcry. George Zimmerman, a self-styled vigilante, was acquitted of murdering Martin following a trial. Darren Wilson, an officer at the Ferguson Police Department, was not even indicted in connection with Brown’s death. In a case that bears a striking resemblance to Floyd’s last moments, New York Police Department’s Daniel Pantaleo was also not charged with fatally choking Garner. The four Los Angeles Police Department officers who mercilessly beat King to near death — Laurence Powell, Timothy Wind, Theodore Briseno and Stacey Koon — were all acquitted following a trial.

The list of black people who have died unfairly at the hands of the police and justice denied to them in the subsequent legal process is endlessly long. According to The Washington Post database, police shot and killed 107 unarmed black men and women since January 2015, when the newspaper started tracking every fatal shooting by an on-duty police officer. A study by Mapping Police Violence, which uses a broader definition for police killing, has identified that in 2015 alone, 104 unarmed black men and women were killed by police across the nation.

Only a meager five of those officers have been convicted, each serving out a laughable sentence amounting to nothing more than a slap on the wrist. With an incredibly low conviction rate and extraordinarily lenient sentencing, it is no wonder that officers like Chauvin, Wilson, Pantaleo and Thao act with impunity in the name of law enforcement.

White men instituted the concept of policing for their own protection and controlling the minorities in the early 19th century. Even 200 years after its inception, that institution has failed to evolve in a fashion that treats all human beings in a fair and just manner. African Americans may not be slaves to white men today, but this has not made them equal. Certainly not in the eyes of law enforcement and white people whose vision is clouded by racism.

Behavioral change in policing is a key aspect of the much-discussed criminal justice reform. A shift in police behavior cannot happen when they are trained to use lethal force against individuals perceived to be dangerous. Systemically flawed police training, coupled with the ingrained racial bias against black people, invariably results in deadly consequences for African Americans. Of the more than a thousand people shot dead by police each year, black Americans are killed at more than two times the rate of white Americans.

A white person enjoys the privilege of being innocent until proven guilty. In the eyes of law enforcement, black people are regarded as guilty until they prove their innocence. Presumed guilty, more often than not, black people do not get a chance to prove their innocence when faced with unreasonable and deadly force at the hands of police. The protests and riots that are engulfing the entire nation today are a result of centuries of injustice meted out to black people. The longer America ignores the cries of its black citizens, the stronger the flames will burn. 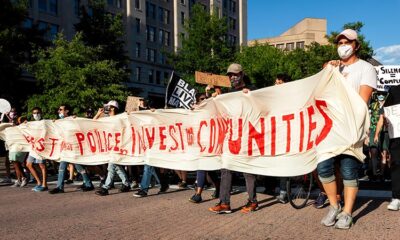 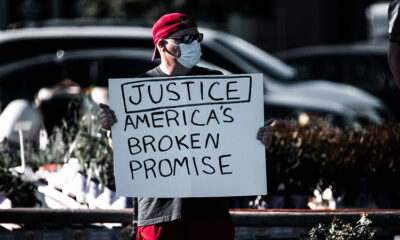 America Faces Its Past With Eyes Wide Open 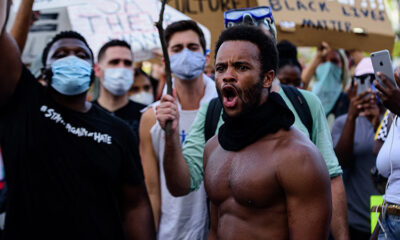 The Tyranny of Algorithmic Order in Times of Revolutionary Change