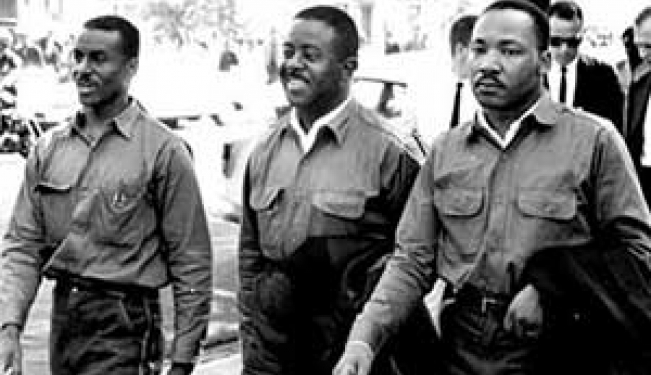 A commentary on the contributions of Fred Shuttlesworth to the civil rights movement and beyond.

Reverend Fred Shuttlesworth died as he had lived, fighting strongly yet always in the shadows. His death on October 5, 2011 was not only overshadowed by the passing of another transformational American icon, Apple founder Steve Jobs, but was also later overshadowed by the celebration of the unveiling of the Martin Luther King Memorial in Washington on October 16, a scene that is reminiscent of his confrontations with the charismatic civil rights leader.But those who knew Reverend Shuttlesworth say he was not out for recognition, and preferred to play the part of courageous warrior for the civil rights movement.

Yet, it was this blunt-talking preacher who braved beatings, bombings, and fire-hosings to propel the town of Birmingham, Ala., to become a beacon of the civil rights movement. In a magazine article in 1988, he famously declared his desire to shatter the walls of segregation in Birmingham and throughout the South, even if it cost him his life:  “I tried to widow my wife and my children for God`s sake, because I literally believed that scripture that says `…whosoever will lose his life for my sake shall find it.` I had no fear, you understand.”

Many prominent African Americans believe that without Shuttlesworth, the civil rights movement would not have achieved as much. In fact, although not a household name, Shuttlesworth was as important to the movement as King was, acting as one of the two major axes of the Southern Christian Leadership Conference (SCLC).  He led the campaign to desegregate Birmingham long before the arrival of King and was instrumental in bringing him to the city, which along with the town of Selma provided a backbone for the civil rights struggle.  Despite being allies, there was a difference between Shuttlesworth and King, the former being a proponent for direct action and pushing towards confrontation and the latter being perceived as more conciliatory and someone who could better collaborate with white Americans.  Nevertheless, the two of them together formed a dialectic that drove the movement forward.

Shuttlesworth's efforts were not without a price.  By his own count, Shuttlesworth had been bombed twice, beaten into unconsciousness, and jailed more than 35 times.On Christmas night in 1956, Shuttlesworth was laying plans to lead a group into the white sections of buses, when approximately 15 sticks of dynamite exploded outside the parsonage. The blast destroyed his humble quarters, but he emerged unscathed. The next day he led 200 people onto Birmingham's buses.

With the bombing of the 16th Street Church by the Ku Klux Klan and the unleashing of police dogs and firehoses on demonstrators, the civil rights movement gained international prominence. The events led to the passage of the Civil Rights Act of 1964 and the Voting Rights Act of 1965 after the historic Alabama marches from Selma to Montgomery that year that Shuttlesworth also helped organize. These laws were the bedrock of civil rights legislation.

I never had the honor of meeting Shuttlesworth, but a few weeks ago, I visited Birmingham, Ala., and the Birmingham Civil Rights Institute (BCRI), where I encountered his story through people who had worked and marched with him and King. For me, as an outsider and non-American, the focus has always been on the legacy of King.  This is what we are taught and this is what the media tends to portray. Yet as I learned more about the civil rights movement, I began to appreciate that the perseverance of the fight was due in part to Shuttlesworth’s humility. Despite being in the shadows, he remained determined to break through the barriers.

The story of the civil rights movement is characterized by the stories of individuals such as Rosa Parks, Myrna Jackson, King, and Shuttlesworth, all of whom sacrificed personal freedoms and privileges at great risk to their lives in order to improve the common good.

The story of Shuttlesworth in particular is one of a single man who stood up for principled change and persevered, in spite of the lack of public awareness.  This lack of public recognition has since been rectified as his name is immortalized in Birmingham. A street is named in his honor, a statue of him stands in front of the BCRI, and three years ago, the airport was renamed the Birmingham-Shuttlesworth International Airport.

Shuttlesworth was the last of the civil rights movement's “Big Three,” alongside King and Reverend Ralph David Abernathy. His passing symbolizes the closure of a certain chapter of the movement, but by no means marks its end.

Since the 1960s, America has made enormous progress with regards to human rights, but there is still much to be done.  The civil rights movement has new challenges to overcome, especially given the rise of anti-immigrant rhetoric and Islamaphobic sentiments.  In addition, current international struggles, such as  the Arab Spring and “Occupy” protests, are a testimony to the notion that the movement of people for civil rights and social justice is not dead, but perhaps has evolved into a different form.  With the added advantage of social media, the movements now have the unprecedented ability to recruit and capture attention and mobilize for change more effectively than before.

Current protagonists would do well to look at the life stories of people like Shuttlesworth to understand not only the true sacrifices that are needed for success but also the humility and attitude in which to conduct their actions. What these stories teach us is that not only can change come from a single man, but also from individuals working together, striving to make a change collectively.  This has to be done regardless of personal glory or ego. Ultimately, the ideal world is  one in which we connect with other people, often beyond our immediate communities, and work together towards a single goal of fulfillment and well-being in an atmosphere of peace, compassion, and justice.