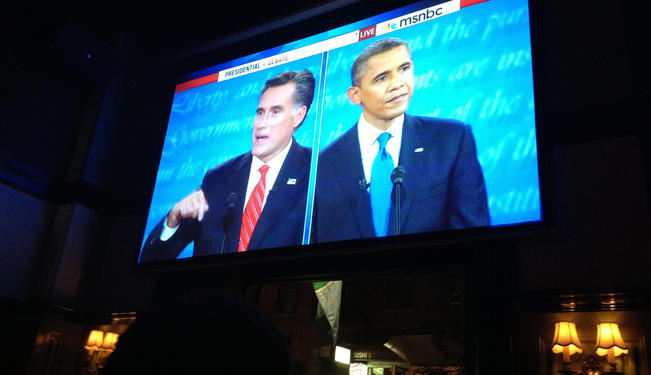 In the presidential campaign, American foreign policy towards the Middle East has overshadowed other regions by far – underlining considerable differences between each candidate’s approach to this part of the world.

Issues in the Middle East with global significance are developing by the day. Recent events, like the violent protests in Libya and Egypt, Iran’s growing nuclear program and massacres in Syria have brought the US presidential candidates’ respective foreign policies, a fringe issue thus far in the 2012 election, to the forefront. In the presidential campaign and debate American foreign policy towards the Middle East has overshadowed other regions by far.

In Barack Obama’s speech in Cairo in June of 2009, he preached co-existence and reconciliation, raising expectations that US foreign policy would change in the Middle East, but quietly embracing pro-American autocratic rulers like President Hosni Mubarak of Egypt. While Obama voiced his preference for open governments, it was only after the tide had clearly turned during the Arab Uprisings in countries like Tunisia and Egypt that Obama implicitly called for a change of ruler. Obama’s foreign policy, especially towards the Middle East, cares less about consistency and more about successful outcomes and maximizing American bargaining power. In contrast with his predecessor, who relied on unilateral force to engineer change in the Middle East, Obama relies on practical considerations, consensus building, and a diversity of views from his foreign policy team. He is a realist par excellence, from a dominant tradition in US foreign policy.

A Mitt Romney administration, according to Republican sources, would embrace the most hawkish of George W. Bush’s “freedom agenda” interventionists, particularly in the Middle East. He has assembled a team of neo-con hardliners as advisors and potential appointees in a Romney administration that as encouraged more aggressive foreign policy positions, criticizing the Obama administration for being “at the mercy of events, rather than shaping events.” On Libya, Syria, Iran, the Palestinian-Israeli issue and al-Qaeda, it became increasingly clear to those who have been following Romney's positions over the last year-and-a-half that he has changed his positions almost wholesale in the last weeks and has essentially come to mimic Obama’s positions in foreign policy. Where Romney differs is that he plays on the emotions of Americans who fear terrorism and he tends to provide misleading analyses of complex international issues and their root causes (some of which land squarely on Bush-era politics and the anti-Americanism it fuelled). To elect Romney as President of the United States, given his simplistic views of the world’s nuances and the neo-con aides on whom he relies, would not only be a detriment to America’s vital interests but also to the global village as a whole.

Romney has been blunt in his support for Israel and disapproving of Obama’s alleged indecisiveness and failure to adequately protect Israel from Iran’s development of a nuclear weapon. Obama has favored acting through diplomacy where Romney aides have implicitly suggested that he would support an Israeli strike on Iran. Israeli Prime Minister Benjamin Netanyahu and Romney have had a good relationship due to Romney’s open support of Netanyahu’s hard-line views.

Netanyahu has continuously pushed Obama to be more aggressive in his stance towards Iran. However, as the polls have started to point towards an Obama reelection, Netanyahu has softened his previously aggressive rhetoric towards the president as his recent speech at the UN General Assembly showed. To call Obama’s position towards Iran and his policies in the greater Middle East “appeasement” is patently false. His opponent is either posturing for political advantage or engaging in policies that would border on reckless endangerment. Obama has successfully built a comprehensive international coalition which imposed one of the harshest sanctions regimes on Iran in history. He is waging a war-by-other-means against the Islamic Republic, a war that has exacted a heavy toll on the Iranian economy. Short of military attacks, there is little else that Obama can do to force Iran to change its conduct.

While Romney has criticized Obama for his dealings with Syria, the GOP candidate has not provided specifics of how to deal with the crisis himself, except promising to indirectly provide the rebels with heavy weapons. However, US officials fear that providing arms to the rebels might fall into extremist hands.

Romney initially criticized Obama for being “tentative, indecisive, timid and nuanced.” When Obama authorized limited US military action, Romney then decided Obama had acted hastily. And when American forces helped remove Libyan dictator Muammar Qaddafi, Romney was first wary, then supportive. With the killing of four diplomatic officials in September, including US Ambassador to Libya Christopher Stevens, Romney seized the opportunity to criticize Obama’s handling of the situation as apologetic and “disgraceful,” without providing evidence to substantiate his charge.

With questions about the influence of the anti-Islam film “The Innocence of Muslims” circulating, the debate surrounding possible limits on free speech when dealing with sensitive issues such as religion has also heated up. Obama reiterated the significance of uncensored free speech in his UN General Assembly speech.

The new report out by Stanford and NYU investigating the impact of drone strikes in Pakistan contains scathing criticism of the Obama administration’s use of drones, their terrorizing effect and simultaneous ability to increase the terror threat. Romney has been largely silent on the issue. Romney has also accused Obama of tipping his hand to the Taliban by announcing a timeline for withdrawal of US troops from Afghanistan, but also says he accepts the 2014 timeline.

What to Watch For

As we watch the election unfold, we would do well to remember that a candidate seeking votes often has a very different perspective once in the Oval Office. President Obama, for his part, campaigned against many of the national security initiatives of his predecessor while in reality being slow to end Bush’s 9/11 wars and scars, including closing the US military prison at Guantanamo Bay and swiftly bringing US troops home.

With American troops soon out of Afghanistan (they already exited Iraq), the Obama administration is well positioned to play a key role in assisting Arab countries to transition to democracy, a good that has been a low key priority on the US foreign policy agenda. Washington should keep a sense of balance and perspective, with no knee-jerk reactions, as the Arab masses freed from years of oppressive control find their voice. Maintaining economic and political cooperation with appreciation of the sensitivities of new nationalism and identity politics is key to transforming US-Arab relations from suspicion and hostility to cooperation. The test of Obama’s presidency if he is re-elected is whether or not he can realign US foreign policy with progressive and democratic voices in the region, making a structural investment in improving people’s lives, an investment on which a few people in the region bank.

*[This article was originally published in the independent online magazine openDemocracy on October 26, 2012].