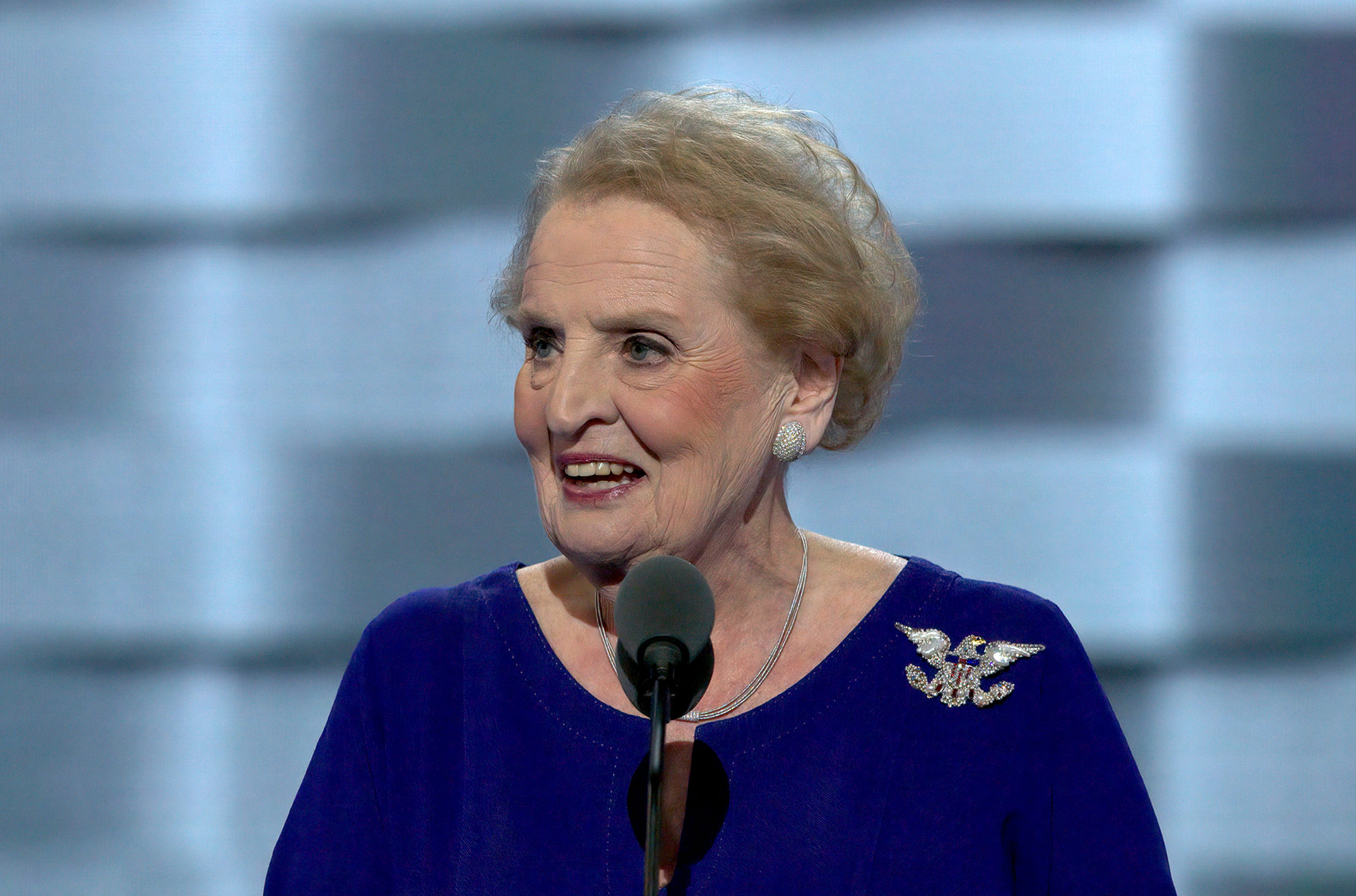 When she was President Bill Clinton’s ambassador to the UN just before being promoted to secretary of state, Madeleine Albright famously shared her understanding of how the US commitment to Woodrow Wilson’s motto of keeping the world safe for democracy could play out in real time. In a 1996 interview, CBS journalist Lesley Stahl expressed her concern about the effect of US sanctions on Iraq: “We have heard that half a million children have died. I mean, that is more children than died in Hiroshima. And, you know, is the price worth it?” Albright unhesitatingly replied: “I think that is a very hard choice, but the price, we think, the price is worth it.”

Twenty-five years later, Albright is a private citizen with no stake in the political or geopolitical game other than selling her services through her firm, Albright Stonebridge Group, as a high-price consultant in international strategy. Her firm describes itself as a “commercial diplomacy firm” bringing together a “team of commercial diplomats,” at least four of whom are hired out to the Biden administration, including Albright herself.

On the strength of her past experience of making “hard choices” — which at the time tended to be particularly hard on Iraqi children — Albright now wants to help not just her clients, but also the general public understand the choices that are now facing the US and the world at a moment of history in which democracy itself appears to be threatened.

In an article for Foreign Affairs with the title, “The Coming Democratic Revival,” Albright insists that there has been a reassuring continuity in US foreign policy over the last three decades. “Historically,” she writes, “the republic’s claim on the global imagination has been inseparable from its identity—however imperfectly embodied—as a champion of human freedom, which remains a universal aspiration. The more disturbing events of the twenty-first century, for all their complications, have dented, but not destroyed, what remains a unique foreign policy asset.”

As a former board member of the New York Stock Exchange, Albright knows something about assets. As a former diplomat, she understands that rhetoric or the science of linguistic formulation is nine-tenths of that job. Competent diplomats, to cite the Hollywood cliché, speak with a forked tongue. They know how to formulate their comments and intentions in such a way that other political professionals — whether friends or foes — clearly understand the intimidation, bribery or threat they convey. The same words, transmitted by the media, will appear as an expression of constructive goodwill and a commitment to morally sound principles.

Albright demonstrates her rhetorical skill in the article with sentences such as this one: “The United States still has immense resources it can deploy for purposes that serve both its immediate needs and its enduring ideals.” For the media and its public, this simply expresses a reassuring commitment to the ideals it cites. Diplomats and foreign leaders will more likely translate it thus: Despite its apparent decline, the United States has a formidable military machine and will not hesitate to mobilize its resources along with its economic power to counter any initiatives that fail to conform to its hegemonic intentions.

Albright economically avoids the embarrassing idea of admitting decline by inserting the word “still.” Claiming that the US “still has immense resources” implicitly acknowledges the fact that those resources are either diminishing or have had little positive effect on instilling democracy in the places they have recently been deployed. As secretary of state, in a television interview in 1998, Albright famously said: “But if we have to use force, it is because we are America; we are the indispensable nation. We stand tall and we see further than other countries into the future, and we see the danger here to all of us. I know that the American men and women in uniform are always prepared to sacrifice for freedom, democracy and the American way of life.”

It is far from clear how a nation can “see further than other countries into the future,” since nations are not organisms with eyes. And even living organisms can only see the present. But her point is once again about the power to influence the future by virtue of sheer military might. This certainly appeared to be true in the waning years of the 20th century, but it has since lost some of its sheen.

One of the wonderful advantages for people like Albright, who promote democracy and forecast its revival, is that they feel no obligation to define what it is or analyze its workings. That is unfortunate, if only because many people — possibly a majority in the US — appear confused about whether their nation is still a democracy. Voices of authority such as Albright’s should be making an effort to define what democracy means before promoting it like a commercial product.

This is especially true in a world where everything that concerns electoral processes is in a state of ever-increasing confusion. Who votes? Who has the right to vote? How are the candidates selected? Do the parties that select them represent the populations they appeal to or merely the elite that runs the parties or the donors that finance campaigns? Does the media play the role expected in a democracy, which should consist of informing the public rather than manipulating its beliefs or, worse, simply entertaining by reducing elections to horse races?

None of these questions seem to interest Albright. On the other hand, she is absolutely right when she says that “most people want to strengthen, not discard, their democratic systems” and cites the German scholar Christian Welzel, who estimates that “support for democracy … remains steady overall at roughly 75 percent.” But, even while asserting this fact, Albright shows no interest in what it might mean to “strengthen” democracy.

Madeleine Albright believes not only in the stable continuity of US foreign policy from Bill Clinton to Joe Biden and the fact that it survived hurricane Donald, she believes that it is anchored in history. Acknowledging the troubled state of political debate in the US today, she wants her audience to believe it is still all about fulfilling the role of “the indispensable nation” that not only protects its privileges but guides the history of humanity. “With the United States confronted by partisan divisions at home and fierce adversaries abroad,” she writes, “these critics assert that U.S. leaders can no longer afford to indulge in Lincolnesque fantasies about democracy as the last best hope on earth.”

This mythological representation of the nation’s vocation as “the last best hope on earth” places the US not only at the forefront of history, but beyond history itself. It paints a picture of the rest of humanity as a rudderless magma of confused populations, individuals, governments and cultural groupings devoid of hope. It would be one thing if Albright simply flaunted the idea of the US being the best hope — meaning there might be competition — but calling it the “last” best hope literally insults the rest of humanity. That’s why it can be worth it when half a million of humanity’s children die.

In April, the Harvard Youth poll announced this fact: “More than half of young Americans are going through an extended period of feeling ‘down, depressed or hopeless’ in recent weeks.” Was it simply because they hadn’t yet had the chance to read Albright’s article?