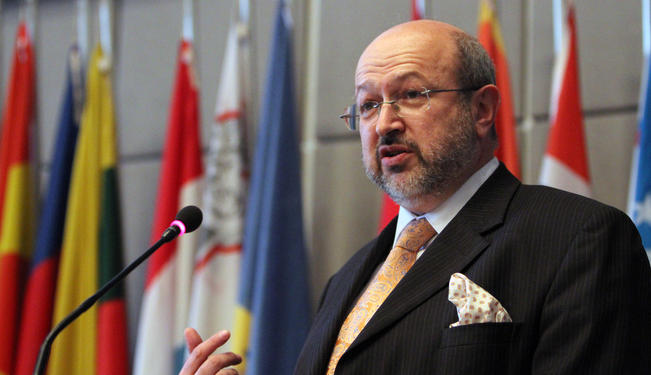 Gregor Konzack interviewed Lamberto Zannier, Secretary General of the Organization for Security and Co-operation in Europe (OSCE), at the Munich Security Conference. Mr. Zannier speaks about the need for organisations like the OSCE, NATO-Russia relations and what needs to be done to solve protracting conflicts in the world.

Q – Can the OSCE have a positive impact on NATO-Russia relations? You as Secretary General of the OSCE will definitely have a response to this comment by Natalia Burlinova.

The OSCE works in a mode that is very comprehensive in terms of the agenda: we put together security issues, confidence building measures, disarmament issues, economic cooperation, issues relating to human rights and assistance to the democratisation processes. We work at different levels. Firstly, with individuals to promote human rights and the dignity of the individual within society. Secondly, at the level of states, interstate relations and at the regional level.

The OSCE has developed a concept that is very much present at this conference today. This is the concept of a security community that looks at the transatlantic, the Eurasian and at the Mediterranean perspective. What is important, is working with a society; preventing conflicts, possibly solving protracting conflicts or keeping them under control. We do this relatively low key, so there is an issue of visibility. In that sense I can understand the assumption that the OSCE is dead.

Nevertheless, my argument is that the importance of our role remains. This refers back to a comment by the German Foreign Minister: we do not need new institutions, but we need to use the ones we have best. The OSCE has developed the concept of a security community, but we need to articulate it better, perhaps refine it and add new tools.

The conference points to a number of challenges that need tackling. Cyber security, to mention one, is emerging and we are equipping ourselves better to deal with global trends. The OSCE is doing it in a way that is a pretty sharp change from the past. We still have a culture inherited from the Cold War Era, of viewing security as a zero-sum game. Now, security can be a win-win game for everybody, as we join forces to combat the same challenges that face all of us.

Q – Do you think new threats like cyber criminality and terrorism create more commonalities between Russia and NATO?

A – This is another reason why we need a complex institutional set-up. NATO is always developing its own policies in a mode that is like-minded among its members. When NATO deals with Russia it is a negotiation and they try to find a common ground. In the OSCE we have a different approach. We are by definition a community of countries (including some NATO countries, Russia, and a number of others) that have different objectives and their own conflicts. So you have a multiplicity of sensitivities and political objectives. We also operate in a different way to try to find the common denominators and priorities and try to develop policies that affect everybody the same way.

So, in a way we are broader than NATO-Russia. The OSCE can support the progress and dialogue between Russia and NATO by building confidence in the area, for instance. There are obviously issues on that agenda though, that will have to remain in the context.

Q – So you are suggesting the OSCE can take on a mediating role to find common ground and common denominators because of its past experience?

A – We do that already in certain respects, in relation to the protracting conflicts, whether it is Nagorno-Karabakh or Moldova. We also intervene in early warning mode like we did in Kyrgyzstan last year. We are now looking at a more strategic way of positioning ourselves in Central Asia to address security challenges stemming from Afghanistan, in order to preserve stability in Central Asia and export that stability into Afghanistan.

All the Central Asian states are part of the OSCE and we are present in all those countries. Therefore, we can work with them in a different way than the European Union or NATO can because they are not members of one or the other, whereas they are members of the OSCE. So the OSCE has an advantage in certain areas, we have a different profile and we do not have a political agenda that is perceived as potentially interfering with the objectives of the countries themselves. Each country takes part in designing the agenda of the OSCE.

Q – There will be more engagement of China in Central Asia, be it through pipelines or population migration. As China is not part of the OSCE, how can an early warning system for conflict prevention be embedded?

A – There are many actors in Central Asia. We are the Euro-Atlantic and Eurasian organization and when it comes to conflicts stemming from Afghanistan it is not only China, it is also India, Pakistan and Iran. The neighbourhood is very composite and complex. So we will work from our angle, but we are also in contact with organizations like the Shanghai Cooperation Organisation based in Beijing, which is working on programs in Central Asia.

I think when you address complex problems such as the long-term stability of Afghanistan, you really need the international community to cooperate because there is no single actor, neither national nor international, who can make a difference. We need a convergence and a sense of an agreed strategy.

Q – Yes, it is necessary for the international community to stand together in times of crisis. The more it comes as a surprise that NATO is pushing forward the project for the missile shield, which is perceived as a threat in Russia. So when you are aiming at a common security architecture, this must be a major obstacle for your work in the OSCE. What do you think NATO could offer Russia to join this security architecture?

A – Well, I do not see the two things depending on each other. There is a dialogue between NATO and Russia on missile defence. It is my hope that this dialogue will continue positively and will contribute to create this climate of trust that we want to establish.

There are many other examples of difficulties that we are facing. I was in Kosovo heading the UN operation there and it is an issue that remains on the agenda of many organizations like the UN, the European Union and the OSCE. Obviously there is a challenge in front of us and that is also what motivates us to engage and to reform, in order to be more effective.

Q – Do you think the new military strategy of the US refocusing on the Pacific improves the level of trust between Europe and Russia – because there is less American involvement in Europe?

Something we do in the OSCE is every now and then seminars on military operations. So there is change, there is transparency at the strategic level between the countries. We need to make sure that everybody understands what the plans of everybody else are and shifting attention from one theatre to another in itself is not destabilizing as long as it is public and well explained. So I don't think this will have necessarily an impact of any kind.

A – The issue of ECHR influence is for every country to develop. What matters for us is the commitment the members of the OSCE family have made – which is the Helsinki commitments and a whole set of norms that have been developed over time. So certainly the engagement of the organisation will continue, regardless of alliances or development of powerful nations or groups, what matters for us will be the development in the specific areas. The standards that the countries set for themselves are the ones they will continue to be judged by.

A- In fact, I hope we will have a less prominent role because that would imply that we managed to solve some issues. I would like to believe that we will see progress in solving these protracted conflicts in the next few years and that more trust and reconciliation will be visible. I would like to believe that issues like the regional instability in Afghanistan and the Mediterranean will have evaporated and that human rights standards and democratization will have improved. If this is what we will see in 2020, there will be less need for an organisation like the OSCE. Unfortunately we are not there yet and the international community still has a lot of work to do between now and 2020.