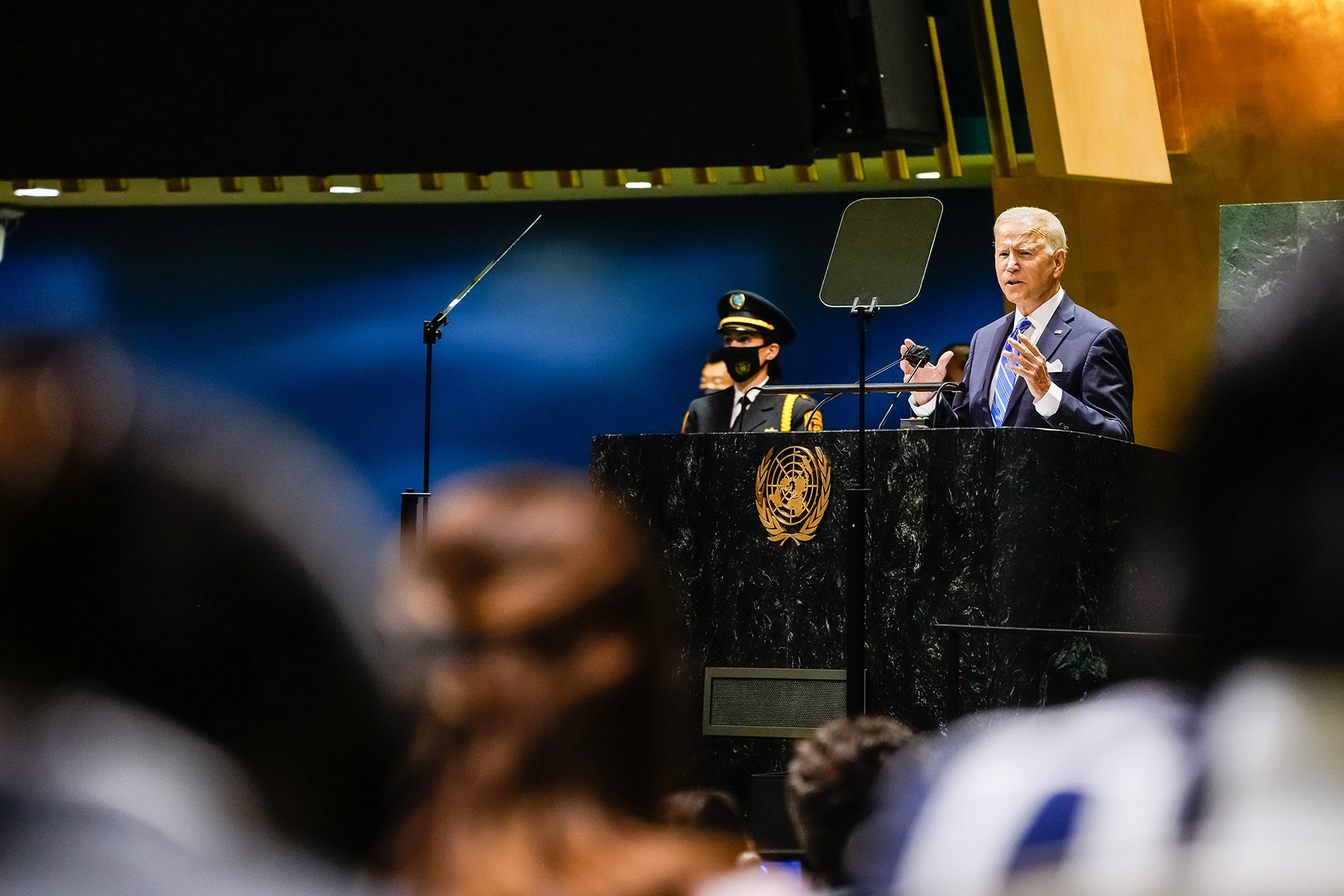 In 2019, former US President Jimmy Carter told a church congregation about a conversation he had with Donald Trump, the incumbent president at the time. He said Trump called him for advice about China. Carter, who normalized US ties with China in 1979, told the president that the United States had only been at peace for 16 years since the nation was founded. He also called the US “the most warlike nation in the history of the world.”

Carter considers his time in office to be peaceful, but his record says otherwise. Under his one term as president from 1977 to 1981, the US was still instigating conflicts across the world. The most notable was the Iran-Iraq War, which the US, the Soviet Union and their allies were heavily involved in by supporting the Iraqis.

The Civility Report 2021, a publication of the Peace Worldwide Organization, labels the US the world’s worst troublemaker. The evidence for this is clear.

First, the US maintains at least 750 military bases in around 80 countries. It also has more than 170,000 troops stationed in 159 countries. Second, in 2016, The Washington Post reported that the US has tried 72 times to overthrow governments of sovereign nations between 1947 and 1989. These actions were in clear violation of the UN Charter. Third, the US continues using economic sanctions against numerous countries to force their leadership to bow to Washington’s demands.

The worst example is Iran, which the US has sought to use a policy of “maximum pressure” against. Sanctions are also in clear violation of the UN Charter and affect civilians more than the political leaders they seek to squeeze. These unwarranted interventions in Iran have brought pain and suffering to people in a country that is not known for its human rights.

The US, meanwhile, is known well as a country that pays lip service to human rights, democracy and peace. It talks about a lack of democracy in some nations but favors tyrannical rulers in others. This includes countries like Bahrain, Egypt, the United Arab Emirates and Saudi Arabia.

The US today is the world’s only superpower, and with such power comes great responsibility. If the US is truly interested in human rights, democracy and peace, then it too must change its actions. It must begin by complying with the UN Charter and respecting international law. Washington must right its many wrongs — particularly in the Middle East — not because it is forced to do so, but because it is the right thing for a world in which peace can prosper. For this to become a reality, there are a number of areas for the US to consider.

The first area is addressing the US relationship with Iran. In the 1980s, in violation of the Geneva Protocol of 1925, the United States and its European allies provided assistance to Iraq when it leader, Saddam Hussein, ordered the use of chemical weapons against Iranian troops. Most victims of that attack in 1988 died instantly, while many others are still suffering from the consequences. Some survivors of the chemical warfare now struggle to find inhalers in Iran, which is scarred by sanctions. The US should acknowledge the role it played in the war and provide reparations for the injuries and damage it caused.

Today, the draconian sanctions the US has placed on Iran has deepened a rift with the European Union, Russia and China, all of which signed a nuclear agreement with Tehran in 2015. The US withdrawal from the Joint Comprehensive Plan of Action (JCPOA) in 2018 under US President Donald Trump led to the reintroduction of crippling sanctions that have hurt the Iranian middle class and the poor, causing hardship and death.

Washington must lift its unlawful sanctions, which Trump introduced to bring Iran to its knees. The US thinks that Iran is meddling in the affairs of countries like Iraq, Lebanon, Syria and Yemen, and that a policy of “maximum pressure” will force it to rethink its foreign policy. The Trump administration used this as an excuse to pull out of the nuclear deal, despite the Iranians complying with all of its obligations under the JCPOA. The US under President Joe Biden should also comply with the JCPOA by rejoining the agreement and lifting sanctions.

In the long term, a détente between the US and Iran could pave the way for the Iranians to forgive the 1953 coup d’état against the democratically elected government of Mohammad Mossadegh. During the Cold War, a US-orchestrated campaign led to the overthrow of Prime Minister Mossadegh. He was replaced with Mohammad Reza Pahlavi, the brutal last shah of Iran, who himself was overthrown in the 1979 Revolution. In a country struggling under US sanctions, memories of the coup have never been forgotten.

Iraq is another country where US actions have not been forgotten. If you attack anyone without being provoked, any court with an ounce of justice would require you to repair the inflicted damage. Relations between nations work in the same way. If a nation harms another without provocation, the aggressor is expected to repair the damage caused.

In 2003, under the false pretext that the Iraqis had weapons of mass destruction (WMD) and ties with al-Qaeda, the US under President George W. Bush invaded Iraq. The result was the overthrow of Saddam Hussein and his government, the destruction of infrastructure, the death of hundreds of thousands in the years to come and the displacement of 9.2 million Iraqis.

The US invasion inevitably led to the rise of radical groups like the Islamic State (IS), which in 2014 seized territory in Iraq and Syria. The trillions that American taxpayers paid for the Iraq War could have been well spent in the US on addressing poverty, building high-speed rail networks or repairing infrastructure. Instead, the dollars were spent on bombs and bullets to counter insurgents like IS.

When Iraqis led by Iranian General Qasem Soleimani and Iraqi militia leader Mahdi al-Muhandis formed a resistance against IS militants and expelled them from Iraq, many people were jubilant that their country was freed. Instead of congratulating Soleimani and Muhandis for the role they played, the US violated Iraq’s territorial integrity. In a US drone strike at Baghdad airport in January 2020, both men were assassinated in violation of international law. The US action was not only unlawful, but it also puts all foreign diplomats in danger by setting a precedent for other countries to assassinate enemies.

There are two ways the US can make up for its illegal actions of 2003. First, holding those responsible to account for the invasion and human rights violations would show the world that the US is serious about the rule of law. That includes the likes of Bush and his accomplices, who lied and betrayed the trust of the American people, as well as security and military personnel who went beyond the rules of war. Holding such persons to account would restore respect for the US across the world by demonstrating that no one, not even the president or American soldiers, is above the law. Second, providing reparations for the loss of Iraqi and American lives, the injuries caused, the people displaced and the property destroyed is essential.

Yemen is another place where bombs have destroyed the country under the watchful eye of the Americans. In 2015, a Saudi-led coalition supported and armed by the United States, Britain and France began indiscriminatingly bombing Yemen in response to a takeover by Iran-backed Houthi rebels. The destruction of Yemen has led to accusations of war crimes by all parties involved. It has also resulted in 5 million people being on the brink of famine and millions more facing starvation.

The US must promptly stop all military and intelligence support to the coalition. As the one nation with such political power, the US must work on bringing the combatants together by implementing the UN Charter that calls for respecting “the principle of equal rights and self-determination of peoples, and to take other appropriate measures to strengthen universal peace.”

As citizens in a free world, we must assume responsibility for our political leaders’ actions. First, as a bare minimum, we should realize that the problems we cause for others, sooner or later, will come back to haunt us. The example of US support for the mujahideen during the 1980s in Afghanistan is well known. Second, electing the right political leaders who strive for freedom and peace will not only benefit people in faraway lands, but also in the US itself. Instead of taxpayer dollars being spent on weapons, cash can be reinvested into our society to educate children, improve access to health care and do much more.

United, we can put “maximum pressure” on the US to become a leader in creating a world free from war, oppression and persecution.

*[The author is the founder and president of Peace Worldwide Organization, a non-religious, non-partisan and charitable organization in the United States that promotes freedom and peace for all. It recently released its Civility Report 2021, which can be downloaded here.]