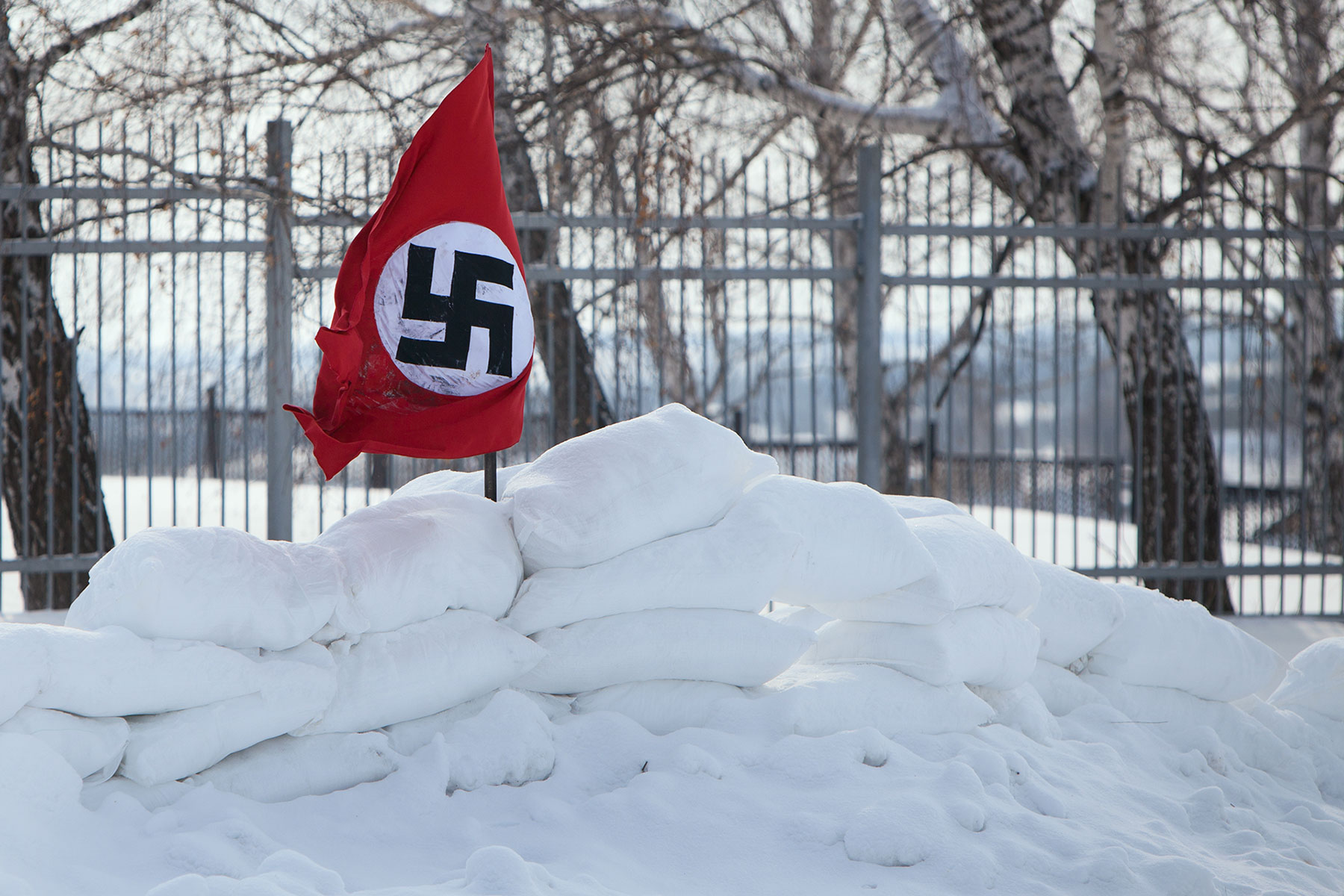 For one of the first times in history, an individual has been designated as a terrorist entity. Late in June, Canada added a 68-year-old resident of Denver, Colorado, to its list of proscribed terrorist entities. The individual in question is James Mason; he is a thrice-convicted jailbird with a felonious “interest in underage girls,” a former greeter at K-Mart now reduced to referring to his receipt of free meals at a soup kitchen for the needy as “guerrilla warfare.” So why bother?

Christianism: The Elephant in the Extremism Room

The Canadians are right to not be fooled. Nondescript and rarely captured on film since his last stint in prison ended in 1999, Mason is also the godfather of fascist terrorism. So just who is James Mason and why does an individual merit inclusion on a proscription list otherwise aimed at fascist groups?

By his own account, Mason has been a neo-Nazi for nearly 55 years now, joining George Lincoln Rockwell’s American Nazi Party at the age of 14. Mason bounced around after Rockwell’s assassination in 1967, washing up in the short-lived American terroristic group National Socialist Liberation Front (NSLF) in the mid-1970s. In 1980, things took a turn for the weird when Mason embraced the imprisoned cult leader, Charles Manson, and split off from the existing neo-Nazi scene to establish Universal Order.

Among other curiosities, this tiny group argued that Charles Manson, of all people, fit the mold of a Nazi leader for the postwar American world. This would likely have been Mason’s tragicomic fate had he not also revived the NSLF’s publication, Siege, in 1980.

Between August of that year and June 1986, Mason published comment pieces of roughly 1,000 words each in a monthly magazine, extending to more than 210 individual items. In 1992, the fascist ideologue Michael Moynihan edited and published Siege as a single volume. Although scarcely a best-seller, Siege clearly had its admirers. For one, the leader of WAR (White Aryan Resistance), the San Diegan Tom Metzger, was all ears.

Shortly after Siege was released, Metzger conducted several interviews with Mason on his television program, “Race and Reason.” Of especial interest to Metzger was Mason’s appropriation of the anarchists’ “propaganda of the deed” of the late 19th and early 20th century for right-wing extremists. Siege explicitly advocated this “lone-wolf terrorism,” with Mason preaching the virtues of so-called “one-man armies” and “lone eagles” fully three years before the better-known Louis Beam published (and republished online in 1992) his essay “Leaderless Resistance.”

In 2003, a second edition of Siege appeared, this time with added appendices and an internet-friendly format. One of these appendices included the transcript of a 1985 speech to Metzger’s WAR, which ended with the simple injunction that had made Mason infamous amongst the American neo-Nazi movement: “until the System is destroyed, by whatever means necessary, none of these fine plans will ever amount to anything more than a dream.” Turning this dream into a reality was the task of self-directed neo-Nazi terrorists, who have become, and will continue to be, a staple of 21st-century political violence.

Yet Mason’s role as ideologue likely would have remained minimal and even subterranean had it not been for the emergence of the Iron March platform in 2011. Envisioned as a clearinghouse for fascist militancy, Iron March shared Mason’s view that only destruction of liberal democratic systems could create the space for fascism to emerge again — an emphatic rejection of political engagement and still less of building a movement. The moderators at Iron March gravitated to Mason’s uncompromising advocacy of lone-wolf terrorism, so much so that they published a first “revision” of Siege in June 2015.

Just over two years later, in September 2017, a third edition of Siege was published under the Iron March imprint. It was identical to the 2015 version save for a new, 6-page preface by Mason, who had been located by members of one of the new neo-Nazi groups emerging from the Iron March forum, Atomwaffen Division (AWD). The latter celebrated Mason’s return to the neo-Nazi scene, and in 2017 secured Mason’s contributions to a website entitled Siege Culture. Mason ultimately wrote more than three dozen new pieces during 2017 and 2018 — before the website was taken down — in much the same style as his 1980s Siege writings.

Mason’s neo-Nazi gravitas and willingness to rejoin the fray was a major boon to so-called accelerationist cells, which were growing in both number and militancy. For example, by early 2018, the acknowledged leader of these loosely organized groups, AWD, had no fewer than five alleged murders ascribed to its supporters. That year, an early study of Siege’s influence identified “33 extremist entities — 21 individuals and 12 organizations — with ties to Siege. Of these 21 individuals, nine have been involved in acts of violence, four have been involved in specific murders, and four have been involved in threats or acts of terrorism.”

This political violence extended far beyond AWD and the US. Other groups around the world were quick to franchise these branded terror cells, from the Antipodean Resistance in Australia, the Scrofa Division in Holland, the Sonnenkrieg Division (SKD) in the UK, and even the Feuerkrieg Division in Estonia, led by a 13-year-old boy known as the “Commander.”

While Iron March provided the means and opportunity for lone-actor terrorism, it is without doubt that Mason supplied, and still supplies, the motive. In fact, the dalliance between the neo-Nazi ideologue and a clearinghouse for fascist militancy was only consummated after the Iron March website was taken down in late 2017. In 2018, a fourth edition of Siege appeared, with nearly 200 pages of added material. Much of this material was explicit propaganda for AWD, SKD and others, including dozens of new images and threatening statements by now-imprisoned leaders of the Atomwaffen Division, Brandon Russell (aka “Odin”) and John Cameron Denton (aka “Rape”).

Put another way, the evolution of Siege, as both text and terroristic encouragement, in 2018 finally found its natural home with AWD and other accelerationists trying to help overthrow Western democracies.

In the 30 months since, this wider Siege-inspired culture has continued to hone its tactics, including violent memes now dubbed “fashwave,” and advance a post-organizational ethos. Make no mistake, this neo-Nazi doctrine is reloading, not retreating. It is becoming younger and more militant by the day, particularly in light of COVID-19. At the time of writing, Siege culture is amongst the most pressing terror threats posed within liberal democracy, just as Mason giddily envisioned in 1980 in “Later on we’ll Conspire”:

“The lone wolf cannot be detected, cannot be prevented, and seldom can be traced. For his choice of targets he needs little more than the daily newspaper for suggestions and tips galore. … For his training the lone wolf needs only the U.S. military or any one of a hundred good manuals readily available through radical booksellers … His greatest concern must be to pick his target well so that his act may speak so clearly for itself that no member of White America can mistake its message.”

This is the face of radical-right terror today. It will continue to persist so long as we — scholars, authorities and practitioners — continue to misunderstand lone-wolf terrorism and, just as troublingly, discount the dangers posed by Siege culture coming from either keyboard warriors or misguided youth. The voluntarism, vehement racism and social Darwinist “proof” of individual political violence as a pathway to what is increasingly called sainthood (Saint Tarrant and Saint Breivik memes are increasingly popular) are all gathering speed online despite attempts to take down this material. Siege’s bloody heyday is likely still ahead of us.

This would mean that more mangled bodies of innocents to come, and more terrorist convictions of would-be lone-actor terrorists, many teenagers. That suits James Mason just fine, for he is nothing if not an agent of destruction. The Canadians have it right: Both the man and the movement he inspired are immensely dangerous. Banning Mason is a start — and other countries concerned about radical-right terrorism should follow suit — while both Siege Culture and the wider movement it represents must be at the top of any counter-terrorism efforts. This terroristic movement will scarcely disband itself. 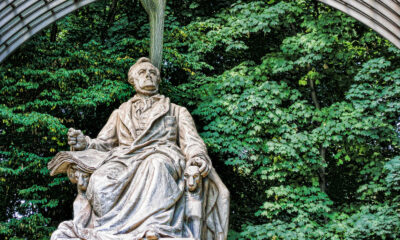 From Opera to MMA: Nationalist Symbolism and the German Far Right