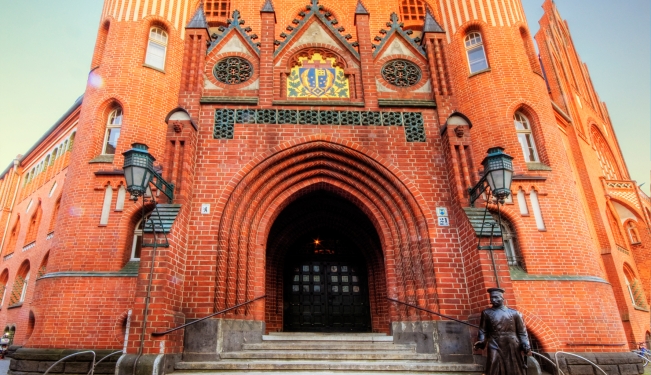 In early 20th century Berlin, an ex-convict shoemaker—caught in a legal no-man’s land where he can neither obtain work without a residence permit, nor earn a permit without work—purchases pieces of a Prussian Captain’s uniform to expedite his needs. Dressed as a Prussian Guards Captain, the shoemaker commandeers a group of soldiers and seizes the city hall of Koepenick, a small town outside Berlin, to obtain his resident card. He arrests the town mayor and the town treasurer on fabricated fraud charges, confiscates several thousand German marks, and mysteriously disappears after ordering the soldiers to bring the town officials to the police station, an order the soldiers faithfully execute. Though it might take more than a thrift store captain’s bars to detain a local mayor, military leaders have long held a Prussian-like prestige in the United States. In a recent Foreign Policy article, Stephen M. Walt states:

With the United States mired in two lengthy conflicts, American politicians feel a need to constantly reiterate their support for "the troops" and their respect for the generals who run our wars, especially media-savvy commanders like Gen. David Petraeus. Criticizing the military would invite others to question one's patriotism and therefore is out of bounds. This trend is not healthy because civilians who are overly deferential to the military are unlikely to question military advice, even when it might be bad for the troops as well as the country. But generals are as fallible as the rest of us and should not receive a free pass from their civilian counterparts.

Walt’s statement would sound familiar to a feuilleton reader in a Berlin café in 1906, where German intellectuals debated the ‘malaise’ of militarism and “Prussianism” of German society. Might the United States be suffering from a Koepenick syndrome where military leaders are above question?

The status of military leaders and public suspicion of standing armies date to before the American Revolution, but has only recently received increased attention. A prominent critic of US militarism, Andrew J. Bacevich, outlines these concerns in his recent book American Path to Permanent War. Others follow suit. For example, in the December/January 2011 issue of Foreign Affairs, in an article entitled “The Dangers of U.S. Militarism: Manufacturing Insecurity”, William Pfaff states:

The United States' millenarian notions of a national destiny and the militarism that has infected American society have been responsible for a series of wars from which Washington has gained little or nothing and suffered a great deal, while contributing enormously to the misfortune of others…. Without excessive exaggeration, one might say of the United States today what once was said of Prussia—that it is a state owned by its army.

While the comparison of the democratic and liberal United States with 18th and 19th century autocratic Prussia seems ludicrous in one respect, the comparison warrants notice. In few other Western countries are members of the armed services accorded more respect and taken as shining examples of professionalism and leadership. In a compelling article in the Atlantic Monthly on why officers are leaving the armed forces, Time Kane poses a revealing question, “Why does the American military produce the most innovative and entrepreneurial leaders in the country, then waste that talent in a risk-averse bureaucracy?”

Surely, this question could not have been posed in Germany or any other Western country. “Innovative” and “entrepreneurial” are the last words expected to describe military leaders. The credibility of policy pundits and advisors in Washington expands with the magnitude of military service; whereas on continental Europe, one is viewed with suspicion when possessing any record of military affiliation. In the United States, soldiers are bought drinks by strangers and thanked for their service to the American people. These same expressions of gratitude would not occur in Europe. A German army doctor who recently returned from Afghanistan told the New York Times: “This sense of appreciation, you don’t get that, the feeling that wearing your uniform, people are going to be proud of you.”Part of this difference in response is naturally the result of the difference between a war and peacetime army, but even this does not explain the whole story.

Obviously this reverence has not continuously been the case. In the Vietnam era, the US Armed Forces were held in very low esteem. The public and government in the 1970s, however, soon realized the travesty experienced by the soldiers coming home from the war. By the early 1980s, Ronald Reagan's massive rearmament programs had restored pride to the profession. The confetti parade of the Desert Storm forces marking the Allied victory in the first Gulf War in 1991 symbolically re-established the public's esteem of the United States Armed Forces – an admiration that continues to this day.

In few other democratic countries in the world have more generals found places in administrations or indeed have become heads of states (one notable exception is Israel). Almost every four-star general in the United States is sooner or later presumed to have presidential aspirations. Interestingly, it is the presidents who were former generals (George Washington, Ulysses S. Grant, and Dwight D. Eisenhower) who usually display the least confidence in the performance of the armed service. The military influence can be seen in foreign policy. A report by the Advisory Committee on Transformational Diplomacy states:

DoD’s regional combatant commanders have come to be perceived by states and other actors as the most influential US government regional representative. It is argued that the resources that combatant commanders control, their presence and frequent travel throughout the region, and even the symbolic impact of their aircraft and accompanying service members, all combine to place them in perceived position of preeminence.

This assertion is supported by a study of The Project on National Security Reform, the most comprehensive effort to date to analyze the US national security system and propose recommendations to alleviate many of its bureaucratic problems. Its conclusion emphasizes that an inequality of resources leads to an inequality in policy—i.e., the militarization of US foreign policy.

This militarization can be seen even in the most trivial exchanges, as illustrated by a recent article in Rolling Stone Magazine in which General David Petraeus, Commander of U.S. forces in Afghanistan, was recorded as referring to Holbrooke as his “wingman”.  "Since when did the diplomat become the general's wingman?" Holbrooke allegedly replied. "It's supposed to be the other way around!"  One symptom of the Koepenick syndrome, evident from this exchange, is a disproportionally large military influence on policy making.

Another symptom is the tendency to look to the military for innovation and leadership skills that can inspire and be emulated by the civilian private sector. The preponderance of resources and the military strength of the United States, however, are detrimental to the very spirit it seeks to create. Most recent US victories were not fuelled by brilliant feats of arms or innovation, but by feats of logistics. There is an American saying, “Amateurs talk about strategy, dilettantes talk about tactics, and professionals talk about logistics.” Indeed, this has been the United States’ strength since the U.S. Civil War. While logistics are often referred to as eighty percent of the battle, they are more the outgrowth of the old industrial notion of efficient organization, rather than the result of the armed forces’ innovative spirit.

One way for the United States to escape from the Koepenick syndrome is to cut its defense budget. Such economizing can liberate a new spirit of innovation. Prussia, impoverished by the Wars of Frederick the Great and humiliated by Napoleon, still managed to field one of the best led and most innovative armies in the Wars of Liberation and the Waterloo campaign. Indeed, it was the internal mechanics of the reconstituted Prussian General Staff—one of the major points of Prussian Army reform—that was partially responsible for the defeat of Napoleon in the Waterloo Campaign.

Reducing the defense budget would not threaten the United States’ security nor would it lead to a decline in international standing. In a recent article entitled “A Leaner and Meaner Defense: How to Cut the Pentagon’s Budget while Improving its Performance,” Gordon Adams and Matthew Leatherman argue:

Should the cuts be implemented, the remaining U.S. military force would still be superior to any other in technology and capability. It would be the only force capable of patrolling the world’s oceans, deploying hundreds of thousands of ground forces anywhere on the planet, dominating airspace, and managing intelligence and logistics worldwide. These reductions would result not only in a more focused and more efficient U.S. military capability but also in a defense budget that, although still very large, would help solve the United States’ fiscal problems.

Innovation and leadership, the two attributes of the US Armed Forces most sought after in the business community and admired by the general public, are not promoted in a culture of military dominance and abundance of resources. Prussia’s reverence for its military stemmed from the campaigns of 1812 and 1814, and from the Franco-Prussian War in which Prussia had to achieve maximum results with minimum resources. The subsequent military build-up and the notion that the soldier is the first man in the state undermined Prussia’s weak political institutions and set it on a self-destructive course.

January 2011 marked the 50th anniversary of Dwight D. Eisenhower’s farewell address. In it, he warned the American people of the growing influence of the “military industrial complex”.  An outgrowth of this “total influence”, as Eisenhower put it, is the United States’ reverence for its armed services and the men commanding them. While it is unlikely the United States will ever take the path of Prussia, the dangers of the Koepenick syndrome are real— a disproportionately high admiration for the leadership and innovation of uniformed men and women, and a minimized civilian influence over tough policy decisions.