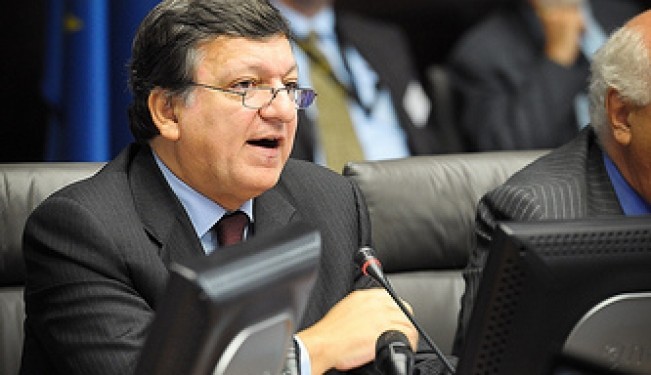 The agenda for the annual US-EU summit must be carefully put together if the European Union and the United States are to help each other through the financial crisis, present a common front on the revolutions sweeping the Middle East, and cooperate in order to enhance trans-Atlantic relations.

Washington’s recent pre-occupation with Asia gives way tomorrow to the US-EU summit at which President Obama will sit down with European Commission President José Manuel Barroso, Council President Herman Van Rompuy, and High Representative Catherine Ashton. As with past gatherings of this sort, this one promises to be a low-key event. But given the magnitude of the eurozone debt crisis, the high levels of unemployment on both sides of the Atlantic, and a taste for austerity in foreign engagement, the meeting could prove one of the administration’s most important.

Past summits have put in place initiatives that are beginning to yield tangible results at the working level. The 2010 Lisbon summit, for example, launched the US-EU working group on cyber security. Along with the US-EU Energy Council and the Innovation Action Partnership (IAP) in the Transatlantic Economic Council (TEC), the summitry is slowly grafting together nodes of consultation. This dense overlapping network is creating trans-Atlantic frameworks for portfolios such as energy, IT, privacy protection, trade and raw-materials policy.

That said, strategic guidance at the presidential level has been a more difficult to achieve. Criticism of past US-EU summits has been that they are unfocused and lacking ambition. The incentives to pack the agenda with a roster of every imaginable issue dilute the strategic effectiveness of leaders setting clear priorities. At the same time, summits have punted visionary projects that could focus the mind of policymakers and imbue the relationship between the world’s largest economies with greater purpose.

To prevent a recurrence of this, tomorrow’s meeting should focus exclusively on three key areas: strategic consultation on the eurozone crisis, forward-looking creation of an agenda on jobs, and pooling resources for post-Arab Spring transition countries.

Europe’s triple fiscal, competitiveness and banking crisis could have a triple blowback on the American economy. It could rob the US of the largest pool of consumers for its goods and services, damage a vital repository for US foreign direct investment and cause enormous damage to the US banking sector.

The Obama administration is right to worry about it. More than one-fifth of US exports go to the European Union. Declining demand there, the largest foreign market for US products, could pinch US GDP by as much as 2.9 percent. For the banking sector, a euro collapse would choke off lending that could starve European banks of capital, blow holes in balance sheets and spread financial catastrophe around the globe. US banks may have limited exposure to the sovereign debt of the EU’s periphery, but their links to the European banking system are extensive. Financial disaster on the other side of the Atlantic could tear the fragile US recovery to shreds.

Washington should also make clear that the eurozone must hold together. German politicians who hint that Greece could or should exit the eurozone act irresponsibly. They undermine the true commitment to the single currency and invite speculators to test the credibility of that commitment. The US should state clearly to EU leaders that such talk cannot be tolerated as it threatens the European and American economies.

Thus far, the US has targeted eurozone member-states, in particular Germany, in its outreach to Europe on the crisis. With its growing influence and more ambitious eurobond proposal, the Commission offers a strong complement to Berlin.

Unlock the Latent Power of the Trans-Atlantic Economy: A jobs agenda

US export growth has been one of the most impressive economic legacies of the Obama administration. Its National Export Initiative (NEI), which looks to double US exports by March 2015, has already contributed to a 25.3 percentincrease in exports. Yet there remains a great deal of untapped growth potential in the trans-Atlantic market.

A Commission-initiated study contends that policies to eliminate non-tariff trade barriers could unleash an additional US$158 billion (or 0.7 percent) in GDP growth for the EU and US$53 billion (or 0.3 percent) for the US. A 2010 studycommissioned by the US Chamber of Commerce demonstrated that the removal of such barriers would net even greater benefits: an increase in exports from the US to the European Union of up to 17 percent (US$53 billion) and from the EU to the US of up to 18 percent (US$69 billion). These trade gains could boost US GDP growth by as much as 0.6 percent and EU GDP growth by almost 1.0 percent.

The economic boon could translate into high-value jobs in the manufacturing sector. With this in mind, the Bertelsmann Foundation and the Atlantic Council proposed in a strategy paper in November 2010 that the Obama administration craft a trans-Atlantic jobs agenda with a one-million job compact at its heart.

There is substantial support for such an effort. Think tanks, the business community and hearings in Congress have been clamoring for such a sweeping initiative in recent years. The European Parliament has issued a resolutionstating that a roadmap for easing trade and investment should be a priority and that the TEC process can be the vehicle for action.

Revolutions and continued unrest in the Middle East and North Africa could bring about the greatest geopolitical transformation of the last decade. The US and EU account for more than 80 percent of aid to that region but both are entering a period of protracted introspection. Significant cuts to foreign assistance, particularly from the US, may lie ahead. The US and EU should therefore integrate efforts to consolidate the burgeoning gains to Arab democracy.

Presidents Obama and Barroso should establish a joint unit for development assistance in transition countries and task its coordinators with identifying and enacting tangible savings through combined operations in reconstruction and development that can be demonstrated to Congress, the European Parliament and EU member-states. Election monitoring, technical assistance, infrastructure planning, capacity building, rule of law, regulatory reform, and tax, fee and lease collection from extractive industries are areas in which Washington and Brussels can cooperate. An institutionalized joint planning team for assistance in these areas would provide greater economic returns for both sides by avoiding duplication and increasing aid effectiveness. Such a high-profile planning cell would also send a political signal that the US and Europe stand united in their goal to integrate transition countries into the community of liberal democracies.

*[This article was originally published by Bertelsmann Foundation on November 27, 2011]