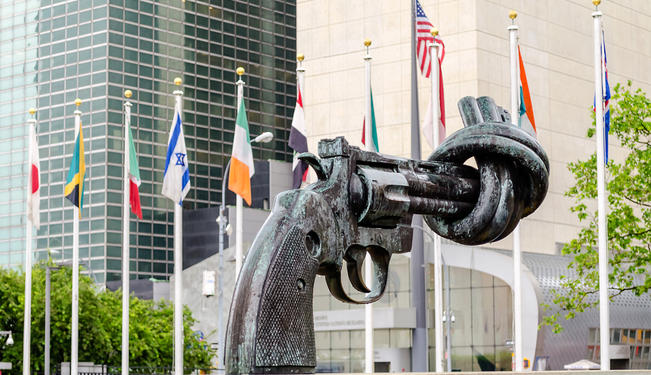 No immediate rapprochement is expected between the US and Iran.

Few policy makers in the United States conceal the fact that the Obama administration would like to use the intention of Iranian authorities — to normalize their relations with the West — to restore political ties between the two countries, which were cut over 30 years ago.

Moreover, as argued by some analysts, US President Barack Obama has good chances to achieve some success in this field. Indeed, for the first time during, at least, the last decade, the presidents of the US and Iran are determined to reconcile their nations. Each of them has their own reasons to do so.

Different Interests, But One Goal

President Hassan Rouhani came to power in Iran by playing on the feelings of the majority of Iranian society, which expected government moves aimed at a substantial improvement of life and socioeconomic conditions. The latter was, and still is, inseparably related to the easing of US and EU sanctions which put pressure on the Iranian economy.

As a result, success in reestablishing a dialogue with Washington is vitally important for President Rouhani and his team. Success largely depends on the positive outcomes of American-Iranian negotiations, and whether Rouhani will manage to preserve his extensive popular support and, subsequently, guarantee his upper-hand in any political debates with the opposition from the domestic hardliners camp.

For Obama, in turn, the stakes for a US-Iran rapprochement are high as well. As stated by an American official in an interview with the author, while approaching the end of his second and last presidential term, Obama is seriously concerned over the trace he will leave in history.

According to the interviewee, the president (who was initially elected as a future peacemaker) has few things to be proud of: the controversial military operation in Libya; the unjustifiably rapid withdrawal from Iraq; a hesitant position on Syria; and obvious failures in the promotion of democratic values in the Middle East. These should probably be considered as symbols of Obama’s failure rather than success.

Taking into account the domestic misfortunes of the current administration, the diplomatic success on the Iranian issue could be a remedy to improve Obama’s image while he loses popularity not only on American streets but also in his own political party.

The necessity to reestablish connections with Tehran is also determined by certain practical changes in US foreign policy, which are often mistakenly taken by some analysts for the beginning of an American withdrawal from the Middle East. These analysts often refer to the Obama administration’s relatively new regional strategy — the "Pivot to Asia" — which implies the partial reassessment of Washington's priorities in the broader Asian region.

Indeed, some recent American moves, such as the decision to avoid deeper involvement in Syria or to limit military supplies to Egypt, may create a false impression that the United States is going to limit its presence in the Middle East.

However, according to US experts, it would be more accurate to talk about the readjustment of Washingon's regional priorities according to new challenges. They argue that the US gradually becomes more pragmatic and less straightforward regarding its foreign policy.

Washington will be more inclined to implement the strategy of “restrained power," which implies the usage of force and coercion only when and where it is really needed.

According to this strategy, there is no need to spread democracy everywhere if the region is not ready for this. There is also no necessity to counterbalance the Russian encroachment on the Middle East, as long as Moscow is ready to share the responsibility for political turmoil in the region.

Within the framework of this approach, Iran acquires special importance. According to a Russian expert on the Islamic Republic, Vladimir Evseev, Iranian involvement in Afghan and Syrian affairs — as well as Rouhani's approach with talks over Iran's nuclear program — make Tehran a potential partner for the US. As a result, the White House has already declared Iran a sphere of its national interests, and finally rejected the idea to change the political regime in the country by force or any other means.

Have the Secret Talks Already Begun?

Yet there are a lot of obstacles which the countries need to overcome for the normalization of bilateral relations. First and foremost, these problems are related to the format of future talks between the countries. Officially, US authorities insist that at the initial stage they will be developing relations with Tehran only within the framework of the P5+1 group.

According to some officials at the State Department, such behavior will demonstrate US unity with European allies in their efforts to influence the Iranian stance on nuclear research. This is especially important after the Syrian chemical weapons episode earlier this year, when Washington’s decision not to launch a military operation against Damascus was considered as a betrayal by France.

Nevertheless, this multilateral format is not very suitable for the arrangement of a further US-Iran rapprochement. Tehran and Washington have to discuss too many issues beyond the nuclear problem, and it is not always convenient to get other members of the P5+1 group involved in this discussion.

Subsequently, semi-official bilateral talks seem to be inevitable, and information that they have already begun periodically appears in the English, Arab, or even Russian press. All these reports look like speculations rather than truth, but where there is a smoke there is a fire.

Thus, in his recent article for the Institute of the Middle East in Moscow, Evseev mentions several secret meetings between Iranian and American delegations in Oman, during which the sides discussed the draft of the above-mentioned agreement signed in Geneva in November 2013. According to the expert, the document adopted by the P5+1 group appears to be an American-Iranian accord rather than a multilateral roadmap.

The negotiations are supposed to continue in the future. Allegedly, their ultimate (and still unachieved) goal is to work out a diplomatic solution for other issues of US-Iran relations, which would guarantee the adoption of a final accord between the countries.

Subsequently, this accord would lead to the restoration of economic and political ties between the two states. As mentioned by some media sources, the agenda of the current and future American-Iranian consultations can be roughly divided into the following two sets of questions: nuclear-related issues and non-nuclear issues concerning bilateral dialogue. A certain level of success has been already achieved with regards to the nuclear issue, whereas the non-nuclear problems are expected to be discussed.

What is on the Table?

Even though there is no reliable information about the direct talks between Washington and Tehran — there is also no official confirmation of the existence of such a negotiation process — American officials and experts close to US policymakers are actively discussing hypothetical questions which could be raised by negotiators.

First of all, most of them believe that US officials will probably not be discussing issues of terrorism support and the anti-Israel focus of Iranian foreign policy. Some of the aforementioned experts even unofficially confess that these questions were used by the Americans only as political leverage to put additional pressure on Iran. (When building the anti-Iranian coalition during the period of 2010-2012 and earlier, the US periodically referred to these issues in order to persuade the international community that Tehran was deservedly considered a member of “the Axis of Evil.”)

Currently, analysts are more and more arguing that Israel will receive less American support in its confrontation with Tehran. As for Iranian support for organizations considered as terrorist groups by the US government such as Hezbollah and Hamas, American experts and policymakers are quite relaxed about this.

On the one hand, according to them, Hezbollah and Hamas have been seriously weakened by political turmoil in the region. On the other hand, it is not in Tehran’s interest to support any subversive activities, if the Iranians do not want to be deprived of the chance to reestablish relations with the West and ease the sanctions pressure. Under these conditions, cooperation on Syria and Afghanistan could probably be the main questions of the hypothetical agenda of negotiations between the US and Iran.

Indeed, Syria may create the necessary ground for future talks. As believed by some American analysts, Tehran and Washington have much more in common with their vision for Syria's future than the US and Arab states. Moreover, although Ayatollah Ali Khamenei still insists that the preservation of Syrian President Bashar al-Assad in power is vitally important for Iran, Rouhani and his supporters see in Syria just another trading item in American-Iranian relations.

Moreover, this vision is gradually spreading among the Iranian political elite. Initially, the Iranians believed that, after the fall of Damascus, the external foes of the Islamic Republic who currently support the Syrian opposition will try to overthrow the political regime in Iran (this point of view is still supported by Iranian hardliners).

However, the situation has changed. After a number of Saudi Arabian failures to overthrow Assad and Obama’s decision not to actively lobby for regime change in Iran, Syria lost its meaning as the last stand for Tehran. Moreover, it turned into a headache. Apart from the drain of human and financial resources spent by Tehran on support for Damascus, the Syrian conflict badly influences another ally of the Islamic Republic: Hezbollah.

*[Note: Read the final part here. Some sources in this article have not been explicitly named. The author and Fair Observer respect their right to remain anonymous.]