The US is abandoning one of the G7’s founding principles: free trade. How could that be?

Most normal people have an aversion to war. It brings on death, suffering, destruction and incalculable loss. We avoid it usually by diplomacy and negotiation in which all sides manage to get something while also giving something up.

Trade wars aren’t much different. The biggest casualties in trade wars tend to be smaller nations, their economies and their workers’ jobs. With their backs to the walls, they may be forced to take more drastic action, often siding with like-minded larger states, ultimately forcing a fighting war, as happened in World War I. But again, diplomacy and negotiations — every bit as tough as those involved to avert fighting wars — helps us avoid the nearly equally destructive effects of trade wars.

Donald Trump isn’t like most people. In fact, he thinks trade wars are “good and easy to win.” No modern-day economist, trade negotiator, banker, business leader or reasonably well-informed person could agree with such a ludicrous statement. President Trump’s political party, the Republicans, used to hold free trade as an article of faith. But blind allegiance to an apparently clueless leader has now obscured that core logic.

What is it that Trump sees in a “good” trade war that hardly anyone else does? “The difference between genius and stupidity is that genius has its limits.” The quote variously attributed to Albert Einstein and Alexandre Dumas may seem the only explanation.

Through the 18th and 19th centuries and into the early 20th century, the world’s major trading nations followed a mercantilist approach to trade. Maximizing one’s exports while minimizing imports allowed states to amass wealth, which in turn led to the creation of military might and global power. Even smaller nations, in order to protect their already disadvantaged economies, turned to protectionism. Under this model, the major nations of Europe prospered. In such a system, there were only winners and losers.

Adam Smith and David Ricardo changed all of this. They showed that real national wealth doesn’t come from amassing wealth. Real economic progress and wealth result from boosting productivity — i.e., making goods or offering services more efficiently. Increasing productivity increases quality of life. And a better quality of life of its citizens — such as improved educational opportunity, health care, housing, more leisure time, etc. — is the real wealth of a nation.

Smith and Ricardo, as well as economists who followed, argued that by specializing in what it does well and continuing to perfect itself in that area, a nation can not only trade more but grow in wealth. It trades with nations adept in other areas. So, America produces abundant agricultural crops, develops sophisticated software, manufactures state-of-the-art aircraft and satellites, and trades for cars, cellphones, shoes and clothing, goods produced more cheaply and efficiently elsewhere in places such as Japan, China, Germany, Mexico and Sri Lanka.

America: The Former Champion of Open Trade and Global Prosperity

After World War II, the United States, the world’s lone super power, effectively “imposed” Smith and Ricardo’s theories on the world. At Bretton Woods, along with other nations, it created GATT, the General Agreements on Tariffs and Trade, with the objective of lowering tariffs and other trade barriers and boosting trade worldwide. And it wasn’t for just American trade and wealth, but global trade and wealth.

According to noted trade historian Craig VanGrasstek, “the time seemed right to establish a new world order based on inclusiveness and the rule of law.” Countries began to concentrate “on the cooperative creation of wealth [rather] than on appropriating it all to themselves.”

Most importantly, the US recognized that if the world were to avert a repeat of the twin tragedies of the first half of the 20th century, as well as the calamity of the Great Depression, then a more open and transparent system of trade would be critical. The US and those other nations who signed onto GATT in 1947 and to its successor, the World Trade Organization, in 1993 understood that the overarching goal of free trade was not to maximize any one nation’s wealth. Rather, it has been advancing greater economic integration and supporting global peace and stability through increasing the wealth of all nations’ citizens. Economic prosperity of individual nations as well as that of the planet became essential to that goal. Trade was a vital component.

While some nations eschewed this enlightened course — the Soviet Union and other former communist nations and even China to a certain degree today — the vast majority of the world’s governments have signed on to this approach, though sometimes reluctantly. Big trading states (e.g., China) have now embraced it, though with conditions that have brought us to the state we’re in at present. (More on that later.)

Major trading powers like the US, the European Union and Japan have continued to champion not just the specific rules of the WTO, but more importantly its overarching principles and goals. Free trade agreements and free trade areas have boosted the impact and advantages of free trade. This led to a fairly robust global economic system, even under circumstances like the 2008 recession. Most of the nations of the world benefited from it, despite the internal dislocations that globalized trade and finance have inflicted on certain displaced groups within countries, including among the most developed nations. All saw the underlying good of the system and accepted and abided by it.

Until now. President Trump, drawing from the pages of Europe’s early 19th century trade policy playbook, is now defending mercantilism. He has imposed tariffs on steel and aluminum products from the EU, Canada and Mexico — some of America’s stoutest allies and most cooperative trading partners — and threatened also to impose tariffs on imported automobiles and parts. He apparently believes that in this world of global supply chains, nanosecond financial transactions and global trade exceeding $16 trillion, America’s economy and its workers are best served by 19th-century trade practices.

His logic actually would seem to make sense. In “Trumponomics,” the only useful economic yardstick is GDP and the trade balance. Superficially, protectionism might seem to work… if we were in the 19th century. But ultimately, it flops in the 21st century even when invoking his absurdly irrational “national security” rationale — technically permitted under the WTO but patently ridiculous when considered in light of the nations targeted, most of whom are NATO members or close US allies.

We will always stand up for Canadian workers, their jobs & their livelihoods. Today at the @g7 I sat down with @realDonaldTrump for a meeting focused on trade and NAFTA negotiations. pic.twitter.com/roVuNV54ft

The imported goods that have been targeted account for less than 2% of total US imports and just 0.2% of total economic output. If the Trump administration follows through with other threatened tariffs — e.g., on autos — however, the impact on total US imports might reach as high as 15%.

As writer Catherine Rampell argued, “even mercantilists of the 18th and 19th centuries knew that if you were trying to use tariffs to boost your trade surplus, you wanted to tax imports of finished goods, not the intermediate goods that the domestic industry needs to make those high-value, finished-good exports.” Taxing intermediate goods or inputs only increases the prices of domestically produced goods that require those inputs.

So, imposing tariffs on goods utilizing steel and aluminum such as cars, food and beverage cans, and construction materials made in the US will raise the cost of those US-made items. Those price increases will ripple throughout the American economy. So, it not only raises the likelihood of inflation, but also depresses the volume of those goods sold. Fewer of those goods sold means lower revenue, less production and, ultimately, job cuts.

Economists at Barclays estimated in March that steel and aluminum tariffs, by reducing trade volumes and boosting inflation, could reduce US growth by 0.1 to 0.2 percentage points. The research firm Oxford Economics estimates that steel and aluminum tariffs by themselves will lead to net job losses of 70,000 in the US manufacturing sector — with 10,000 new jobs in the metal-producing sector offset by 80,000 jobs lost in metal-consuming sectors.

Trade disputes are nothing new, even among friends and allies. The US and the EU have had their differences. But as members in good standing within the WTO and as allies, those were nearly always resolvable through negotiations. So, the tariffs Trump levied on those countries’ exports to the US were simply wrong and bullheaded.

China poses a different trade problem. Though also a member of the WTO, it is known to illegally purloin American intellectual property, from software to machine blueprints. Moreover, it has imposed undue requirements on US firms seeking to invest in China. The latter, known as TRIMS for Trade Related Investment Measures, are intended to force US companies to share their intellectual property or license it without adequate compensation. It’s a “shakedown.” These trade practices are violations of WTO rules. Those are areas where America should be concentrating its trade efforts, especially if Trump’s criterion is trade imbalance.

Moreover, nations of the EU as well as other US trade partners and allies are suffering similar problems with China and doubtlessly would have joined the US in a comprehensive effort to get China to change its practices. America’s trade deficit with China rose to over $500 billion in 2017. That’s four times the trade deficit with the EU.

But those countries are not about to sign on to such a joint initiative when they’re under attack by their supposedly best friend. Meanwhile, China gets a free ride. So, apparently, trade wars are a good thing for some.

The biggest tragedy in Trump’s tariff decisions is not the actual act of imposing the tariffs, as foolish and self-defeating as that will be. Rather, the nation that led the world to a more open, effective and successful globalized trade regime has abandoned one of its founding economic principles. And by so doing, it is losing the many friends, allies and partners it had managed to gain.

The world’s bridge builder has moved into the demolition business. 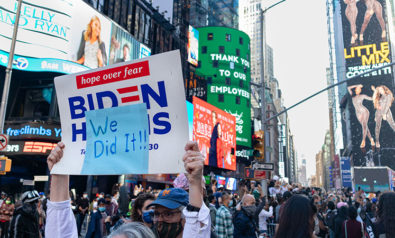