Business Insider is as fascinated by the adventures of Elon Musk as The Daily Devil’s Dictionary is by his hyperreal illusion machine that clearly beats anything the illusionist David Copperfield has been able to devise. An article informs us of the latest carefully engineered and publicized boasts that serve as the supporting pillars of Musk’s increasingly elaborate hyperreal cathedral of pseudo-innovation.

One day of the week Musk is defending his unorthodox way of managing electric car manufacturer Tesla and his commitment to innovation by offering a choice of scatological honks. The next day he is vaunting his glitzy Starship rocket from his interplanetary travel company, SpaceX, while dodging criticism from NASA for not delivering his publicly-funded Crew Dragon on time. Another day, he may be promising to revolutionize urban transport with The Boring Company, unless, on that particular day, he’s more concerned with marketing recreational flamethrowers.

And in the same week — after fending off various lawsuits for libel and sanctions of the US Securities and Exchange Commission (SEC) — he may be claiming to have effectively countered humanity’s imminent fear of being overtaken by artificial intelligence (AI) by offering his own cyborg solution that promises to allow humans to control AI thanks to the technology he is developing at Neuralink.

Business Insider offers Musk some much-coveted PR for Neuralink in an article explaining the scientific basis of his solution to merging human and artificial intelligence: Elon Musk doesn’t want to stick with what is already possible. He said, in classic Muskian style, that apart from treating neural conditions such as Parkinson’s, he hopes that Neuralink could one day facilitate a ‘symbiosis’ between humans and AI.”

Symbiosis in the realm of biology designates the shared interaction between two highly differentiated living organisms. The idea of symbiosis between humans and AI would appear to be either a misnomer or, more likely, a marketing ploy on the part of Musk. The Cambridge Dictionary provides this definition of symbiosis: “[A] relationship between two types of animal or plant in which each provides for the other the conditions necessary for its continued existence.” Musk may well be suggesting that with the advent of AI, humans need to foresee a symbiosis with AI to ensure their “continued existence.”

The article in Business Insider may not enlighten its readers on the question of whether symbiosis is either necessary, good or even possible, but it does tell us a lot about how Elon Musk has constructed a unique hyperreal cultural universe. And though it avoids explaining the working principles of Musk’s universe — the range of its components, how they are funded and managed and how the PR machine that gives them their external veneer can be put in motion with the complicity of media — it does provide a number of hints about the nature of its hyperreality.

It reminds readers that Musk started the company discreetly and a year later offered the scoop to The Wall Street Journal that he established Neuralink with a noble goal: to “merge computers with human brains.” Business Insider calls Neuralink “a curious side hustle” but then reminds readers that it “zeroes in on one of Musk‘s main fears — artificial intelligence.”

As a marketer, Musk appears to have learned the lesson the most expert politicians (aka electoral marketers) have taken on board as their essential strategic tool: create a climate of fear and then offer a marketable solution to confront that fear and overcome it. For several years, Musk has been claiming that AI is a menace to humanity, stating that, as someone knowledgeable about how it works or will be expected to work in the future, “it scares the hell out of me.” If Musk himself is scared — and we know he knows a lot more than we do — people should be eager to buy into his solution, whenever it happens to be ready.

For all his flair for innovation and an unquestionable level of technical genius to match his equally apparent amateurishness as a business mind, Musk appears to be especially good at playing on people’s emotions, from adoring admiration to fear. He is the paragon of builders of hyperreality, on a par with Donald Trump and Steve Jobs, possessing the flair of the first and the technical wizardry of the second. And Musk shares with both the narcissism that has allowed all three of them to conduct experiments in the most outlandish ways in public (with other people’s money) while being admired and even adulated for their failures as much as their successes. Those three are the face of hyperreality and its master-builders.

Only one of the three calls himself a “very stable genius” or vaunts his “unmatched wisdom,” partly because his narcissism is so extreme that he has to keep praising himself. Over their respective careers, Musk and Jobs have consistently let other people make the claim, though their actions have always been programmed to elicit that description.

The Verge reported on the same “breaking news” about Neuralink’s innovations back in July, which makes it less of a scoop. Business Insider includes analysis by experts, which may not have been available before its publication on October 6, meaning it is legitimate news. But the repetitive and often redundant pattern of releases about Musk’s contributions to humanity’s future and the predictable complicity of the media in spreading the news represent a key operational feature of hyperreality. It must appear to be news at all times, not just because it’s new, but because it is constructed as suspense built entirely around the public’s sense of fear and foreboding.

Musk is the supreme exploiter of a trend born in the late 19th century that rapidly matured throughout the 20th century: the fascination with futurism. It fits perfectly into the capitalist ideology that sees innovation not so much as the key to human happiness, but rather as the shortest path to monopoly, the implicit ideal of every capitalist and entrepreneur.

Innovation responds either to an identifiable need or as a gain in convenience — from can-openers and light bulbs to smartphones and online payments (e.g., PayPal, of which Musk was a founder) — or to the response to a fear, something that politicians more than businesses tend to do to sell their attempts at a power grab. Musk has used fear as the basis for promoting SpaceX: We need to colonize space as the Earth is likely to become uninhabitable. And with more intensity, he has used it for Neuralink as humanity confronts the risk of AI’s “singularity.”

Futurism fits well into the capitalist economy. It spawned the relatively recent phenomenon of venture capital, an innovation that in many ways goes against the grain of traditional capitalist culture. Futurist investment, which often quite literally aims for the stars, doesn’t always produce winners. But that isn’t a problem if you end up owning a star that will keep generating energy throughout its lifetime.

The problem with futurism for the rest of society — that is, everyone other than the investors and the entrepreneurs — is that though it starts with predictable and credible technological innovation that relies on solid science and promises to revolutionize our way of life, it typically, if not systematically, ignores all pertinent social and economic reality.

Neuralink, for example, promises some limited and realistic medical advances that may alone justify the investment. But it also projects a dream of symbiosis between human will and unlimited AI. It could easily fail to be profitable. More significantly, its most extreme promises — like those of SpaceX and even Tesla — could only concern a small, privileged segment of humanity: essentially, the largely white educated elite. But its impact could destabilize the rest of society.

So, why do investors fall for it? Because they don’t care if it fails — others like it will succeed and the resounding successes will easily compensate for the multiple failures — and because there is absolutely no financial reason for feeling any concern about the effects on society. If rich people buy into it, it was worth the investment. If it takes off, and it can realize economies of scale, the moderately rich will also buy into it.

The investors also fall for it because they will always follow a charismatic marketer like Musk or Jobs. They believe in charismatic leaders whose best ideas are quite often borrowed from others rather than emanating from their own brains. It’s their marketing leadership that matters, not the quality of what they produce. 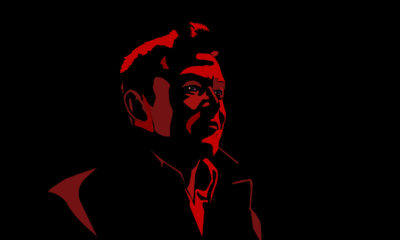