Who doesn’t play the politics of illusion? It appears to be the only game in town.

Some people today remember that, not so long ago, the power game we call politics still employed the two basic toolboxes Aristotle bequeathed to Western civilization in ancient times: rhetoric and reasoning. The political world we live in now has not only dispensed with reasoning, but also impoverished rhetoric and fully embraced the essence of hyperreality: exercising power through the creation of an illusion that replaces perceived reality.

Reacting to US President Donald Trump’s intention to fund his iconic border wall by declaring a national emergency, House majority leader Nancy Pelosi highlights the hyperreal nature of his intention: “If the president can declare an emergency on something he has created as an emergency, an illusion that he wants to convey, just think about what a president with different values can present to the American people.”

The ability to adapt to reality depends on the existence of what we may call a “lens of interpretation.” A lens can magnify, clarify or distort. Anthropologists and sociologists understand that every national or regional culture provides all members of that society with a set of values, assumptions and priorities that allow people to agree on the meaning of what they perceive.

For Pelosi, Trump’s wall is hyperreal. Even if it came into existence, it would not belong the reality. But she shouldn’t blame Trump. He didn’t initiate the trend toward hyperreality. And Pelosi herself has shown attachment to some of the key factors of US hyperreality, especially in her unshakable belief in “stakeholder capitalism,” in which capitalists are motivated, not so much by the obsession with profit as by responding to the needs of the community.

Hyperreal illusion works in two ways. First, it creates something that didn’t exist to replace our perception of what does exist. Second, it attempts to erase from our memory the embarrassing part of reality. If this week’s news is now dominated by Trump’s surreal wall and his unreal call for an executive response to an imaginary “emergency,” the controversy in the past week surrounding Democratic Representative Ilhan Omar offers an example of how hyperreality can go to great lengths as it seeks to deny the particularly embarrassing, everyday reality of political corruption.

Hyperreality has always existed in the nation of P.T. Barnum. In the mid 20th century It gained speed in politics thanks to a Cold War that required a fantasized version of a world in which good (capitalism) confronted evil (communism). President Ronald Reagan, a pure product of Hollywood, modeled it into a space-age crusade characterizing the Soviet Union as an “evil empire run by godless men,” the scary enemy of a righteous and fearless superhero.

Undoubtedly influenced by Francis Fukuyama’s thesis of the “end of history,” conservative columnist Charles Krauthammer gave the Bush administration his recipe for the active construction of the new hyperreality in early 2001, months before 9/11: “America is in a position to reshape norms, alter expectations, and create new realities. How? By unapologetic and implacable demonstrations of will.”

George W. Bush earned a reputation as the “worst president ever” by applying the neocons’ “implacable demonstrations of will” to everything — from unnecessary and unjustified tax cuts for the wealthy to the military conquest of the Middle East and the detecting of an “axis of evil.” Whether Trump is, as many claim, worse than the previous “worst,” he has clearly taken hyperreality to a stratospheric level.

Trump’s declaration of a national emergency at the border definitively establishes him as the P.T. Barnum of national politics. Trump’s actions have consistently demonstrated the extent to which hyperreality has replaced normal perception thanks to the “implacable will” of its perpetrators.

Take the telling example of corruption. Last week, establishment politicians, Democrats as well as Republicans, joined a chorus of lamentations about the “anti-Semitic trope” attributed to Representative Omar, who was merely reminding people of the type of corruption of which the Israel lobby is the agent as an explanation of the strangely one-sided foreign policy of the US with regard to the plight of Palestinians. Suggesting that Jews know something about how money can influence politics is, we are told, anti-Semitism because it evokes the “trope” of Jews and money. This effective strategy absolves Israel of its crimes as an occupying power and kills any discussion of the role of lobbyists’ money in Congress.

This is a far more aggressive accusation of corruption than Omar’s pointing to the American Israel Public Affairs Committee (AIPAC), whose raison d’être is to use its money to influence legislators. Caught off guard but playing the role of defender of the hyperreal version of democracy in which we are asked to believe that money plays only a minor role in politics, Todd responded with: “No, no, no… that… well, I… that’s interesting… I’m going to leave that there.”

Some quick thinking told him that his job was to respect the law of silence that his network and all mainstream media in the US adhere to.

This was a brief but revealing moment where we see a Republican commentator accusing one of his own of corruption, inciting the pro-Democrat TV channel MSNBC, to protect McConnell in the name of defending the political class as a whole and denying that corruption is at the heart of the system.

Sometimes reality breaks through the hyperreal veneer. But how many people would notice it? 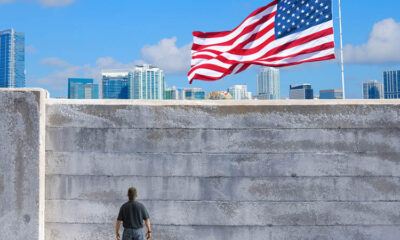 The Psychology of the Wall 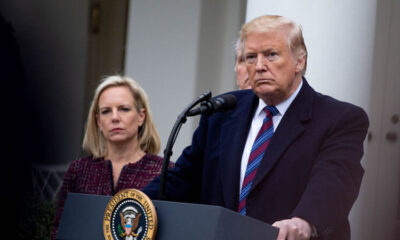 Will Trump Rule by Decree?