Baltimore has become the latest focus of African American anger over policing and deeper race relations.

It was only a matter of time before Baltimore erupted into racial violence. The city epitomizes urban deprivation and underdevelopment. In decline since World War II, when its population peaked at just under a million people, the city now has 600,000 residents — and two-thirds are African Americans.

Unemployment is around 9%, but it is twice that in Baltimore’s black community. The city has a history of troubled race relations going back more than 100 years to the development of segregated housing developments, which effectively “ghettoized” Baltimore’s African American communities in poorly serviced and cramped communities.

Now, Baltimore is the focus of violence with protests over the death — in police custody — of Freddie Gray, a young African American male, who died on April 19 of spinal injuries after being arrested and found in possession of a knife.

Gray’s death is just the latest in a recent spate of high-profile incidents involving white police officers and young black men. While Gray’s death is not quite so clear-cut as that of Walter Scott, whose death was captured on video after he was shot in the back by Officer Michael Slager, it continues to raise questions about policing of black-majority communities in the United States.

Gray’s arrest was videoed, and he was evidently alive and well when put in the police van, but within a short time he had suffered such severe injuries that he died in hospital. He was arrested by white police officers.

Baltimore is far from the only American city to have a problem with racialized policing. Indeed most American cities have exactly this problem, where black neighborhoods, usually the most economically depressed and disadvantaged, are perceived to be more closely and severely policed than affluent white areas. In many locations police forces are disproportionately white, even when the wider community is majority black or Hispanic. This reinforces the impression that police forces are there to control and contain the non-white communities.

In reality, Baltimore’s police force has more black officers than many comparable cities — though still a minority — and both the city’s police commissioner and the mayor are also black. One might imagine that the African American community would look on these figures of black authority with pride and that it would help to reduce tension between the police and the black community. In reality, for some at least, black officers are seen to be collaborators in the system of racial oppression — modern-day “Uncle Toms” who, by repeating the mantra of calm, peaceful protest, are only perpetuating a social system that marginalizes the most oppressed.

One question I always pose to students learning about the American Revolution is: “When is violent resistance justified?” Americans used a variety of tactics to resist British authority in the years before revolutionary war broke out, including economic boycotts and intimidation, but eventually they determined that armed resistance was the only way to achieve their goals. The same thought processes are going through the minds of rioters in Baltimore.

The deaths of young black men at the hands of the police are so common that it seems to some that nothing is being done to prevent them. How many peaceful marches have there been? What has happened as a result? There are laws in place to prevent excessive force being used by the police, but the chances of an officer being charged with any crime without overwhelming evidence are slim.

The pervasiveness of guns in American culture, staunchly defended by many politicians, does not help matters. Police do face armed criminals who are prepared to shoot at them, so they carry their own weapons and use them. The standard defense to any accusation of officers using inappropriate lethal force is that they “felt in fear of their life.” This argument is difficult to counter — officers should be able to do their job without risking their lives.

But the militarization of police forces has also proceeded apace with ex-army surplus equipment now routinely being deployed on the streets of US cities. This militarization ramps up the stakes with criminals. Instead of being armed with handguns or shotguns, criminals use assault weapons or sub-machine guns, and they face-off against police using armored vehicles recently seen in Iraq and Afghanistan.

American police may be trigger-happy — they killed more than 600 people in 2014 — but they also have a deeper racial problem that will not be solved overnight. There is a deep-seated fear of what is perceived as the armed and violent black man, something that goes back to slavery times, and the white response has always been equally violent.

Slave men were horribly abused in order to show others that resistance was not to be tolerated. Once slavery ended, lynching became the main method of exerting white control over black men. The guilt or innocence of each victim was not as important as the wider message sent to the black community.

The killing of unarmed young black men by white police officers continues this assertion of racial control in America. 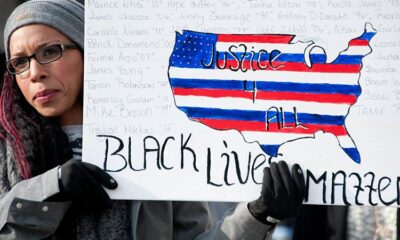