No one should be so delusional that they expect America’s embrace of its own “exceptionalism” to produce a better nation and a better world.

As someone who has never quite bought into American exceptionalism, I am exceptionally concerned that there are adults in America who are so unexceptional that unqualified exceptionalism sounds good to them. While I surely understand that national self-aggrandizement is a part of the fabric of national identity, it seems to me that blindly accepting anything as great is a quick ticket to disappointment when ugly realities intrude. This can be particularly troubling when professed national exceptionalism overwhelms evidence and sound judgment.

I was amused when living in the Republic of Georgia some years ago that the Georgians took great national pride in claiming to have invented wine. Whether true or not, the Georgians seemed to think it was true and that was enough to sustain Georgian national glory, even though their present seemed so rife with poverty, political unrest and threatened sovereignty. Put the wine of national exceptionalism on the table and confronting some uncomfortable realities was easily ignored.

It may come as a surprise to some, but I think there are elements of America’s framework that are exceptional in the positive sense of that word—the national park system, an interstate highway system that opened the nation to almost all, a willingness to rush to help in far off lands when tragedy strikes, to name a few. But the glow from our accomplishments can never be used to quiet those who remind the nation that there is much to do and that “exceptionalism” is not the preserve of one nation, one god or one person.

So it has been with some trepidation that I have watched the battle unfold between those blinded by exceptionalism and those seeking to regain it simply by proclaiming it. Hillary Clinton sees an America that is “great” now but can be greater if Americans work together to make it so. Donald Trump sees an America that once was great but is now a disaster that only he can make great again.

I was struck during the Democratic National Convention by a vision of an America that, freed of the burdens of self-declared exceptionalism, could join the rest of the world in seeking constructive solutions to intransigent human problems. I saw the possibility that America could confront its internal demons to maybe this time really eradicate poverty, make access to health care an affordable right, educate our children equally, reduce racial prejudice and begin to reverse a plague of senseless violence.

On the other hand, and memorably, Trump offered his solution to a broken nation: “Nobody knows the system better than me, which is why I alone can fix it.” His solution is him alone.

This statement should be startling to “exceptional” Americans and provide great comfort only to the “unexceptional” among us. While it is not hard to see that the party of Mitch McConnell, Paul Ryan, George W. Bush, Dick Cheney, Sarah Palin, Chris Christie and the like would jump on the Trump pathological narcissism and megalomania bandwagon, it is a bit harder to see Abraham Lincoln and the far too few “exceptional” Republicans doing so.

Hillary’s brand of exceptionalism is the old news of the day. We are stronger when we act together sounds good and leads to the usually selective laundry list of things that America supposedly got right—from inventing democracy to saving the world from the Nazis, the Russians and now the Islamic State. But after the balloons fell, there are still over 45 million Americans living below the poverty line and 33 million Americans living without health insurance.

And this does not even get to a nation armed to the teeth internally that kills at will externally. And it does not even touch the fact that many nations in the world already do many exceptional things for their populations that are still part of Hillary’s dream.

As for Trump, his version of exceptionalism seeks a return to a past “greatness” full of racism, exclusion, torture, guns at home and international killing fields abroad, blind patriotism and some undefined Judeo-Christian ethic. With almost half the nation seemingly disgusted with government in any form and hostile to a black president’s incremental accomplishments, Trump’s “exceptionalism” could prevail.

Yet through all of the talk of national exceptionalism and greatness, I didn’t hear anything about even trying to find a path to international peace and accord that reduces the killing fields on other people’s soil. I didn’t hear a word about ending the tyranny of the faithful or the intervention of personal gods in determining public policy. Nor did I hear anything about striving for a world where our resources are directed at reducing hunger and disease and fear, instead of increasing America’s resources by profiting from death and destruction at home and abroad. And I didn’t hear a word to question how “great” a nation must be to equate justice with assassination and guided drones with a noble cause.

Sad as it is, the world must hope that Americans drink enough of the fine wine of exceptionalism to follow Hillary to the White House waving those little American flags in mindless unison. But no one should be so delusional that they expect America’s embrace of its own “exceptionalism” to produce a better nation and a better world. That will take a lot of hard work by a lot of exceptional people serving a deeply flawed nation. 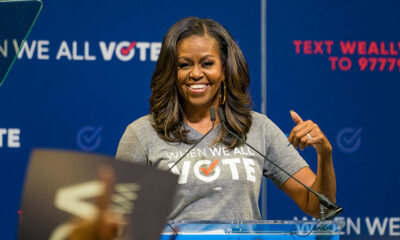 A Tale of Two Democratic Women 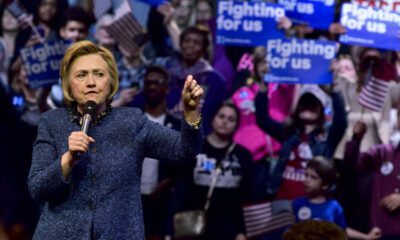