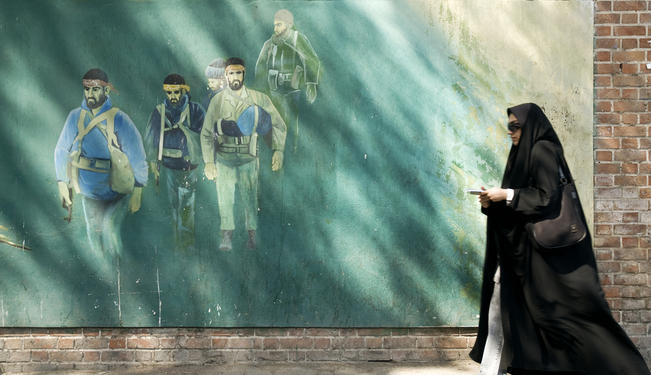 Marina Nemat, Iranian activist and author of “Prisoner of Tehran” and “After Tehran,” speaks to Fair Observer's Manuel Langendorf about the situation of women and human rights issues in Iran. Nemat argues that women's rights cannot be improved unless there is systemic change in the country.

After the ousting of the Shah in 1979, many Iranians hoped that a new era of freedom was about to begin. However, after Ayatollah Khomeini and his supporters managed to establish their hold onto power, many of those who were part of the revolution were imprisoned and tortured for opposing the new regime. Over 30 years after the revolution, Iranian activists like Marina Nemat, who experienced two years of imprisonment in the infamous Evin prison in Tehran herself, criticize the regime for its harsh repression of dissent and its imposing of strict Islamic rules governing the country in everyday life. This oppression is happening in the context of an upcoming presidential election on June 14 and years of sanctions against the country due to its nuclear program, which has dominated the discourse on the country.

Marina Nemat, born in 1965 in Tehran, is a prominent Iranian activist and acclaimed author of “Prisoner of Tehran” and “After Tehran.” In 2007, Nemat received the Human Dignity Award of the European Parliament. At the age of sixteen, she was arrested for protesting and spent more than two years in the Evin prison, home to numerous political prisoners in Iran until this day.

Marina Nemat speaks to Fair Observer about the human rights situation in Iran, particularly the discrimination against women, the need for radical change, and her petition to the United Nations. She stresses that Iranians inside and outside the country need to realize the discriminatory nature of religious laws. She also reflects on forms of protest by women in Iran, whether the upcoming presidential election will have any impact on women’s rights, and her personal role as a prominent activist living in exile.

Manuel Langendorf: How do you assess the current human rights situation in Iran, particularly women's rights?

Marina Nemat: During the past 34 or so years, since the success of the Islamic Revolution in 1979, Iran has been governed by a constitution that is based on sharia law, which openly discriminates against women and religious minorities, not to mention that it very much restricts any form of expression. Just as an example, according to Iranian law, the testimony of a woman is worth half of a man. So regardless of who the president of Iran is, the laws remain the same and does not allow any significant improvement to the human rights situation in the country. Let's not forget that the supreme leader (currently Ayatollah Khamenei) has veto powers over the parliament and the president. Also, presidential candidates need to be approved by the supreme leader, or they cannot run. Such undemocratic laws make freedom of expression and any form of religious and political freedoms in Iran impossible. So the greatest threat to freedom and democracy in Iran is really its constitution. But corruption, which is widespread, doesn't help.

Langendorf: What are the greatest challenges women face in Iran?

Nemat: There are two main challenges. First, the fact that Iranian law, which is based on sharia law, openly discriminates against women and gives them lesser rights in the society and puts many roadblocks on their paths. And second, women and men in Iran face a horrible dictatorship that has no tolerance for those who criticize it and speak out against injustice. Dissidents in Iran, men and women, are arrested and tortured and then imprisoned for long periods of time.

Langendorf: What do you demand from the Iranian government, in particular with regards to women's rights?

Nemat: Governments in Iran are puppets of the supreme leader and the notorious Revolutionary Guard. Under the circumstances, they would not respond to any significant demands. The whole system in Iran needs to be changed.

Langendorf: In your view, what do you think activists inside and outside Iran need to do in order to change the status quo for Iranian women? What lessons can be learnt from the fight for women’s rights in other countries?

Nemat: Iranians in Iran and abroad need to realize that religious laws are by nature discriminatory. The system in Iran cannot be reformed; it needs to be entirely changed.

Langendorf: In what ways have women in Iran advocated for change? Could you give an example?

Nemat: The most visible way that women in Iran fight the regime is by trying to look beautiful and break the hijab laws, and stand up to Iran's morality police. In Iran, wearing makeup and nail polish and tight clothing are political statements, and can easily send people to prison. Women also are very active in taking part in protest rallies against the regime.

Langendorf: What has the international community done to address the human rights situation, especially of Iranian women?

Nemat: The international community has failed and is failing the people of Iran. Since 1981, thousands of political prisoners have been tortured and executed in the country, and the world media and politicians have turned a blind eye to the situation, and so has the UN. Iran's nuclear ambitions are widely talked about in diplomatic circles and in the world media, but how about the suffering of the Iranian people in the hands of their own government? Thousands of young Iranians have been executed by the regime since 1981. Why doesn't the world talk about that? The main problem with Iran is its terrible disregard for the basic human rights of its own people.

Langendorf: What impact, if any, have sanctions against Iran had on the human rights situation?

Nemat: The way the sanctions have been handled, they have hurt the Iranian people more than the Revolutionary Guard and the leaders of the regime. The rich and the powerful in Iran have found ways to protect their interests and continue to profit.

Langendorf: Has the upcoming presidential election had an impact on women’s rights? Does it represent an opportunity for real change?

Nemat: Not much at all. Again, the only way real change can come to Iran is through a change of the constitution. The position of the supreme leader needs to be eliminated, and men and women, as well as Muslims and non-Muslims, need to be considered equal.

Langendorf: How do you see your role as a prominent activist and author living abroad?

Nemat: I am a witness to the atrocities of the Iranian regime and its crimes against humanity. I live to testify, and I give an average of five talks a week. Right now, I have created a petition directed at the UN at change.org, which asks the United Nations that every time it allows an Iranian official to speak, it should also allow a torture victim from Iran to bear witness and address the world from the same stage. The voice of the torturers should not be louder than the voice of their victims.

I will deliver the petition to the UN Human Rights Council when I speak there in June. I have been given two minutes to speak when Iranian officials get more or less unlimited time.