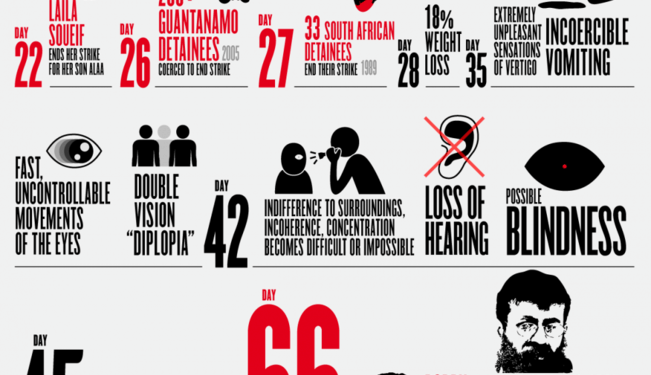 Throughout history, hunger strikes have been used as a form of non-violent resistance against injustice and oppression. Between December 2011 and April 2012, a cascade of hunger strikes among Palestinian political prisoners began as they protested their administrative detention. This policy, imposed by Israel, means that Palestinians can be detained in prisons without charge or trial for up to six months, a term that be renewed indefinitely. Since 1967, the equivalent of 40% of the Palestinian male population has been detained by Israel.

Visualizing Palestine released “Hunger Strikes” in February 2012 as one of those Palestinian prisoners reached the 66th day of his hunger strike. The visual has inspired conversations about prisoners on hunger strike elsewhere in the world, drawing parallels with the hunger strikes of Kurdish prisoners in Turkey, and those of protesters imprisoned in Bahrain.