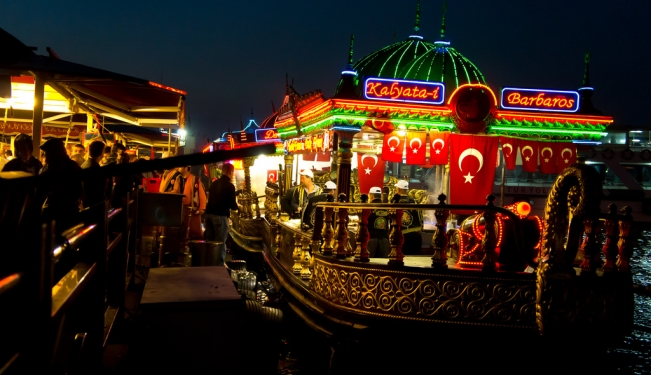 The tug-of-war over Turkey’s identity has become a major topic of foreign policy debate over the past few years. To deny the obvious, that it is not accepted as a natural European power, and that its Middle Eastern blood weighs heavier in its current politics, is impossible. Yet Turkey’s European roots and its longstanding ties to Western institutions keep it from identifying solely with its Middle Eastern neighbors. And it is that dichotomy that creates a momentous opportunity for Turkey to forge its own path in a changing world.

Turkey’s neighborhood has changed immensely since Sept. 11, 2001. American military action in Iraq and Afghanistan has not made the region safer or more stable – and American credibility has taken a big hit. Its unilateral superpower standing is gone in the past decade. Meanwhile the worldwide financial meltdown has also hit Europe hard, and there is a sense that the Western bloc is in decline. While it is still a big unknown as to what is emerging as the “new world order”, given the regional dynamics, it is vital that Turkey increase its cooperation with the Arab world. With the world’s 16th largest economy and with a majority of its population young, it has to keep its eyes open for the best interests of the nation.

Turkey faces two key questions. First, what will be its place and role in the new world?  Second and perhaps even more important, what role Islam will play in Turkey? Despite 88 years of effort, Turks still have yet to prove that Islam and democracy can coexist harmoniously. The current government, rooted in political Islam, argues that previous Turkish leaders have been hostile to Islamic traditions – and that Turkey is now normalizing. Others take a different view.

The government of Prime Minister Recep Tayyip Erdogan is leading Turkey in an unmistakably Islamist direction. Turkish society has always been conservative, but that element is being accentuated, especially when it comes to issues like women’s attire, women in the workplace, relationships between men and women and alcohol consumption.

The government’s new restrictions on alcohol are a prime example of increased conservatism. While Erdogan claims that he is following the constitution and protecting young adults from alcoholism, he also argues that making it more difficult for catering companies to serve alcohol at weddings and other events is a way to fit in with European norms. While there is an ongoing controversy and confusion over new restrictions placed on alcohol consumption in European nations, Erdogan’s comments on alcohol mark him as radically different to any European leader’s approach to alcohol consumption. Rather, in a slang language, which is literally impossible to translate into English yet nonetheless evokes the same sentiment, he exclaimed that he does not say a thing to those who drink alcohol until they “continuously sneeze and wheeze.” Last year, he said he could not understand why people drink wine while they could just eat grapes.

The point here is that a growing sensitivity to religious rules in Turkey is fueling a culture war. Support for the AKP is hard to come by on the coasts, from Istanbul to the Aegean and the Mediterranean; in fact, these regions are increasingly distressed by the direction of Turkey’s leadership. Erdogan’s government owes it to the citizens of Turkey to address these differences, and to clarify what it means by saying it is moving to “normalizing” the country and how it will stay away from becoming an Islamic Republic.

The Islamic republic of Pakistan, which represents a far stricter interpretation of Islam, for example, represents a cause for worry, particularly in light of the recent killing of Salman Taseer, the liberal governor of Punjab, over his opposition to blasphemy laws. The Pakistani reaction that his words brought about his assassination sends a chill through anyone who cherishes freedom and rule of law. While it will be a gross exaggeration to depict Turkish society as a whole as intolerant to people’s differences, its society is undeniably becoming more polarized. Therefore, one wonders if Erdogan worries Turkey turning into a Pakistan-style Islamic republic.

Erdogan’s obsession with Israel is a matter of concern to say the least. His comments on Middle East foreign policy, from his January 2009 outburst at Davos onwards, almost inevitably end with a verbal assault on Israel’s transgressions. Yet when it comes to any Muslim leader – even like Libyan leader Moammar Kaddafi who murders his own people in cold blood, he takes an exceptionally cautious approach in criticizing his insane acts of violence. To Erdogan, Israel has become an easy whipping target. He does not recognize Hamas as a terrorist organization and expresses no regret and no condolences when Israeli civilians are killed. As Erdogan’s constant rhetorical assaults on Israel and therefore the U.S. won over the Arab street, it also has a profound effect on Turkish public opinion, convincing Turks that it is Israel and the U.S. that are the primary threats to peace. This is the political environment in which Turkish identity and its national security interests are being redefined.

When the Turkish government tilts more heavily toward the Muslim Middle East, tension within the nation inevitably increases. But some evolving democracies like Turkey are beset with problems from the unresolved business of the past, which continues to haunt the present. Since its foundation, secularism and the Kurdish identity have been extremely sensitive issues in Turkey. Unless the country can find a way to unify, it is difficult to talk about peace and even preserving its youth and vigor.

In Turkey, many argue that one can overcome these challenges with a stronger democracy. In fact, the ruling AKP party claims the burgeoning democratization of Turkey as its greatest achievement. The AKP machine argues that the authoritarian chapter of the country’s history is drawing to a close, and a new democratic chapter is beginning. But Turkish democracy is hardly Athenian; under the 1982 military constitution, parties must receive a 10 percent vote to gain representation in Parliament. Parties must also reach a seven-percent threshold to be eligible to receive money from the state treasury. These restrictions were put in place by the 1982 military constitution. In brief, the state targeted its Kurdish origin citizens and took severe measures to keep them away from political participation.

One of the most frequently cited arguments about Prime Minister Erdogan is that there is no alternative. But the truth is more complicated. The state apparatus failed to solve the above mentioned issues in timely manner, was caught off guard.  Many believed that the U.S. invasion of Iraq was also meant to create an independent Kurdistan carving land from Turkey. When the AKP came to power for the first time in 2002, the voters simply wanted to give a lesson to the old guards who never fixed the country’s economic problems and were the targets of unending corruption allegations. While the conditions brought AKP to power, the Turkish state decided to back Erdogan too. It was perceived to be to the interest of the Turkish state to have AKP controlling all the east and southeastern provinces in Parliament.

To dig deeper into the AKP support, it is key to examine election results. In AKP’s first election, 46.5 percent of the Turkish electorate voted for candidates who were unable to reach the 10 percent threshold to get into Parliament. In the 2007 election, AKP claimed two and a half million fewer votes than the parties who reached the 10 percent threshold and below. In other words, Turkish democracy has a core problem in its representation and a large number of voters are not represented in the government.

These core handicaps make it tough to assess what is really happening in Turkey. After two terms, AKP is more in control of the country than ever. It has overhauled the military, justice and education systems – for the better, it claims. Yet, 42 percent of the population strongly disagrees. After the worldwide economic meltdown, unemployment has once again become the Turks’ main concern. While the AKP talks about strengthening Turkey’s democracy, one of the main tenets of democratic government is ensuring accountability. The powerful should be accountable to the people. In today’s Turkey, there is no system of checks and balances.

Now, it seems that power is beginning to change hands. The credibility of state institutions has been worn down. The AKP has taken over these institutions and is looking to eliminate the old guards, implying that Turkey’s politically religious and secular communities cannot coexist peaceably. And the two populations seem to be drifting further apart under the AKP’s leadership.

The AKP is seeking a third term in the June elections. Erdogan has promised to his constituency that he will change the constitution in his next term, considering changing Turkey’s government from a parliamentary system to a presidential one. These changes could be good for the country, but once again Erdogan’s talk about “normalizing” the country remains confusing.

Turks have to decide who they want to become, and what their future should hold. At the end of the day, the identity issue is really less about the West pushing Turkey away or the Middle East embracing it. Both depictions are untrue and only Turkey itself can decide what place it wants to take in the new world and what kind of role it wants for Islam.