Washington frequently feels the need to query “whither Turkey?”  Such an exercise is completely understandable, considering the country’s geo-strategic importance, location, and growing heft in world affairs.  However, intriguing as this question may be, it hardly reflects the reality of today’s Turkey.

It is often said that Turkey is a “bridge between East and West.”  Turkish society itself buys into this convenient shorthand, referenced in tourism brochures, corporate ad campaigns, and the two bridges which literally connect Europe to Asia.  While it is true that Turkey serves as such a bridge, so might Oklahoma, along with any other point on the planet located beyond the North or South Pole.  The expression means nothing, outside of a geographic mindset prominent in textbooks intent on carving out a space for a “West” and an “East.”

One group intimately involved with the reality on the ground from the medieval period onwards clearly has no inclusive place in this narrative: Muslims.  Of course, neither do the people of the New World, East Asia, South Asia, or Sub-Saharan Africa (except as subalterns). However, these regions were less frequently direct interlocutors of the “West” as classically conceived. Frankly, Islam is the “East” which the “West” originally defined itself against (and vice-versa, to be fair).

Atatürk’s Turkey has long presented a conundrum for this narrative.  Maturing in the era of Europe’s greatest global triumph, and coming to power in the immediate wake of the Great War which ensured European dominance in the formerly Ottoman Balkans and Middle East, Republican Turkey’s founding father was determined to reach an advantageous arrangement with the powers of his day.  Never suffering from timidity, the visionary president went for the cultural jugular through his famous 1927 language reform.  With a stroke of his pen, months of heavy persuasion, some targeted repression, and an army of well-paid teachers similarly motivated by his generation’s clear identification of “West” with “modern,” the Turkish state managed to completely reinvent its society’s language, and thus identity, within a matter of months.

This language reform, frequently presented as a simple alphabet conversion, signified far more, both within Turkey and among those who keep score on the game of “East vs. West.”  By changing over from Arabic to Latin letters, Turkey in one stroke managed to identify itself culturally with Latin Christendom, portray each of its neighbors as more “Eastern” than itself, cut itself off from its own historical sources, render its older population illiterate, and privilege all youth and intellectuals who were prepared to buy into the generalissimo’s cultural revolution.

Just as Atatürk’s reforms psychologically transformed Turkey into a bridgehead of the “West,” his successors jumped on the chance to sign Turkey up as a member of NATO in 1952; moves by which today’s leaders affect the great “East vs. West” debate.  However, what has shifted beyond recognition is what these two imaginary poles have come to mean – and what that means for the average Turkish citizen.  In the secular 1950s, being part of the “West” meant serving honorably on the front lines of the Cold War against a somewhat amorphous “godless Communism.”  Today, it effectively means serving on Samuel Huntington’s civilizational “blood borders” against the threat of “militant Islam.”  For many Turks, such an agenda means denying their own cultural and religious heritage to a level not even dared by Atatürk in his most intemperate moments.  Effectively the “West” has meandered yet again, this time reverting to a definition of itself which no longer interests most Turks.  Rather, many now tend to view this “West” as much a threat to themselves as to co-religionists in points south and east.

While Washington rightfully frets over Turkey’s direction, its own population continues to fret over the sort of things people elsewhere worry about: where their next paycheck is coming from, if can they travel freely, and how their property values are holding up.  On the state level, Istanbul gentrification, ethnic conflict via urban youth gangs, the ruling party’s hyper capitalist economic strategy, and the Foreign Ministry’s attempt to achieve “zero problems” with Turkey’s neighbors are the sorts of debates which exorcise more Turks today.  None of these issues lend themselves to a facile “East-West” paradigm.

As some commentators never tire to point out, Turkey has seen in recent years a modest rise in religiosity, and a concurrent drop in the social legitimacy of secularism.  However, the broad accuracy of such changes begs the question of “why” as much as “whither” as well as the role of the self-proclaimed and self-defined “West” in influencing these changes. 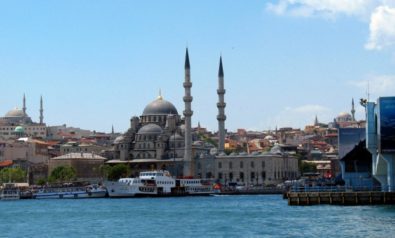